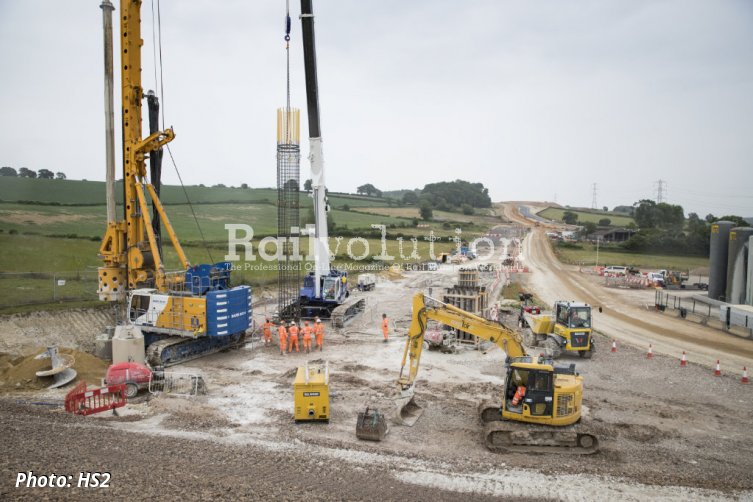 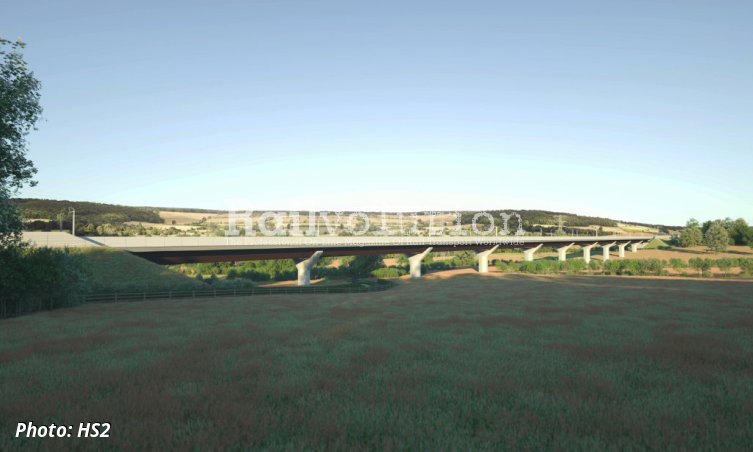 In early July 2022, HS2 ground engineers have started work on the high speed rail project’s Wendover Dean Viaduct, with an expert team sinking the first of more than 50 concrete piles that will form the foundations. Located south of the village of Wendover in Buckinghamshire, the 450 m long viaduct will be the first major railway bridge in the UK to be built with a ‘double composite’ structure, using significantly less carbon-intensive concrete and steel in comparison to a more traditional design.

Over the summer, engineers working for HS2 Ltd’s main works contractor, EKFB - a team made up of Eiffage, Kier, Ferrovial Construction and BAM Nuttall – will construct 53 concrete piles to form the foundations for the structure. On top of each group of piles - which will range from between 38 and 46 m deep - a concrete pile cap will support the pier which will in turn support the weight of the bridge structure above. Instead of hammering the piles into the ground, holes will be bored before being backfilled to create the pile.

The piers - some of which will be up to 14 m high - will be cast as shells before being assembled on site and filled with concrete. This approach will reduce the amount of work on site and cut disruption for local residents. The first ‘double composite’ beams will be installed next year. EKFB worked with their design partner, ASC (a joint venture between Arcadis, Setec and COWI) and specialist architects Moxon on the ‘double composite’ approach which was inspired by structures on the French high speed TGV network.

Instead of using solid pre-stressed concrete beams to form the bridge spans, the viaduct will use two steel girders sandwiched between two layers of reinforced concrete to create a lightweight and super strong hollow span. This approach is set to save an estimated 7,433 tonnes of embodied carbon within materials - the equivalent of someone taking 20,500 return flights from London to Edinburgh - and help HS2 achieve its goal of halving the amount of embedded carbon in construction.

As well as cutting the amount of carbon-intensive concrete and steel, the slender design also reduces the silhouette of the structure viewed from across the valley. Nine evenly spaced piers will support the deck of the viaduct and will be placed to carefully reflect the near symmetry of the ground beneath. The beams themselves will be made from weathering steel, which will age to a characteristically dark russet finish and echo the natural tones of the surrounding landscape.

When viewed from a distance, against the weathered steel, the pale concrete parapet will appear as a thin horizontal band hovering over the slender piers as it glides over the valley and make the whole structure look thinner. This effect will be further emphasised by the viaduct piers, which have been extended to almost connect with the parapet, helping to give the appearance of a light and narrow structure.

Once construction is complete, the historic field boundaries and hedgerows will be recreated to provide uninterrupted access for farmers and local residents. A mix of trees and shrubs commonly found across the Chiltern chalk hills will be used for new woodland planting around the viaduct, including Oak, Beech, Hazel and Wild Cherry.