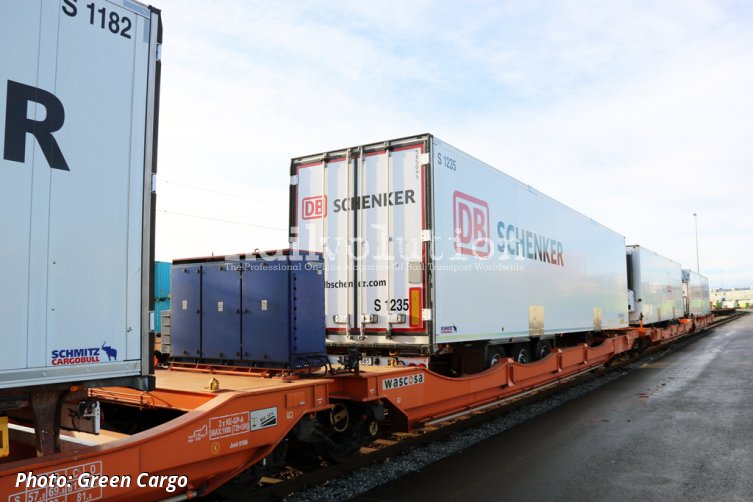 In a partnership between Schenker AS and Green Cargo, modified refrigerated wagons will be tested from December 2020 for Schenker’s North Rail Express (NRE) on the Oslo - Narvik route. The wagons, which acquire power supply from the locomotive, create a new solution and offer substantial opportunities to move the transports of temperature-controlled goods off the roads and onto the railway, resulting in environmental benefits and a considerable reduction of carbon emissions. The solution would lead to 13,000 fewer trucks and trailers on the road network each year.

Furthermore, operation of these new „electrified“ wagons using electricity from the locomotives rather from the diesel generators on wagons as used today creates additional carbon dioxide savings. The tests, which are now underway, involve Green Cargo supplying Schenker’s trains with two electric powered wagons for one rake, and they will run until April 2021. The tests are evaluated in real time and, provided the wagon type works as expected, there will then be the option of additional wagons. If the tests are successful, the operator currently has the option of scaling up the number of consignments on short notice.

Wascosa’s solution is a wagon adapted for intermodal set-ups with 20’, 40’ and 45’ containers as well as trailers. The technical solution entails connecting the refrigerating device of wagons to the locomotive using a head-end power cable that converts the power supply to three-phase and 400 V. Annette Bernström, Wagon Manager at Green Cargo, said: "We have made minor adjustments to the wagons so that they suit the consignments. The tests we are now conducting will also indicate whether further adjustments are required, or if anything else needs to be further developed.“

Typically, diesel generators are used for the wagons that transport refrigerated goods. These gensets consume an average of 2.5 liters of diesel per hour. The running time for a single stretch between Oslo and Narvik is between 28 and 30 hours. For these shipments, the new solution with electric powered wagons would reduce carbon emissions from fossil fuels by about 122 tonnes per year.

The wagons will continue to have diesel generators as back-up power supplies should unforeseen occurrences arise during transport, and the combination of electricity and diesel enables more efficient loading at the sender and unloading at the recipient because the power supply is stable and does not cut out.