H2goesRail - DB And Siemens Will Test The HMU 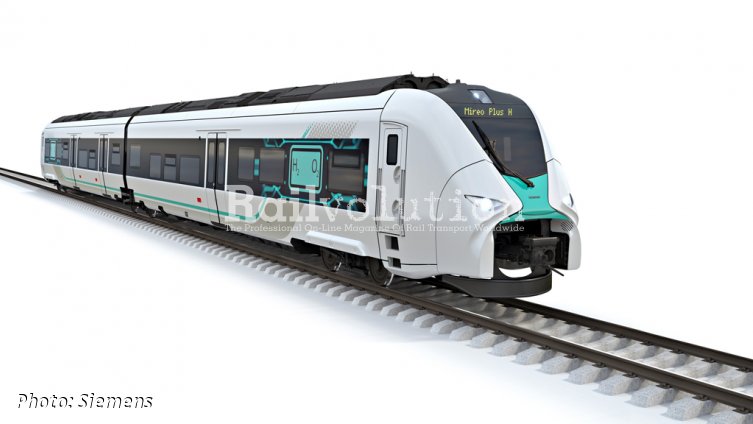 Deutsche Bahn and Siemens Mobility are driving forward the climate-friendly transition in rail transport and will test the use of hydrogen trains for the first time. The aim is to test a completely new overall system consisting of a newly developed train (HMU) and a newly designed filling station. DB will refit one of its maintenance works for servicing the hydrogen-powered trains.

The system consisting of trains and infrastructure is intended to replace DMUs operating on regional routes and further reduce CO2 emissions. A one-year HMU test in the region around the city of Tübingen is planned. The government of Baden-Württemberg is providing support for the project, and the Federal Ministry for Transport and Digital Infrastructure (BMVI, Bundesministerium für Verkehr und digitale Infrastruktur) has announced its intention to fund the project.

The prototype that Siemens Mobility will build is based on its Mireo Plus regional train. The two-car unit will be equipped with a newly developed hydrogen drive. The new Mireo Plus H will be as powerful as Mireo EMU and will have an operating range of up to 600 km. The 160 km/h train will have a 1,700 kW traction power providing up to 1.1 m/s² acceleration.

DB is developing a new type of fueling station that can refuel the train in the same time as a diesel-powered train. The hydrogen will be produced on site in Tübingen using traction electricity generated from renewable sources. DB will partially refit its maintenance works in Ulm to service the new HMU. During its planned test operation between Tübingen, Horb and Pforzheim in 2024, the train will replace a conventional DMU. The line is particularly suitable based on the timetable intervals and topography, around 120,000 km of scheduled service are planned. The new HMU is expected to save around 330 tons of CO2 in one year.

DB currently operates around 1,300 diesel-powered trains in regional service, and roughly 40 % of DB’s 33,000 km network is not electrified. In addition to the option of further line electrifications, the use of hydrogen-powered trains offers one possibility for DB becoming climate-neutral.

Green electricity is used to produce the environmentally friendly green hydrogen; DB Energie will be responsible for its supply and will develop, test and optimise the necessary hydrogen infrastructure. The hydrogen is produced by electrolysis in a DB Energie mobile filling station at the DB Regio works in Tübingen. In the so-called electrolyser, water is split into hydrogen and oxygen by means of electricity. Compressed by a compressor, the hydrogen is stored in a mobile storage unit. Prior to the refueling process, the fuel is processed and cooled in the adjacent tank trailer. The mobile structure makes further test projects possible.

Siemens is developing a two-car HMU with a fuel cell and a lithium-ion battery. The two-car Mireo Plus H will have an operating  range of 600 km, depending on conditions such as the season or the route. A three-car version will have an operating range of 1,000 km. The train will be refueled with hydrogen in a novel process: for the first time in 15 minutes, taking no longer than refueling a DMU. This is an important factor considering the closely timed DB train diagrams in regional traffic. Extensively trained DB Regio staff who are supported by Siemens Mobility employees can then maintain the hydrogen train(s).