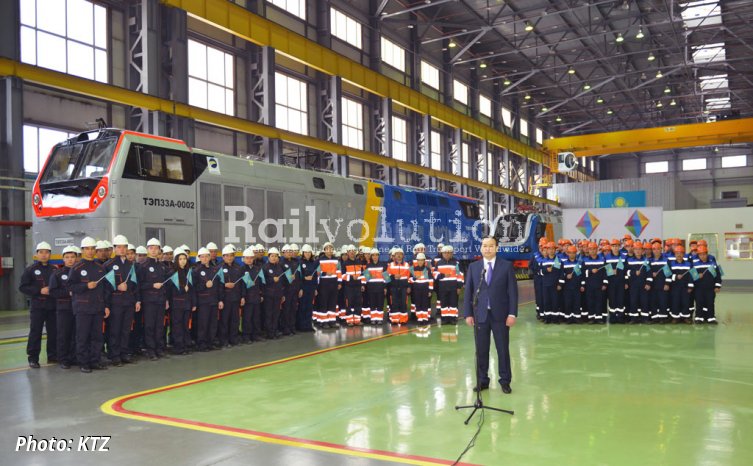 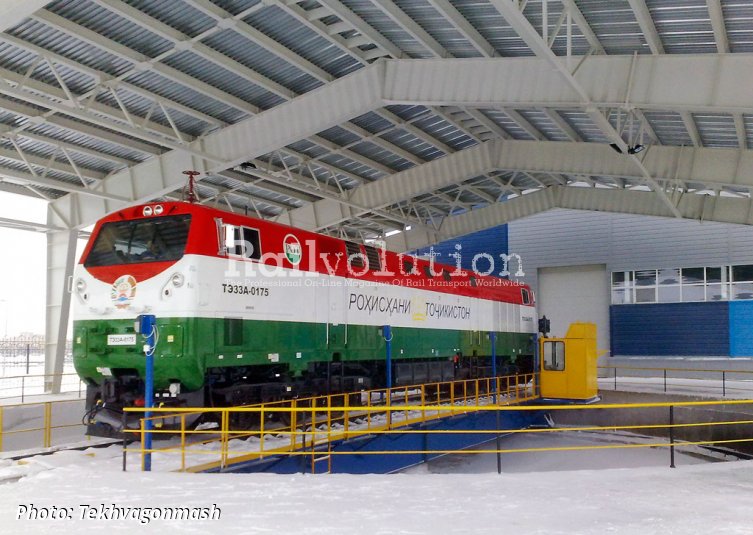 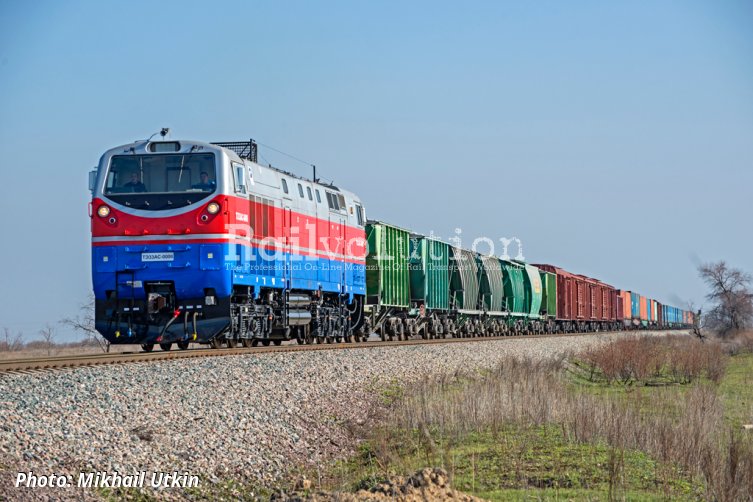 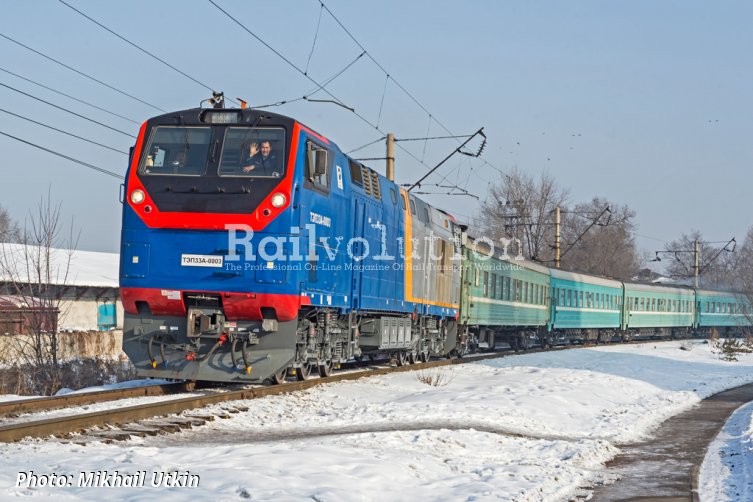 The creation of LKZ (Локомотив құрастыру зауыты - Lokomotiv kurastyru zauyty, i. e. Locomotive Building Works) stems from the fact that Kazakhstan, like most ex-USSR countries, urgently needed to modernise its railway rolling stock. Initially it looked as though only two options were open. Either the country embarked upon a major programme of buying new locomotives from foreign manufacturers, or the existing motive power fleet could be modernised. Although the modernising of diesel locomotives was started in 1997, when one section of 2TE10M-0736 was sent to GE’s Erie works for the groundwork for such a project, there was however also a third possibility - the development of a domestic railway rolling stock industry.

An analysis of the needs of the 1,520 mm gauge railways in the states of the former Soviet Union supported this strategy being adopted by the government’s Kazakhstan State Priority Industrial-Innovative Development Programme. In September 2006 the Kazakhstan Temir Zholy (KTZ) reached an agreement with General Electric, and KTZ thus appointed a team of specialists to develop a set of specifications pertaining to the future design of a main line single-section freight diesel locomotive adapted to the specific characteristics of the country and its rail network. Factors to be taken into consideration included the climate, the state of the rail infrastructure, the types of freight to be handled and the need to comply with 21st century hygiene and environmental requirements.

A new factory in Astana was built in 2007 - 08, at that time called TOO Lokomotiv Leasing (TOO stands for „tovarishchestvo s ogranichennoy otvetstvennostyu“ - Limited Liability Company), and inaugurated on 3 July 2009. That same day this KTZ subsidiary was renamed to Lokomotiv kurastyru zauyty and founded as a joint stock company. Its first goal was to build a batch of 120 km/h fifth-generation Class TE33A Evolutions.

The first ten of these locomotives, which are GE’s Type ES44ACI, were to be built in the USA, while following 300 were to be assembled in Kazakhstan. Between October and December 2008 GE’s Pennsylvania works built TE33A-0001 to 0010, which arrived in Kazakhstan in January 2009. The TE33As, which are fitted with a 12-cylinder, 3,356 kW diesel engine, became the first locomotives with AC traction technology in the KTZ fleet.

The first locomotives to be outshopped were essentially kits of components supplied by General Electric, but subsequently an ever-increasing number of the components used has come from domestic suppliers: 32 %, or over 11,000 types of component for each locomotive in 2013, rising to 52 % in 2014. One of the basic components being produced now in Kazkahstan are the Evolution bogie frames, which since the second half of 2013 have been manufactured by LKZ.

The LKZ works are equipped with machine tools supplied by the world’s leading manufacturers. Some of this equipment enables metal sheet between 4 and 80 mm thick to be cut using gas, plasma and laser machines supplied by German and Swiss manufacturers. These capabilities are exploited by EKZ, too, this being a rational step, since Transmashholding has a share in both companies. In the second quarter of 2014 LKZ started producing a large number of components required by the new nearby EKZ works, where a batch of Class KZ8A electric locomotives is being built.

On 12 March 2014 LKZ held a „round table“ with various Kazakh private operators, such as Kazfosfat, Bogatyr Trans and Lokomotiv-2030, to discuss the manufacturer’s new project for a modern diesel shunter. It has been stated that the prototype is to be built in 2015 and LKZ plans to offer it not only in Kazakhstan, but also in other CIS and Baltic countries.

Under the state industrial development programmes, KTZ is contributing to the development of Kazakhstan’s domestic railway industry, working together with some of the largest locomotive and rolling stock builders in the world to modernise its fleet, while simultaneously assisting the development of the Kazakh economy. The Kazakh government, under an order issued by then president Nursultan Nazarbaev, has thus in a very brief period of time created for Kazakhstan a virtually new industrial sector - railway engineering. In 2008 this generated just 10 billion Tenge for the economy, and in 2013 over 200 billion Tenge (0.8 billion EUR at that time) - a 20-fold increase. Further growth of this sector was expected to result in around 300 billion Tenge generated in 2015.

There are various joint projects in Kazakhstan for development of the domestic railway industry, including one with the Chinese company CSR (now CRRC) for building diesel shunters. In Astana the Special Economic Zone of СЭЗ Астана-жаңа қала (SEZ Astana-Zhana kala, Astana New City), with an area of 7,562 hectares, has been developed for this purpose on the east side of the capital. Apart from LKZ the Tulpar-Talgo (Tұlpar-Talgo) factory, which produces rakes of Talgo stock for KTZ, is situated there. It was inaugurated in December 2011 by President Nazarbaev. Tulpar in Kazakhstan mythology is a winged horse (the equivalent of the Greek Pegasus).

In 2010 the EKZ joint venture was formed by Remlokomotiv (a KTZ subsidiary, with a 50 % share), TMH (25 %) and Alstom (25 %). EKZ stands for Электровоз құрастыру зауыты - Elektrovoz kurastyru zauyty (i. e. Electric Locomotive Building Works). The foundation stone of the new works was laid on 26 June 2010, and it was inaugurated on 4 December 2012.

It was decided to build the EKZ works in the SEZ of Astana because the well-equipped LKZ, which was also in a position to act as a domestic supplier of components, was situated nearby. Several other factors contributed towards this decision: the industrial infrastructure with its road connection was ideal, rail access already existed, and the site was not far from the city centre.

In June 2013 LKZ won an order from EKZ for the production of metal components for Class KZ8A electrics. This order involved the manufacture of no fewer than 1,800 types of component, comprising in total around 20,000 individual parts to be fitted to each double-section locomotive - components for the bodyshells and bogies. In July 2013 - just one month later - the first bogie frame was completed, using the existing LKZ engineering facilities and workforce. Since the preliminary order for LKZ in 2014 consisted of 34 bodyshells, 24 roofs, 56 bogies and 112 wheelsets, an increase in the amount of machine tooling equipment has been necessary.

On 4 July 2013 at Astana-Zhana kala the foundation stone of the new factory for the manufacture of GEVO diesel engines for locomotives was laid. This establishment was known as the TOO Astana Dizel Endzhens (Astana Diesel Engines). The objective was to reach an annual output of 300 engines, of eight-, 12- and 16-cylinder versions, and rated at between 2,200 and 4,500 kW. There were three business partners backing this project: KTZ, GE Transportation and TMH.

The factory initial task was to supply diesel engines to LKZ, to increase the contribution of domestic production for components for the Class TE33A locomotives and their derivatives. Some models would also be built suitable for powering ships. It was intended to develop export markets in all the CIS member countries and in Mongolia. In 2014 it was planned to produce 8 % of all components for these engines in Kazakhstan, increasing this share to 53 % by 2020. The present situation of the factory was described here.