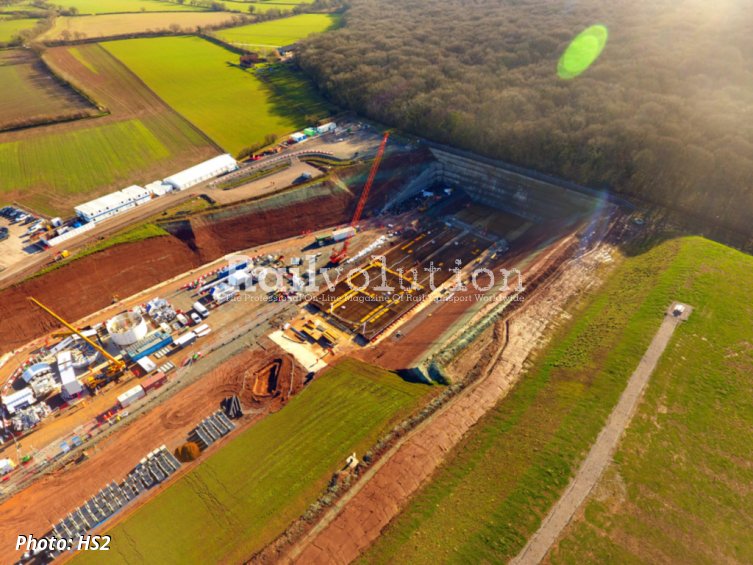 Midlands-based construction firm, Collins Earthworks, has completed excavating the north portal site of Long Itchington Wood Tunnel, ready for the launch of the tunnel boring machine that will dig under the ancient woodland in Warwickshire. The company, with headquarters in Ripley, Derbyshire, is contracted to HS2’s main works contractor BBV Joint Venture (Balfour Beatty Group and VINCI Construction), which is responsible for building the northern section of HS2 as it heads into Birmingham.

Since April 2020, 120 people from Collins Earthworks have worked on the HS2 site, with a number of new plant operatives also employed from the area, providing jobs for local people during the pandemic. The team has excavated 300,000m3 of soil, with the topsoil and subsoils stored and separated with a layer of straw, so they can be put back in the same way after the tunnel has been built.

At the busiest period there was a total of 35 machines on the site, all utilising the latest technology to lower emissions. The company’s construction fleet uses state-of-the-art fuel-efficient engines, with exhaust systems that efficiently break down Nitrogen Oxide gases into harmless elements before being expelled from the vehicle. They have also introduced a new CAT Electric Drive Dozer, and only use lorries with EURO 6 compliant engines.

Safety is key for the company, who work closely with BBV to ensure the highest safety standards are met on site, earning them a Gold award from The Royal Society for the Prevention of Accidents (ROSPA) for the last three years. They have also been working with BBV to promote safety around local schools through virtual assemblies.

The yet-to-be named 2,000 tonne tunnel boring machine is currently arriving at the prepared site in pieces from Herrenknecht, and will be reassembled ready to start digging the tunnel in the summer. It will take five months to dig the first bore of the tunnel, then it will be extracted at the south portal before being transported by road back to the north portal to commence the second bore.

Next month, people in Warwickshire will be invited to suggest names for the tunnel boring machine that will then be shortlisted for a national vote during the summer.

Aiden Goggins, BBV’s Construction Director at the Long Itchington Wood Tunnel site said: “The Long Itchington Wood Tunnel site is one of the project’s largest, and Collins Earthworks have worked for nearly a year to carefully excavate material which will be reused to form environmental embankments and landscape for the railway. The tunnel in this location preserves the ancient woodland, so forms a key element in how we are managing environmental impacts through the design of the railway."

Collins Earthworks is committed to providing training to the younger generation, providing apprentice places on HS2 sites. The company continues to prepare HS2’s sites at Long Itchington south portal, Washwood Health, Bromford Tunnel portal, and at the A46, M6 junction 4 and Marston Lane, where further opportunities will also be available.

At the peak of construction on the whole of Phase One, ten tunnel boring machines - each a self-contained underground factory - will work 24 hours a day, 7 days a week. Weighing up to 2,200 tonnes, each 160m long machine will bore and line the tunnels as they drive forward at speeds of up to 15 m per day.