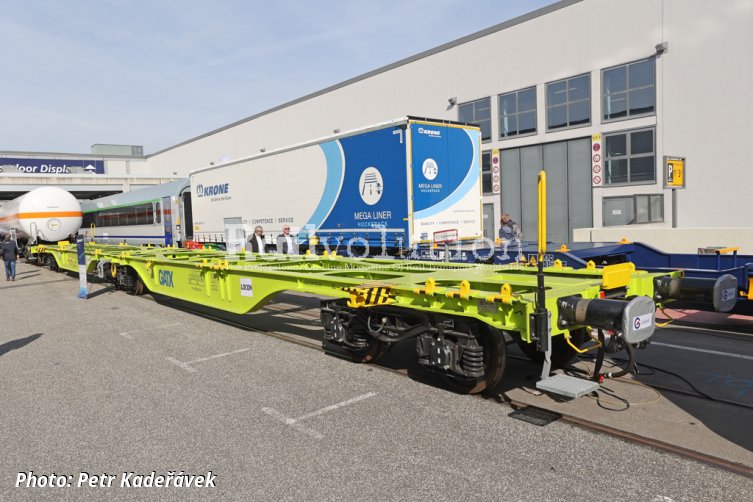 In addition to the traditional exhibitors, two Turkish wagon manufacturers presented their vehicles on the outdoor area.

Gökrail is a brand of GÖK YAPI which is active on fields freight wagons manufacturing, category A buffer, draw gear and wagons’ accessories production. Gökrail was established in 2008, with manufacturing site in Sivas, and building complete wagons since 2017, exporting them now to many European countries.

At InnoTrans, it exhibited Class Sggmrss articulated 90' container wagon, which is a standard version of this wagon. However Gök Rail managed to design a new version with 27.0 t tare, instead of 28.4 t, which was weight of its earlier design. It resulted in corresponding payload increase, which is now 108.0 t at 100 km/h speed and 93.0 t at 120 km/h. Length over buffers remains 29,590 mm, a standard measure for 90' wagon.

According to the customer of the wagon, the tare decrease was achieved by optimizing the structure and by using bogies without front beams with a compact brake (supplied by Wabtec). However, this results in a top speed of only 100 km/h when loaded, as no type of composite K-blocks has yet been approved for use in a compact brake for a speed of 120 km/h when wagon is loaded.

The exhibit was painted in GATX Rail colours, belonging to a series hired to LOCON LOGISTIK & CONSULTING, German railway undertaking, which is a subsidiary of Czech company EP Logistics International and hence EPH holding.