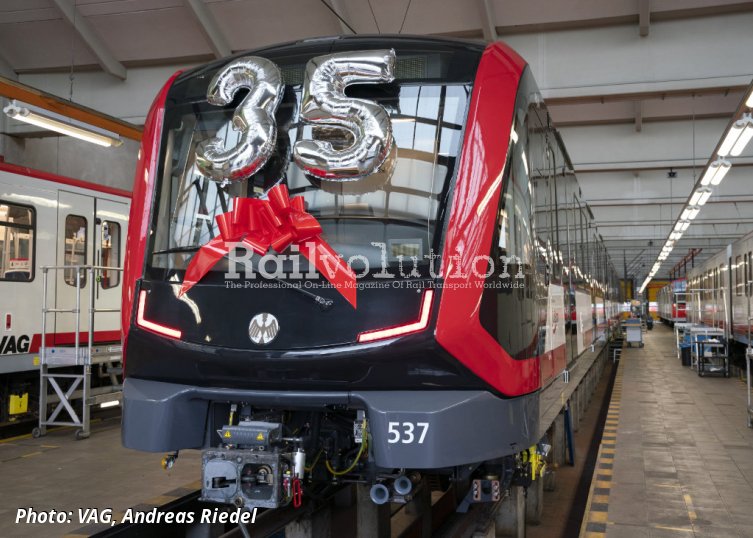 Since 27 October 2022, VAG Nürnberg has all 35 new Type G1 metro trains available for passenger service. The four-car units are in service on the U1 line Langwasser-Süd - Fürth-Hardhöhe. For VAG and Siemens Mobility, this is an important milestone in a process that has taken around ten years from the first idea to the present day.

In August 2020, VAG put the first three new G1 units  into service. On the U1 line, the range of vehicles available to passengers has changed completely since then: from occasional runs at the beginning the G1s are now completely in use on the U1 and also characterise the cityscape accordingly. The testing process of the new trains and their introduction were in the foreground in the past two years.

The completion of the commissioning process is not the end of the overall project for both teams. There are still some tasks that have only become apparent in operation or after some time. There is still some fine-tuning to be done - especially in the software. Siemens is and will remain active until VAG have a fleet that is as perfect as possible. Although the trains have a certain warranty period, a Siemens cooperation with VAG continues beyond that within the framework of a system support contract.

With the new G1 units, VAG has an efficient means of transport that makes the U1 fit for the traffic turnaround. The metro is also Nürnberg's most efficient means of transport overall, which incidentally will look back on 50 years of operation in 2022. The U1 with a length of 18.5 km and 27 of 48 stations is the longest of city’s three underground lines. In the meantime, the fleet of G1s, which have already been approved, have covered a total of around 3.3 million km.

The G1 sets replaced all half-sets (Doppeltriebwagen) of the DT1 and DT2 series. From the DT1 fleet, only two half-sets are still occasionally in passenger service as a so-called long train, which was designed as an anniversary train on the occasion of the 50th birthday of the Nürnberg's metro.

The G1 is pre-equipped for possible automated operation at a later date (e.g. removable driver's cab, additional installation spaces and cabling routes). After tests, it could be used in mixed operation with automatic trains on the U2.