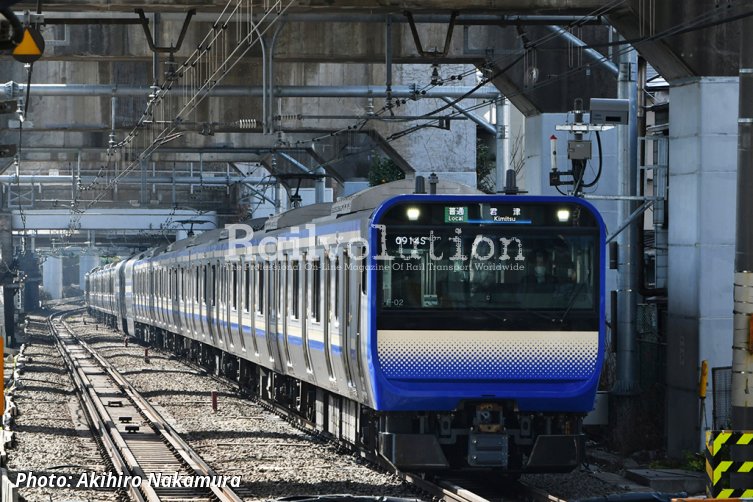 The Class E235 EMUs are well known for travelers in Tokyo because of its presence on central Tokyo circular Yamanote line. The prototype test runs began in 2015 and batch production started in 2018. In 2020 there are fifty 11-car EMUs providing service on this busy Yamanote line.

JR East ordered 51 eleven-car and 46 four-car units (745 cars) from J-TREC. The first train was completed in April 2020 in Niitsu J-TREC factory located in Niigata prefecture at north-west coast of Honshu island. To date (March 2021) 14 trains were delivered to JR East's Kamakura depot. E235-1000s are operated mainly in 15-car formations, the main difference from Yamanote line's E235s mentioned above is that E-235-1000s have two double-deck green cars (First Class) No. 5 and 6.

The bodyshells are made of stainless steel. Each car has a length of 20 m, a width of 2,950 mm and a height 3,620 mm, except the Green Class cars which have a height of 4,070 mm above rail top. The 11-car 1,067 mm gauge trains have six intermediate powered cars and five trailing cars. Short four-car formations have two powered cars and two trailing ones. Each powered car has four 140 kW traction motors, fed by SiC inverter.

The new EMUs are equipped with JR East's train and maintenance management INTEROS system (INtegrated Train communication/control networks for the Evolvable Railway Operation System). These new trains are replacing the Class 217 EMUs built between 1994 and 1999 and refurbished between 2008 and 2012.