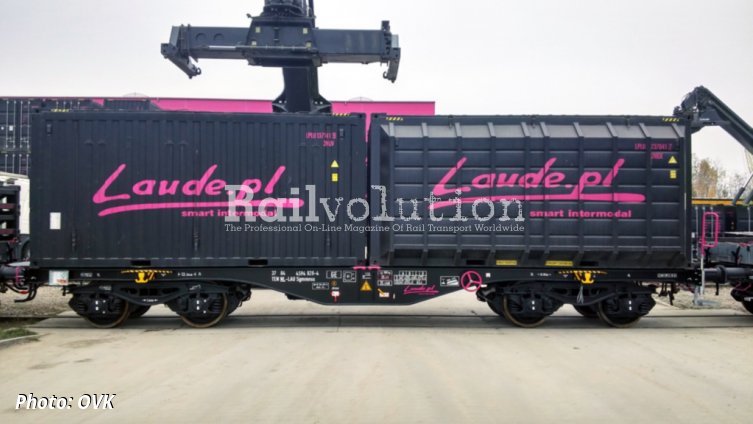 On 2 June 2021 OVK (UWC) announced that  it has obtained the type approval for its Class Sggrs(s) 80’ six-axle and Class Sgmmns 40’ four-axle flat wagons from the European Union Agency for Railways. It will allow operation of these wagons on European network according to Directive (EU) 2016/797. For the first time in modern history, Russian wagons will be operated in Europe on a 1,435 mm gauge network. OVK’s current orders for European countries exceeds 1,000 wagons. Of them 200 Class Sgmmns wagons were ordered by Laude (their delivery finished recently), 270 wagons were ordered by DB (their delivery is in progress at present).

The European Regulator issued the permit based on the results of wagon testing, production audit and series of certification tests for compliance with TSI, organised by the Czech Railway research institute VUZ, an authorised certification body accredited by the EUAR. The wagons designed for heavy containers have passed successfully the strength tests for static load and impact, static and dynamic brake tests, dynamic and strength testing in motion, and noise impact tests.

Moreover, as part of the technical acceptance process, the client’s representatives performed a comprehensive assessment of technical specifications of the batch-built wagons for compliance with the European standards. Thus, over 100 key parameters of the Class Sggrs 80’ wagons were assessed, including size checks, brake system tests, paintwork inspection, non-destructive weld control, etc.

The wagons have been developed by the OVK’s engineering centre and are manufactured at TVSZ. Thanks to its articulated structure, the Class Sggrs(s) 80’ flat wagon has a 108 t payload and allows transportation of variously sized containers with a gross weight of up to 40 tonnes.

The Class Sgmmns 40’ wagon features improved technical specifications compared to similar cars currently available on the European market, such as smaller tare weight of 15.5 t (compared with tare weights of 16 t and higher for its common counterparts). The flat wagon has a 74.5 t payload and measures 40 feet in length. Both wagons are equipped with 22.5 t axle-laod bogies.

Victor Dolgov, Deputy CEO, Production and Supply at OVK said: „The approval of the batch-built wagons by an European authority represents a significant step forward for us both in terms of fulfilling our contracts and as part of the development of company’s export strategy. We have been preparing for this seriously for a long time and we are delighted that our products will be used in Europe. We would like to express our gratitude to the Trade Mission of the Russian Federation in Germany, whose effort and support made it possible for our specialists to attend the rolling stock acceptance procedure despite the severe restrictions in place due to the coronavirus pandemic.“