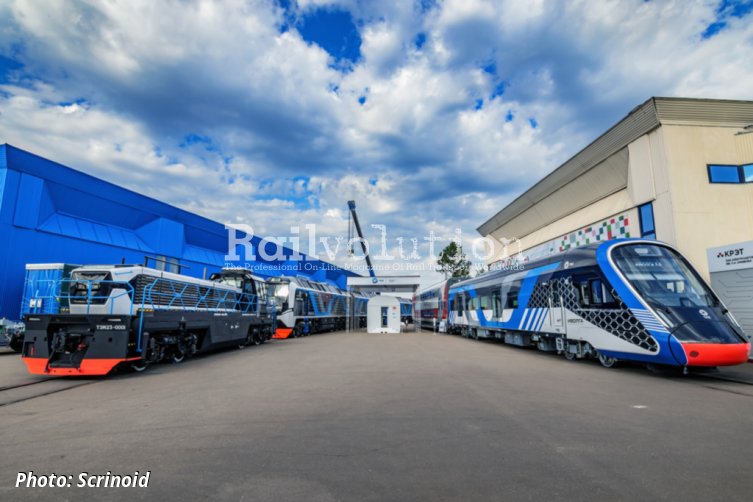 The eighth edition of the „Railway Salon“, originally known as EXPO 1520 and for the second time under the new name Pro//Motion.Expo (Russian: Pro//Dvizhenie.Ekspo), was held at the VNIIZhT Shcherbinka from 26 to 29 August 2021. Its organiser is now the Moscow-based transport publishing house Gudok („siren“ or „whistle“).

With regard to the COVID-19 pandemic, this fair was fortunate to be held in odd years, so it avoided the cancellation of dates that befell, for example, InnoTrans, as in August 2019, the seventh edition was still held under normal circumstances, and this year the coronavirus situation has already made it possible to hold such an event.

Compared to last year's edition, when Pro//Motion.Expo was held from Wednesday to Saturday, this year the date was moved one day into the weekend, i. e. from Thursday to Sunday. This was due to the fact that this year was declared the Year of Railways in Europe, the Year of Science and Technology in Russia and the Year of Ecology in the RZD holding.

Therefore, the individual items of the programme were devoted to these topics, the event was included in the official plan of activities of the Year of Science and Technology, which was established by a decree of the President of the Russian Federation, and to reach out more to the general public, the last two days of the fair ended with a large-scale celebration dedicated to railway transport - the Open Railway Day in the Moscow region. Therefore, the usual cavalcade on the circuit was this time entitled „From History to Innovation“, which meant a span from the „b“ steam locomotive produced in 1897 to the current vehicles, which included runs by the unmanned Lastochka.

Approximately 7,000 people visited the „salon“ during the working days, compared to about 18,000 two years ago (during the technical part, i. e. excluding the follow-up presentations for the general public). This year's numbers of vehicles exhbited were far from the previous year's number of about 90 vehicles on the outdoor areas and during the cavalcades, which was evident from the empty areas at the back of the fair.

This year there were 154 exhibitors present, compared to 212 in 2019. For this year, the organisers listed 25 participating countries. During the fair and conference 13 cooperation agreements were signed with a total value of approximately 50 billion RUB (around 600 million EUR). The conference, which included 25 roundtables, discussions and meetings, was attended by more than 1,000 experts and covered a wide range of topics from transport construction and sustainable development technologies to economics, digitalisation (which was already a mainstay of the 2019 edition), including the introduction of unmanned rail vehicles.

Caption to the photo: The „heart“ of the Pro//Motion.Expo is this space adjacent to the VNIIZhT conference centre (right). This year, once again, it was dominated by the TMH production, which was represented by a total of nine vehicles, the largest number of all exhibitors. The locomotive TEM23-001 is on the left, followed by 3TE25K2M-0086. On the right is a car from the Ivolga 3.0 Class EGE2Tv prototype EMU. In the background, a Model 61-4523 double-deck car, a new version with extended bodyshell space in the upper deck, is visible.

In the centre between the tracks is a mock-up of the car in an enlarged „T“ loading gauge and with a capsule interior. Currently, TVZ is preparing for batch production of „T“ cars from 2023, of which FPK has so far ordered the development of the following types: „platskartny“ cars, compartment cars and „shtabnoy“ compartment cars with a new interior design with a children's corner and a larger luggage compartment.