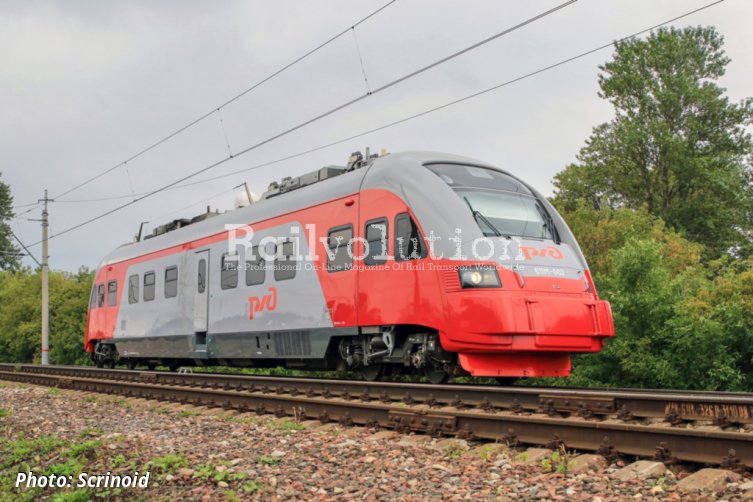 Also present on the Shcherbinka test circuit was one of the two Class 611M inspection diesel railcars, the fruit of the contract signed in October 2011 between RZD and PESA. This was PESA’s first-ever success in winning a contract in Russia for a new train, and in October 2012 RZD ordered a second railcar.

The railcar has an observation saloon, a conference room, a WC cubicle, kitchen, office and a utility compartment. Although it is designated Class 611M, being a successor to the Class 610M inspection railcars built for UZ (one of which was exhibited at InnoTrans 2004), this latest vehicle incorporates as many as possible of the construction elements which feature on PESA’s LINK DMUs. Each bogie is powered by a PowerPack comprising a 390 kW MTU diesel and Voith hydromechanical transmission. Maximum speed is 180 km/h.

The 611M is designed for operation in an ambient temperature range of -40 to +40 °C. PESA independently sourced and installed all of the infrastructure inspection and measurement systems. Both ends of the railcar are fitted with impact absorbing crumple zones, this passive safety system designed to protect staff and passengers in the event of collisions.

611M-001 was outshopped at Bydgoszcz in late June 2013, and ran its first dynamic tests, mounted on 1,435 mm gauge bogies, between Bydgoszcz and Inowrocław, during the first half of July 2013. The railcar was moved to Russia in second half of the latter month, starting its first test run on the Shcherbinka circuit in late July. Authorisation for operation on the RZD network was awarded in December 2013.

611M-002 was outshopped in early August and left Bydgoszcz for Russia in early September 2013. On 15 October, during a test run on the Moskva - St. Petersburg main line with a group of RZD managers on board, the railcar achieved a top speed of 201 km/h. This was a speed record for a Polish-built diesel-powered train. The 611Ms are allocated to Moskovskaya doroga.