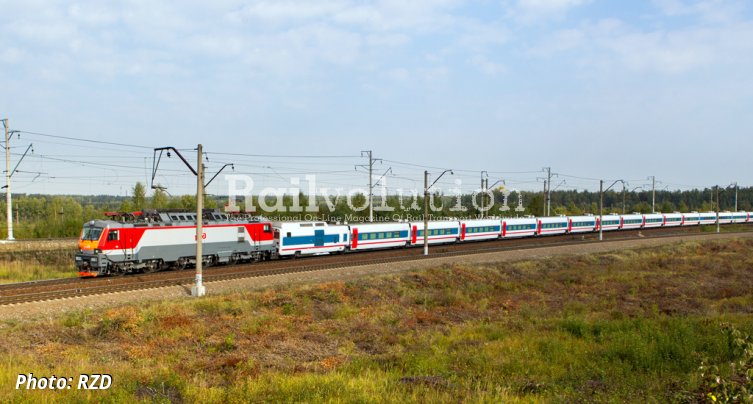 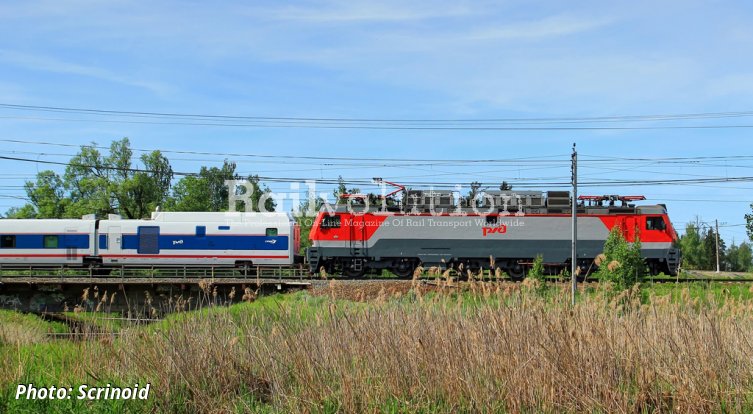 In connection with the deductions at the recent DSB Talgo contract, another questions arise which are related to the Strizh (Swift) trains, and that is their energy-intensive and expensive operation.

On 18 June 2011 during the International Economic Forum in St. Peterburg RZD placed a contract worth over 100 million EUR with Talgo for seven 20-car rakes of Talgo Pendular stock for long distance services. Four of these trains were fixed-gauge and envisaged for Moskva to Kyiv services, and  the remaining three, of variable-gauge design, for Moskva to Berlin services.

The 20-car rakes for the Moskva to Nizhny Novgorod service are designated MK on account of their originally having been ordered for Moskva to Kyiv services. The Moskva to Berlin rakes, designated MB, are formed of 20 cars, and, given the greater length of journey (1,892 km, compared with the 872 km between Moskva and Kyiv and the 440 km between Moskva and Nizhny Novgorod), are not identical to the MK rakes. The designation letters are not Talgo’s standard practice, and were used originally in communications with RZD to easily identify the vehicle types during the ordering and construction stages.

The events in eastern Ukraine, coupled with an apparent lack of interest by the then Ukrainian government, prompted RZD to change its plans in June 2014. It was announced that the fixed-gauge Talgo stock would be used on services linking Moskva and Nizhny Novgorod, instead of to and from Kyiv, replacing the Sapsans, which would be used to strengthen Moskva to St. Petersburg services.

RZD put its four rakes of fixed-gauge Talgo stock into commercial service on 1 June 2015 between Moskva and Nizhny Novgorod, the authorisation being granted in spring 2015, a couple of months later than originally envisaged. Original plans were for a start-up of the service in mid-December 2014.

The first commercial Moskva to Berlin Strizh variable-gauge Talgo service departed from Moskva Kursky vokzal at 13.05 on 17 December 2016 with the reporting number 13, hauled by RZD’s Olimp locomotive EP20-052. Intermediate stops were made at Smolensk, Orsha, Minsk and Brest. Gauge-changing at Brest, a procedure which with fixed-gauge stock involved bogie exchange, was reduced from around two hours to 20 minutes.

All Strizhes  run only on electrified lines. However, an essential component in RZD’s Talgo stock are generator cars, since there is no converter provided to transform the voltage supplied by the locomotive into that required for on-board uses such as heating and lighting. Similar generator cars could be found in Spain with rakes of Talgo III, IV, V and VI stock, but were eliminated from production runs of Talgo 7 stock destined for locomotive-hauled services. One handicap is that the generator cars increase the weight of the train, and also require diesel fuel for operation, this increasing operating costs.

In each Strizh rake there are two generator cars, one at each end of the train. Each diesel genset has an output of 500 kVA at 1,500 rpm, which means 1,000 kVA per rake. Both diesel gensets operate continuously, regardless of whether the train is stationary or running, whether it is under the overhead wire or not. In addition to the permanent noise and exhaust emissions, the energy consumption of these generator cars requires at least a simplified calculation.

According to the manufacturer, the four diesel fuel tanks in each generator car have a total fuel capacity of 2,556 litres, i.e. 5,112 litres in total, sufficient for 28.7 hours of normal Strizh operation. On average, it means the consumption of about 182 litres of diesel fuel per 1 hour of operation, or 4,368 litres per 24 hours per Strizh rake. With seven trains, this is 30,576 litres daily and a total of 11,160,240 liters per year.

Assume that not all rakes run 365 days a year, so we can round this number down to 10 million litres of diesel fuel annually for the entire Strizh fleet. With the price of diesel fuel for RZD, say 0.4 EUR/litre, this means 4 million EUR a year just for fuel! For the last five years it is roughly 20 million EUR.

To this must be added the additional costs associated with the maintenance of generator cars, their weight, etc. However, even if it is only an indicative calculation, which is understandably influenced by oil prices, economic and other social factors, it is still astonishing how (unnecessarily) large sums of money are spent for operation of the Strizh rakes with the generator cars used on electrified lines... Even more compared with the cost of electricity which could be supplied from the electric locomotive.

The lower Talgo cars do not even offer lower aerodynamic drag. The cars at either end of the Talgo trains have dimensions complying with the prevailing loading gauge, and have a frontal surface area of around 10 m2. What is even more absurd is the sight of a huge Russian, Kazakh or American locomotive (pointless from the aspect of aerodynamic drag), with a frontal surface area of up to 15 m2, heading a rake of Talgo stock.

We sent this calculation to RZD asking the operator, why it did not equip its Talgo rakes for power supply from electric locomotives and how this phenomenon coincides with RZD's struggle to reduce emissions.

We received the following statement: „An opinion on higher efficiency with the supply of electric energy from a central energy source in the locomotive on electrified lines is, of course, undeniable. At the same time, however, one of the significant advantages of the currently used concept is lost - the autonomous operation of the Talgo rakes necessary to comply with passenger comfort requirements when running on non-electrified lines and when being manouevred by diesel shunters, as well as during Strizh standstill in case of a power supply failure.

However, the level of noise and vibrations of generator cars, although higher than that of the central power supply static converter in locomotive, does not exceed the standards valid for railway transport due to design measures. In the case of generator car machinists, a change in the type of electrical power source for Strizh rakes shall not provide for the possibility of canceling this working position, and the time required to monitor the operation of diesel gensets shall not exceed 20 % of the machinist's working time.“

Subsequently, we sent the following questions to RZD:
1) The factor of passenger comfort is clear. However, how is the latter ensured for other RZD long distance trains that do not have generator cars and are operated on electrified lines? Hundreds of long distance trains run on the RZD network daily and there is not worry as it is with only SEVEN Strizh rakes?
2) So why aren't machinists necessary in other long distance RZD services? How these differ from Talgo trains?
3) What do the Strizh machinists during the remaining 80 % of their working time?

Despite our reminders, we have not received any answers to these questions from RZD. Which is basically not surprising, because some rational and acceptable answer in this case is de facto not possible...

We also asked Talgo for its opinion. We are waiting for its answer.