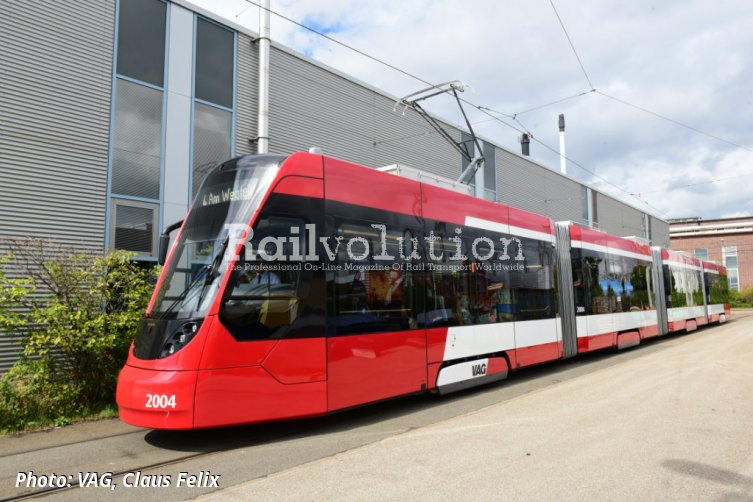 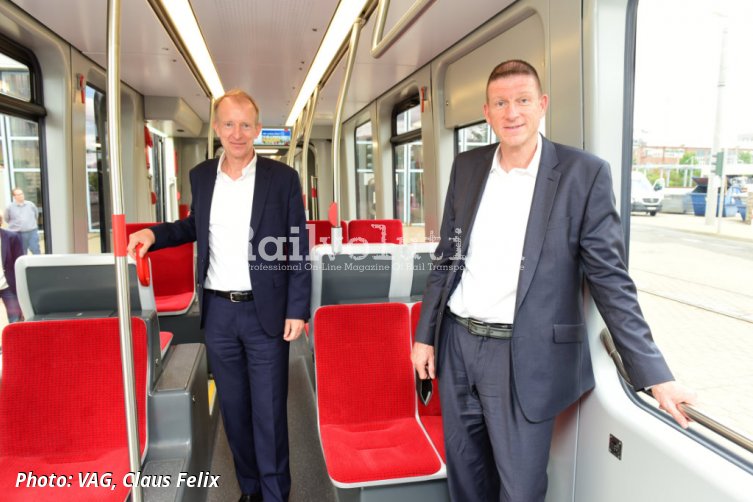 On 8 September 2022, VAG Verkehrs-Aktiengesellschaft and Siemens Mobility presented the Avenio tram. In the next few months, VAG will put 26 Avenios into service. Four new trams are already in Nürnberg and can be seen regularly on commissioning and driver’s training runs in the city. The first vehicle is scheduled to start passenger services before Christmas.

Tim Dahlmann-Resing, VAG board member for technology and marketing, explains: "Our new trams are an important building block for the transport change in Nürnberg. As early as next year, we will put tram lines 10 Dutzendteich - Plärrer - Am Wegfeld and 11 Gibitzenhof - Hauptbahnhof - Mögeldorf into service on existing tracks. In this way, we will create new and fast direct service and also offer at least a five-minute frequency on sections that are in high demand. We need part of the new fleet for this.

But there are also plans to extend network by building new lines, for which more trams are needed. The goal is for public transport in Nürnberg  to carry around 200 million passengers per year by 2030. This corresponds to an increase of 30 % compared to 2019. Despite the slump in passenger numbers during the Corona pandemic, VAG is sticking to this goal."

Under the motto "From the region for the region", the project management and engineering come from Siemens Erlangen and the propulsion and control technology from Siemens Nürnberg. Propulsion components would be put through their paces in the modern Siemens motor test centre in Nürnberg's Südstadt. The Avenio is built at the Siemens plant in Kragujevac, Serbia.

The first two Avenios were sent to the PCW at the end of November 2021 and the beginning of February 2022 respectively. Here they completed many test runs that are necessary for the approval and commissioning, such as dynamic tests and double traction tests. Since spring, the second part of the type tests has been taking place in Nürnberg. The process should be completed before Christmas. Other trams in the batch will only have to undergo routine tests, which are, however, also extensive in order to guarantee the quality and safety of each vehicle.

The first Avenios have been running on the VAG network at night since the end of June 2022 and during the day since July. The spectrum of work ranges from clearance checks and acoustic measurements to repeated brake tests. The VAG driving school is currently training the drivers on the vehicles.

VAG is rebuilding the tram depot in Heinrich-Alfes-Strasse in the south  of the city at a cost of around 24 million EUR. When building this workshop in the early 2000s, VAG assumed the largely existing network with a few extensions. For this reason and for cost reasons, the works and storage hall were built in 2002/03 for 52 vehicles. With the current procurement of Avenios, in around a year at least 26 more vehicles will have to be serviced in addition to the current 48 trams.

Depending on the expansion of the network and the resulting increase in vehicle demand, VAG will need up to six more workstations in the workshop alone in the coming decades. On the one hand for the ongoing maintenance and servicing of the vehicles, on the other hand for major deadline work or also for repair work after accidents. VAG would like to continue doing all this work at a central location, as this is the most economical solution in every respect.