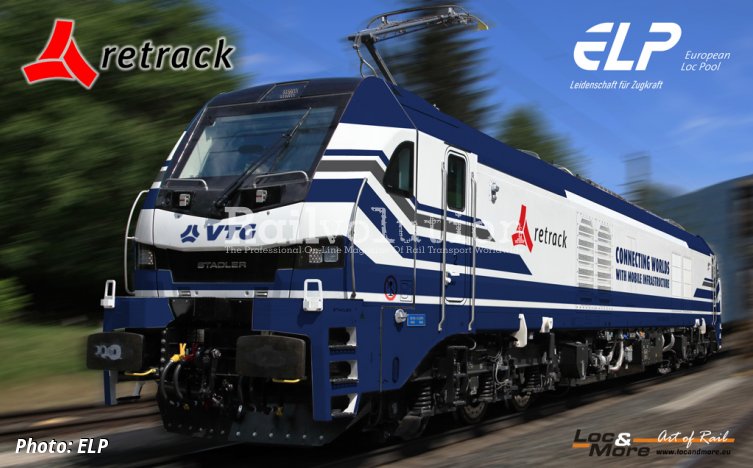 On 12 October 2020 VTG Rail Logistics Deutschland and European Loc Pool (ELP) have announced signature of a long-term full-service leasing contract for up to four EURODUAL locomotives. They will be used on selected strategic corridors served by Retrack, rail operating subsidiary of VTG Rail Logistics Deutschland. First of them will be delivered in the first quarter of 2021.

According to Retrack, the new locomotives can haul to 30 % more tonnage than the existing electric and diesel locomotives that are in use on its main corridors. In addition, the ability to operate heavy freight trains independently over non-electrified lines and in the shunting areas (first and last miles) is becoming increasingly important for Retrack customers. Furthermore Retrack states that it plans to use the locomotives for haulage of freight trains of length extended up to 740 m, however this is still a plan in the long run.

ELP meanwhile increased number of EURODUALs ordered from Stadler. The initial first orders included 30 locomotives, 28 of them in the version for operation in Germany and Austria, and remaining two for operation in Sweden and Norway. However recently ELP ordered ten more locomotives resulting in 38 (DE/AT) + 2 (SE/NO) EURODUALs having on order now. Out of these ELP has so far closed full-service lease-agreements for 30 (DE/AT) + 2 (SE/NO) EURODUALs with over 10 different customers and more leasing contracts are expected to be sealed before the end of November.

So far, eight locomotives were delivered to their lessees in Germany March and April 2020, as we reported here. The two locomotives fitted for operation in Sweden and Norway are to be handed over to Green Cargo by the end of October 2020, following their homologation to be obtained at least. Subsequent deliveries for all the other locomotives ordered so far, ie. 30 EURODUALs, are scheduled to take place between late November 2020 and late October 2021.

Deliveries of a batch of ten EURO9000 locomotives are scheduled to start by the fourth quarter 2022.