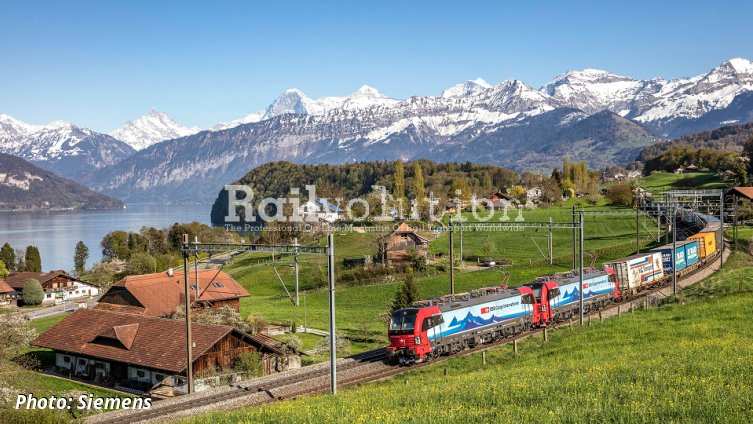 At the end of June 2022, Siemens Mobility announced that SBB Cargo International in cooperation with SüdLeasing has ordered 20 Vectron multisystem locomotives equipped with the new XLoad package. SBB CINT will lease them from SüdLeasing under a long-term rental plan with a flexible term. The contract also includes maintenance of these 160 km/h locomotives by the manufacturer.

Vectron XLoad is an equipment package developed to improve adhesion and traction performance and increase trailing loads. With XLoad option, for example, operators on the North-South Corridor will be able to use only one rather than two four-axle locomotives for a train. The Vectrons will be delivered beginning in 2024.

Albrecht Neumann, CEO Rolling Stock at Siemens Mobility, said: “We are pleased about the further expansion of SBB Cargo International’s Vectron fleet and thank the company for their trust in us and in our locomotives. With this order, the number of Vectrons sold to Swiss customers has increased to over 100. Thanks to XLoad, the locomotives achieve tractive power previously not possible with four-axle locomotives.“

These locomotives will join the existing fleet of 38 Vectrons at SBB CINT, also on long-term lease, of which:
- 18 were delivered in 2017 - 18 and financed by the Swiss bank Reichmuth & Co Privatbankiers, Luzern (founded in 1996). These machines are 193 461 - 478, which are generally called "red" and are equipped for DACHI operations,
- 20 were delivered in 2019 - 20 and financed by the aforementioned German leasing company SüdLeasing (founded in 1970). The machines are 193 516 - 535, which are generally referred to as "blue", have the equipment for DACHINL operation, and were the first ones for which Siemens used virtual vehicle handover for covid reason. The latter order included an option for an additional 20 locomotives, which was used by the newest contract.

SBB CINT will also use these new 6,400 kW Vectrons with a maximum operating speed of 160 km/h in transalpine transport, specifically between Italy and the ARA (Amsterdam, Rotterdam, Antwerp) ports. They will be approved for operation in Belgium, Germany, Austria, Switzerland, Italy and the Netherlands (BDACHINL), so that in addition to the on-board ETCS Baseline 3, they will be equipped with the relevant national ATPs.

We asked Siemens:
- what technical or software means have been used to improve adhesion and traction performance of the XLoad Vectrons?
- if the starting traction force was previously 300 kN, now is it 350 kN? Has the traction power of 6,400 kW been maintained?
- If, as Albrecht Neumann says: "Thanks to XLoad, the locomotives achieve tractive power previously not possible with four-axle locomotives", what is now the maximum weight of trains that the Vectron XLoad can haul? What is the maximum weight of trains with Vectron without XLoad?

We have not been able to obtain details of this solution from Siemens for the whole of July, but SBB CINT has at least clarified that the Vectron XLoad will have its maximum tractive effort increased from 300 kN to 350 kN (i. e. in line with the manufacturer's intention announced in 2019) and that the specific loads are yet to be specified.

Primarily developed for the demanding mountain tracks in the Alpine countries, the XLoad system is intended to enable trains to be carried up to 20 % heavier than before, or to allow only one Vectron to be used instead of two, or for one Vectron XLoad to replace a six-axle Class Re 620 locomotive. To give an idea, the trailing loads for all existing SBB CINT’s Class 193 Vectrons and Class 189 and Re 474  Eurosprinters are as follows:
2,478 t on 6 ‰ gradient,
1,340 t on 12 ‰ gradient,
675 t on 26 ‰ gradient.

This is the first contract for the Vectron XLoad version, which includes optimised traction control on the adhesion limit (improved slip protection) and new hardware components for optimum traction force transfer between wheel and rail. Until now, Siemens Mobility has sold more than 1,400 Vectron locomotives to 62 customers.