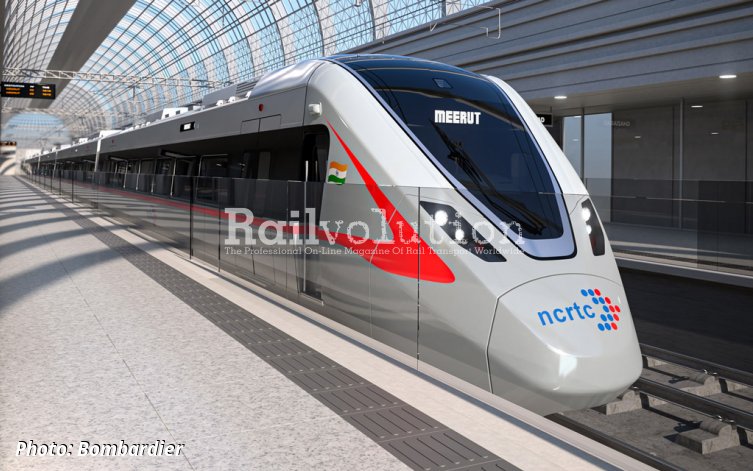 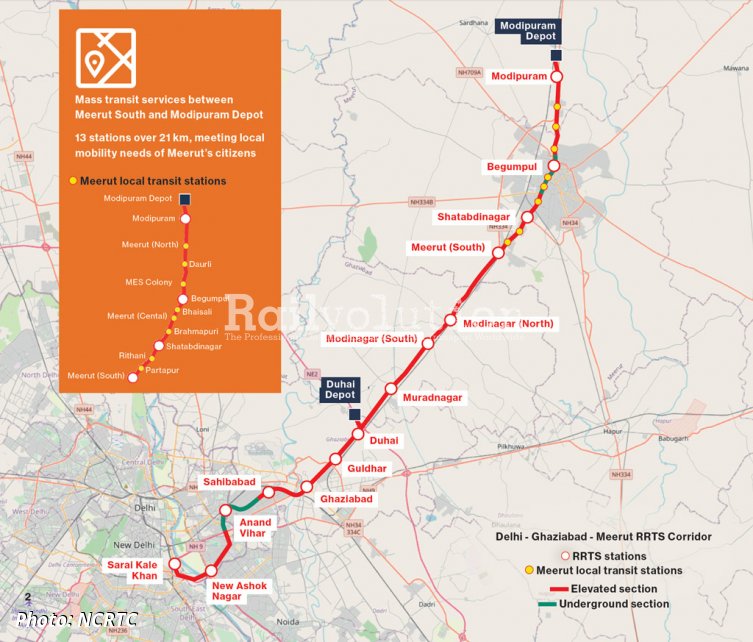 The contract for 40 EMUs includes 30 six-car trains for RRTS and 10 three-car trains for local transit services in Meerut, in total 210 cars. NCRTC has a provision to exercise an option to procure additional 90 cars and a further two years of maintenance. "These energy-efficient trains will contribute towards making India’s first RRTS futuristic and sustainable. Clubbed with state-of-the-art commuter centric features, RRTS is going to transform the way people travel in National Capital Region and set a new benchmark for similar projects in the future," said Vinay Kumar Singh, NCRTC Managing Director.

The 180 km/h 25 kV trains with stainless steel bodyshells are designed in accordance with EN 15227 C-II crash standards and with EN 45545 fire protection standards. They will use the FLEXX bogies and the MITRAC propulsion system. The traction and auxiliary converters are using the latest IGBT technology. The three-car units will accommodate around 900 passengers and the six-car ones up to 1,790 passengers. The RRTS trains can be expanded to nine-car trainsets.

We asked Bombardier for the technical data of the new EMUs (axle arrangements, traction power, brake power, dimensions, weights, etc.). We are waiting for an answer.

The RRTS train design, developed in collaboration with NCRTC’s team, will offer a host of safety, security and environmental benefits while keeping passenger comfort at the forefront. The semi-high-speed aerodynamic trainsets will have a 2 + 2 transverse seating arrangement with standing spaces and automatic plug-in type sliding doors. The air-conditioned trains will also provide space for luggage, CCTV cameras for enhanced security and offer the choice of business class seating as well as a car designated for women in the six-car trainsets for regional services.

Bombardier will design, build and maintain the RRTS trains in accordance with the Make in India guidelines. Savli works will produce the bogies and bodyshells as well as undertake final assembly and testing of the trains. Maneja works will manufacture the propulsion systems and electric equipment. The TCMS will be delivered from Vadodara centre, and the rolling stock is being designed at the Global Engineering and Technology Centre in Hyderabad. Local teams will provide maintenance services for RRTS trainsets.

The 82 km Delhi - Ghaziabad - Meerut RRTS will enable a 180 km/h speed, one of the fastest in India and it will have 24 stations. The trains will reduce travel time from Meerut to Delhi to less than 60 minutes and expected ridership is around 800,000 passengers daily. Local transit services between Meerut South and Modipuram Depot Station with 13 stations over 21 km on the RRTS infrastructure will provide local mobility services for Meerut’s citizens and deliver efficient regional connectivity. RRTS is India’s first project to include maintenance services as part of the rolling stock tender process and Bombardier local teams will provide maintenance services for a period of 15 years through two maintenance depots established by NCRTC in Duhai and Modipuram.

The National Capital Region Transport Corporation is a joint venture of the Government of India and the State Governments of NCT Delhi, Haryana, Rajasthan and Uttar Pradesh. NCRTC has the mandate to implement the RRTS across the National Capital Region. In its first phase, it will build a 383-km long network of high-frequency commuter rail lines to connect Delhi with cities and urban centres in adjoining states to support balanced and sustainable urban development through better connectivity and access.

On 8 March 2019, the Hon’ble Prime Minister of India laid the Foundation Stone of India’s first Regional Rapid Transit System between Delhi, Ghaziabad and Meerut. The construction work on the corridor is in full swing. The 17 km priority section of the corridor is targeted to be commissioned by 2023 and the entire 82 km corridor will be opened for public by 2025.

The RRTS trains will reduce travel time, enabling passengers from Meerut to reach Delhi in less than 60 minutes. Daily ridership is expected to be around 800,000 passengers. In addition to Delhi - Ghaziabad - Meerut services, under RRTS Phase-1, NCRTC would also offer world class regional commuter transit services on the Delhi - Gurugram - SNB - Alwar (198 km) and Delhi - Panipat (103 km) corridors in future.

Interoperability and multimodal integration are at the core of the RRTS project. All the three prioritised corridors of RRTS, converging at Sarai Kale Khan RRTS station, will be interoperable, helping commuters travel from one corridor to another without changing the train. RRTS stations will be seamlessly integrated with metro stations, railway stations, bus terminals, and airports. RRTS network will be integrated with all lines of the Delhi Metro. While RRTS will act as a backbone for regional transportation, Delhi Metro lines will complement by providing feeder & dispersal services.