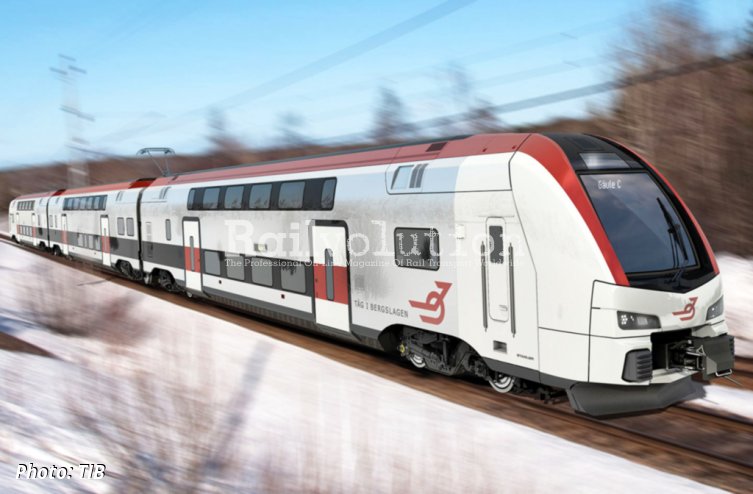 Tåg i Bergslagen (TiB) of Sweden announced that it had chosen Stadler to deliver 6 + 1 four-car DOSTO EMUs. TiB is owned by four regions (Dalarna, Gävleborg, Västmanlands län and Örebro län), and the last one to take decision to purchase the new 200 km/h double-deck trains was Region Gävleborg on 16 December. Now only formalities remain to be solved before the contract signing, one of those being to approve the financing of the seven DOSTO (KISS) EMUs, which is expected to be completed in mid-February 2021.

The TiB Class ER1 EMUs will be of the same version like those four-car DOSTOs, ER1-001 to 033, used by Mälab (Mälardalstrafik). They will form part of a batch, which was ordered from Stadler by Stockholm-based rail vehicle lessor AB Transitio in April 2016 and which included 33 DOSTOs with an option, valid for seven years, for 110 more trains (with a possibility to order also the single-deck FLIRT EMUs).

In the 2016 frame contract Tåg i Bergslagen has had incorporated an option to buy DOSTO trains. The 2020 purchase of TiB’s new Class ER1 EMUs was organised by Transitio (which also owns 28 other trains of TiB - see below), but the operator guarantees financing of them. It is envisaged that the optional, seventh unit will be confirmed in the near future.

The first four-car Class ER1 EMU for TiB (the accompanying picture is wrong as it comes from the time when it was planned to acquire the three-car units) is expected to be delivered in 2022, the remainder in 2023. Subsequently five Class X14 EMUs from Östgötatrafik, which were used as a temporary solution, will be replaced. The DOSTOs will be significantly larger than the X14s, offering 333 fixed and 25 tip-up seats.

Tommy Levinsson, TiB Chairman of the Board, said: „Buying six plus one DOSTO means that we expand our fleet with two more units, thus in the long time we can offer more services with more modern vehicles. That the fleet will be unified with that of Mälab is perfect, because it makes it possible to rent trains from each other in the future, plus it is an advantage for their maintenance.“

Construction of the Class ER1 began at the Altenrhein works in early 2018, but on 25 September 2019 Stadler announced that it had moved the first bodyshell from its Altenrhein factory to its new St. Margrethen establishment for completion there. This bodyshell was one of those which formed part of a Class ER1 DOSTO EMU for Mälab.

Until now 32 Dostos for Mälab and eight for Upplands Lokaltrafik have been delivered. There are at present 13 more deliveries to be done, mostly in late 2021 and in early 2022.