Driverless Trams To Be Introduced In Moskva 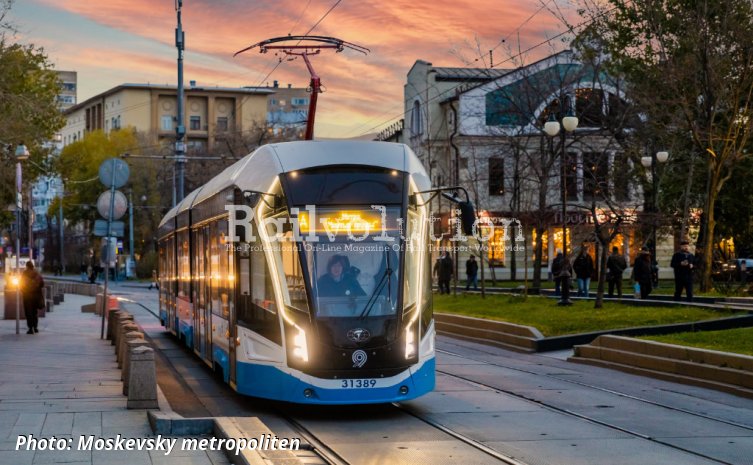 Driverless trams may be launched in testing mode in Moskva in the end of 2022 or in the beginning of 2023, declared Maksim Liksutov, the Deputy Mayor of Moskva for Transport. It outlines that in terms of legislation everything is done to ensure that driverless transport appears as quickly as possible.

As far as driverless transport is concerned, Moskva primarily relies on the rail public transport. Moskva together with Yandex work on the driverless tram project. Yandex is one of the largest IT companies in Russia. It does own the search engine of the same name, but the company's activities are not limited to that. One of its activities is the development of unmanned technologies.

It is planned that the driverless tram will be tested since 2022 - at first, at depots, later at nights on the tram network, and finally - with passengers. 80 % of tram lines are already segregated from other road users. For the driverless trams Model 71-931 Vityaz is used, built by Transportnye sistemy of Moskva. At the moment one tram is being tested, on which special equipment is being installed, and it is expected to operate it drivereless in the first stage in late 2022 or early 2023.

Maksim Liksutov said: „In Moskva metro, the headway of trains during rush hour is 80 - 90 seconds. There is yet no company in Russia that can offer a solution to ensure such headways in driverless mode. We know that developments are underway, and we are very interested in them.“ As soon as such systems are in place, timelines and prospects will be defined." Since February 2021, Moskevsky metropoliten also operates the Moskva tram fleet, the reason being that unified management and the application of strict metro standards will enable increasing tram speed, improving operational services and enhancing the quality of passenger service.

Driverless technologies might be implemented on other types of transport as well: on the MTsK (Moskovskoye tsentralnoye koltso, Moskva Central Circle), RZD plan to reduce headway to 3 minutes or less thanks to automated control technologies in the near future.

Moreover, Sergey Sobyanin, the Mayor of Moscow, decided to support the projects for the development of driverless taxis. The Moskva’s Duma (the legislative body of Moskva) also approved the proposal to introduce an experimental legal regime for testing driverless taxis in the capital. It is envisaged that already in 2022 Yandex driverless taxis will be launched on some routes.