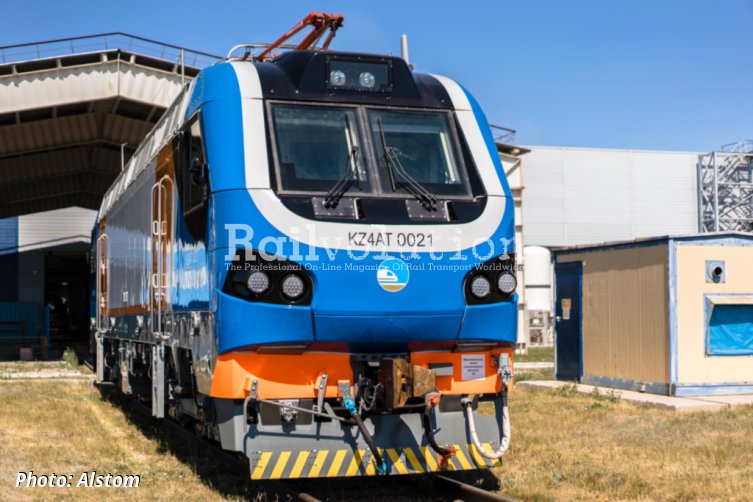 On 21 July 2021, Alstom presented at EKZ works KZ4AT 0021 for KTZ, the first Prima M4 passenger locomotive assembled in Kazakhstan. Following 20 Class KZ4AT locomotives built in Belfort, now their final assembly is carried out in Nur-Sultan (earlier Astana) as a result of an additional technology from Alstom’s European sites.

Guillaume Tritter, Alstom Managing Director for Western & Central Asia, stated: „Today is a very important day, a date to be remembered! We are very honored to present and commission the very first made-in-Kazakhstan passenger electric locomotive. Thanks to our strong partnership with KTZ and our ambitious localisation plan, this tailor-made locomotive will run across the country at speeds up to 200 km/h.“

This enthusiastic managerial statement should, however, be taken somewhat lightly... At first, on the KTZ network there is no possible to run 200 km/h in regular service. At second, the production of Class KZ4AT at EKZ started several years later that initially anticipated...

It is to remember that production of the KZ4ATs started in 2013 at Alstom’s Belfort works, and by June 2016 KZ4AT 0020 had been delivered from there. At that stage the EKZ works was preparing to assemble the KZ4ATs itself, this planned to start in late 2016 with KZ4AT 0021. In 2017 it was planned to deliver seven KZ4ATs to KTZ, but this has been delayed, and the assembly of KZ4ATs by EKZ was anticipated to start in 2018. Neither of these plans came to fruition at the time.

In February 2016 Alstom signed an agreement to become EKZ main shareholder by buying 25 % of the shares from KTZ. This became effective since December 2017, making Alstom majority stakeholder in EKZ with 75 % shares. At present EKZ has around 850 employees. In the same month, the locomotive supply agreement and related maintenance agreements were amended to increase the scope of delivery and maintenance up to 302 Class KZ8A and 119 Class KZ4AT locomotives.

Simultaneously it was announced: „EKZ plans to finalise the assembly and the certification of Class KZ4AT locomotives in 2020. The delivery plan of EKZ is of 11 Class KZ4AT locomotives and 18 Class KZ8A locomotives for KTZ in 2020.“ Nevertheless, only KZ4AT 0021 was finished in July 2021, and KZ8A-0070 was visible at EKZ final assembly at the same moment (in 2020 only KZ8A-0056 to 0061 have been built there).

We can add that on 29 June 2021 Alstom announced that it commissioned the first seven Class AZ8A freight locomotives for ADY. They are to be used on the Azerbaijan east-west main line, which links the Caspian Sea main ports and the Georgian border and which has recently been converted from 3 kV DC to 25 kV AC.