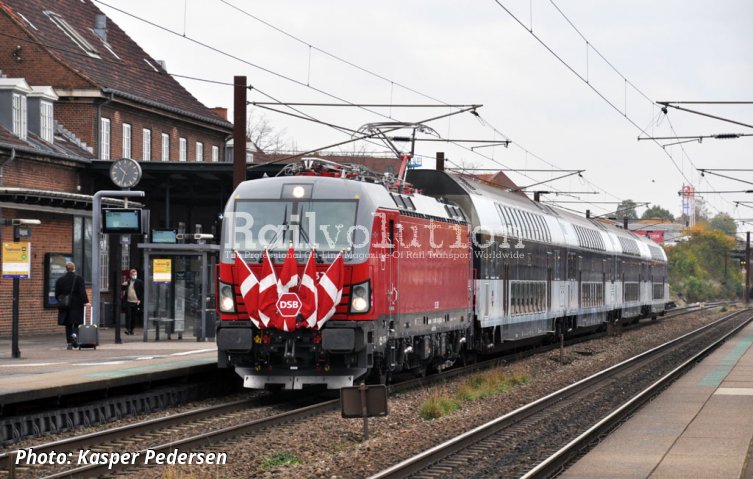 On 26 October 2020, EB 3203 started regular service as the very first of the DSB Vectrons, hauling train RØ 4335 from Copenhagen to Slagelse on the line towards Funen and Jutland. The new Vectron is used on one of the two diagrams previously hauled by a Class EA locomotive. In mid-September the first three Vectrons arrived in Copenhagen, however until now only one of them is in regular service, since DSB has to made some final test and the driver’s training is still on progress.

According to plan, the start of batch deliveries of remaining 39 locomotives is envisaged for January 2021. It is enough, because DSB is short of driving trailers for its double-deck push-pull rakes. Once they will be released when Sydbanen is closed south of Orehoved from 29 April 2021 due to Banedanmark's work on the line (to build the new double-track line down to the upcoming Fehmarnbelt connection), the number of Vectrons in service can be expanded.

Moreover some important lines are still under electrification and modernisation, and they can not be turned on before the new ATP system (ETCS) is ready. The next line which will open for electric operation is Ringsted - Næstved, whose inauguration is planned from August 2021. Then the number of Vectrons in regular service will be substantially higher.

The Ringsted - Femern line is one of Banedanmark's largest infrastructure projects to date, and the mere fact that the project has a budget of 9.5 billion DKK (around 1.3 billion EUR) and runs over the next many years says something about the size of the project.

Before the almost 120 km long railway is able to deliver the required capacity in the future, the line must undergo an extensive rebuild. Therefore Banedanmark is establishing a new 55 km long extra track between Vordingborg and Rødby, so the line in the future will be double track.

Several existing stations and platforms will be rebuilt. The line will be electrified with a 25 kV 50 Hz, and ETCS will be installed, which will enable to increase the speed to 200 km/h. To make room for catenary and the new track, more than 100 bridges and a large number of roads will have to be rebuilt.