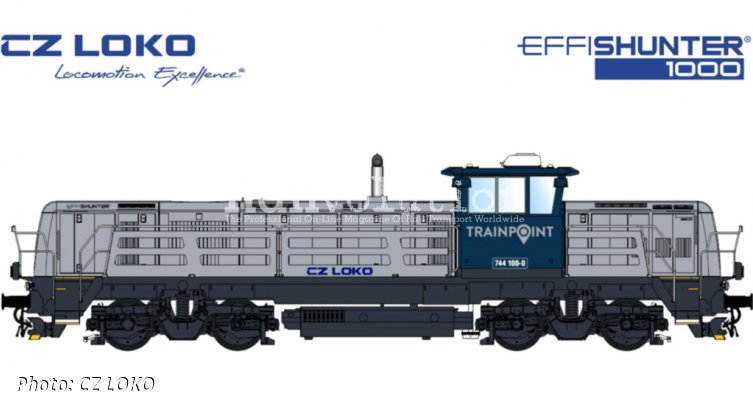 On 24 February 2021, CZ LOKO announced that, following a longer period of negotiations, it had signed in February a contract with Trainpoint Norway for the delivery of one EffiShunter 1000, which is to be delivered this year.

Although it is a Norwegian renting/leasing company based in Oslo (founded in November 2015), the locomotive will first operate in Sweden. Here, until the first half of 2022, a test operation is to take place with the aim of authorisation, which is to be achieved by the end of next year. After that, the authorisation process is to start in Norway as well. The reason is that there is a much bigger market for shunters in Sweden than in Norway, thus Trainpoint Norway prioritised to get the Swedish homologation first and then get the locomotive homologated for Norway.

The company had not signed a contract with an end client for this EffiShunter 1000 yet, but it is expected to follow in the near future. The new locomotive is intended for use in port, terminal and light line operation. Initially it will be located in Göteborg, and will be maintained by NTT (Nordisk Togteknikk) in Sweden, as both NTT and Trainpoint Norway have the same owners (the railway managers Einar Hageskal, Thorsten Priebe and Hans Sørum).

The EffiShunter 1000 for Trainpoint Norway will be equipped with the Swedish ATC national train protection system and the Norwegian ATP-2, as well as the on-board ETCS. For operation in Nordic countries, CZ LOKO will use its experience gained with operation in Finland, where Fenniarail already uses six Type EffiShunter 1600 locomotives, which run beyond the Arctic Circle, where winter temperatures normally fall below -40 °C.

Hans Sørum, Trainpoint Norway Director, adds: “Trainpoint Norway ordered this EffiShunter because it sees a need for modern low-emission and ETCS equipped locomotives on the Scandinavian market. The company appreciates the CZ LOKO product portfolio on account of the fact that (unlike most of the manufacturers in Europe) the Czech builder can deliver the whole range of shunters, from two- to six-axle ones.

Moreover the company has an ongoing production and is able to offer short lead time on delivery. CZ LOKO is also focusing on modular design, this being important for us as we will probably upgrade this locomotive to pure battery power at a later stage. It is also very important for us that CZ LOKO is able to deliver locomotives that can be operated in temperatures down to -40 °C, as this is crucial for operation in the northern part of Scandinavia.

We also appreciate that CZ LOKO has started working on a new generation of ecological locomotives, such as the HybridShunter 400 and DualShunter 2000.” Trainpoint Norway envisages to acquire more EffiShunter 1000s in the future, and it also follows development of the CZ LOKO’s range of „green“ locomotives closely.

Jan Kutálek, CZ LOKO Sales Director, adds: “We see great market potential in Sweden and Norway. We know from the negotiations that there are more than a hundred locomotives, often decades old. Their operation will become more and more demanding not only due to age, but also the absence of ETCS. These locomotives will need to be replaced in the coming years, and we want to be there. And just our next-generation locomotives, which use ‘green’ technology, could also address local operators over time."