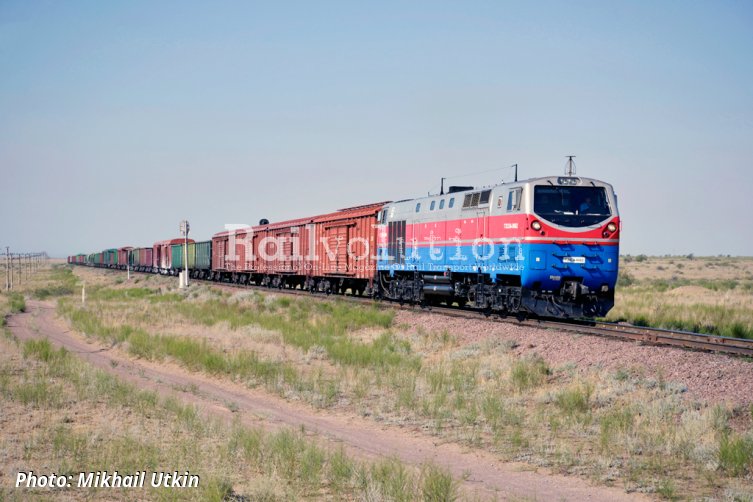 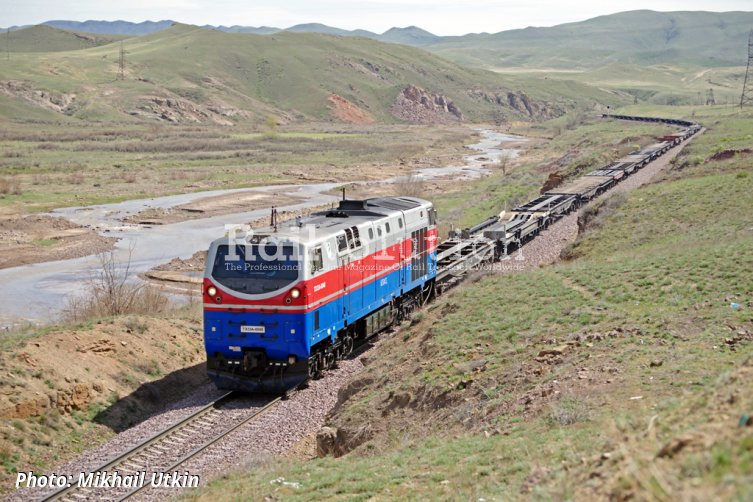 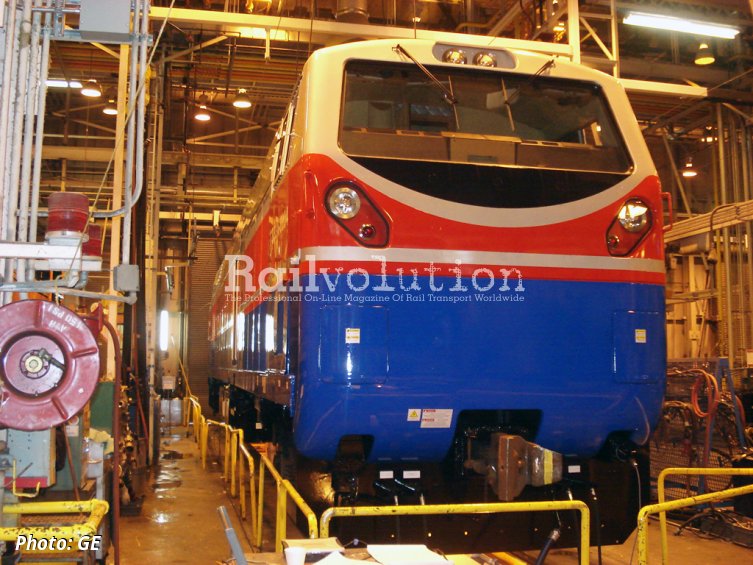 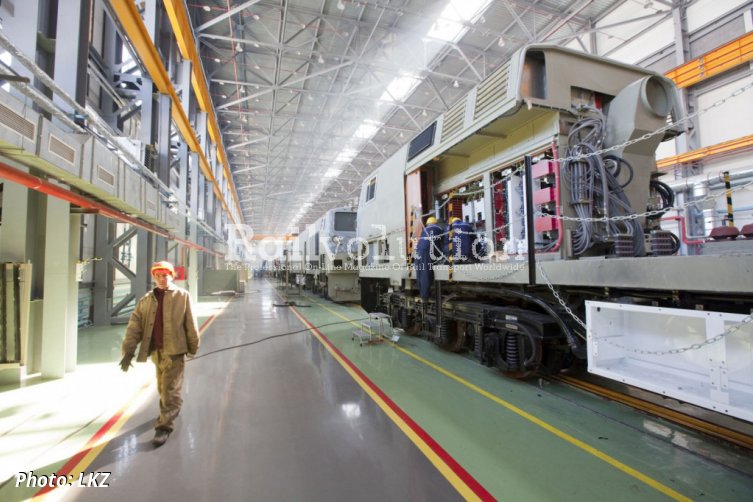 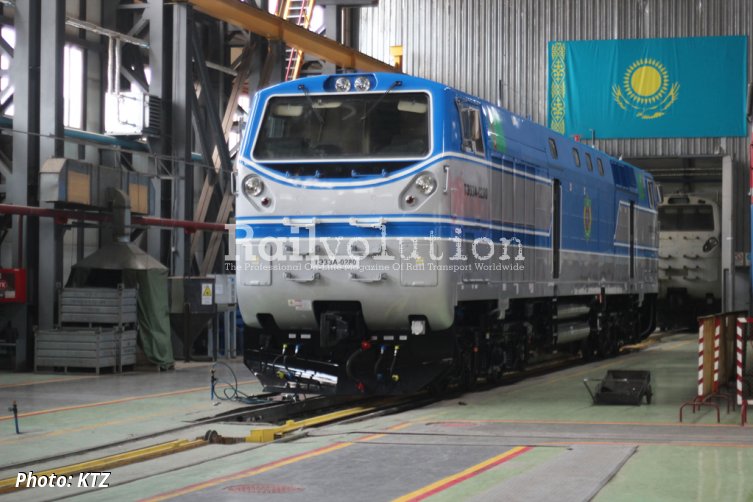 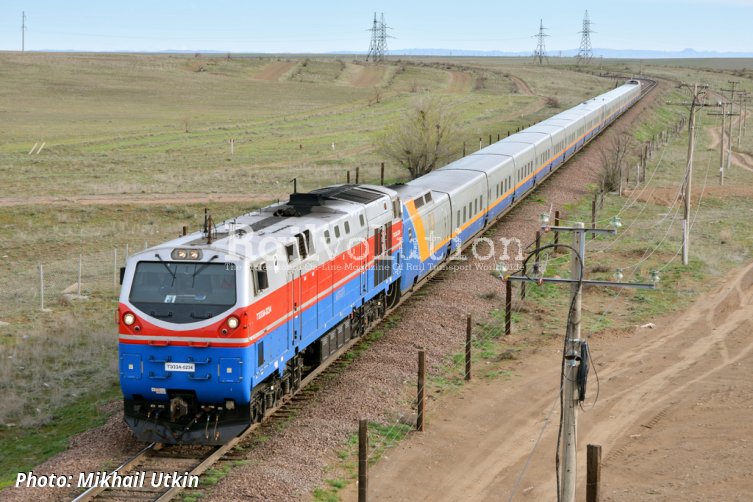 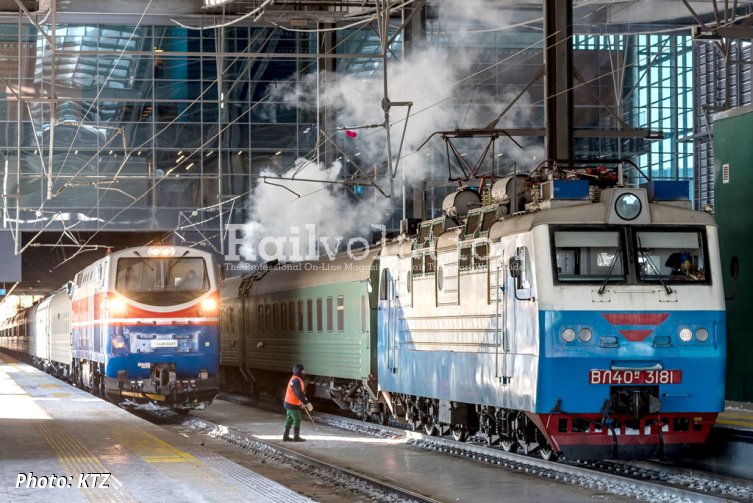 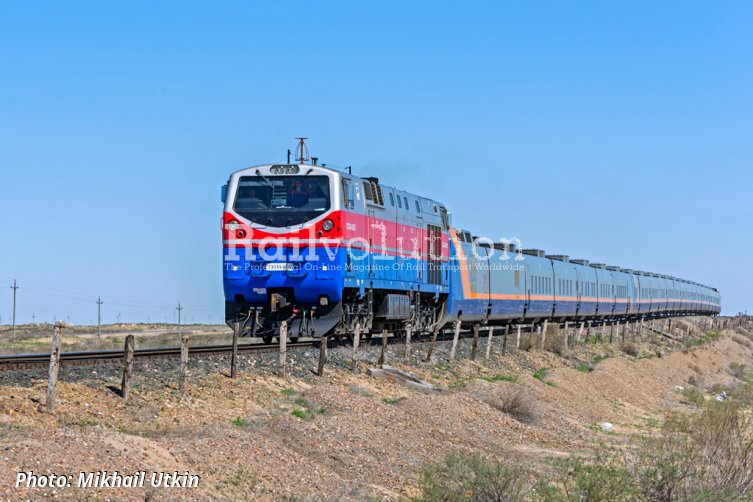 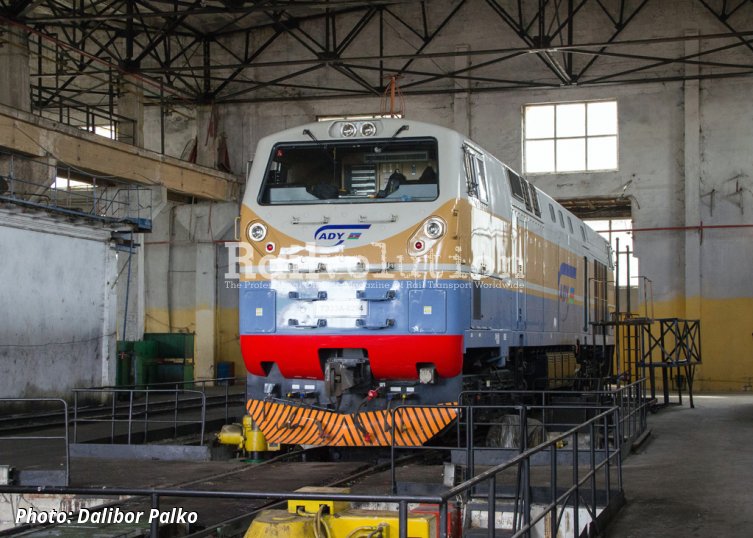 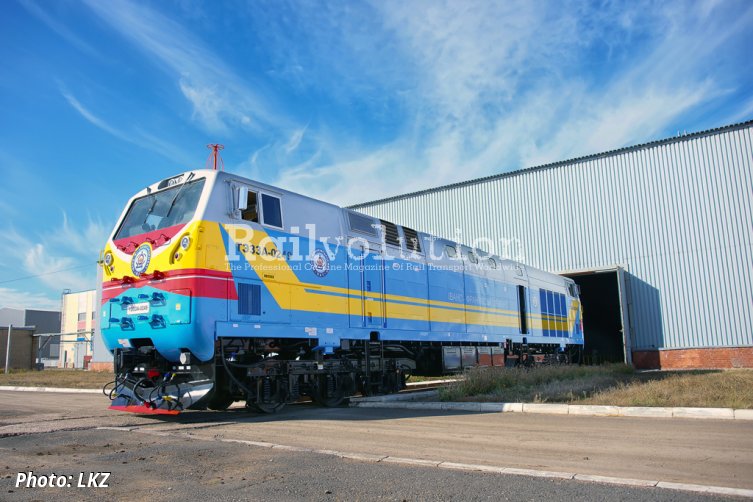 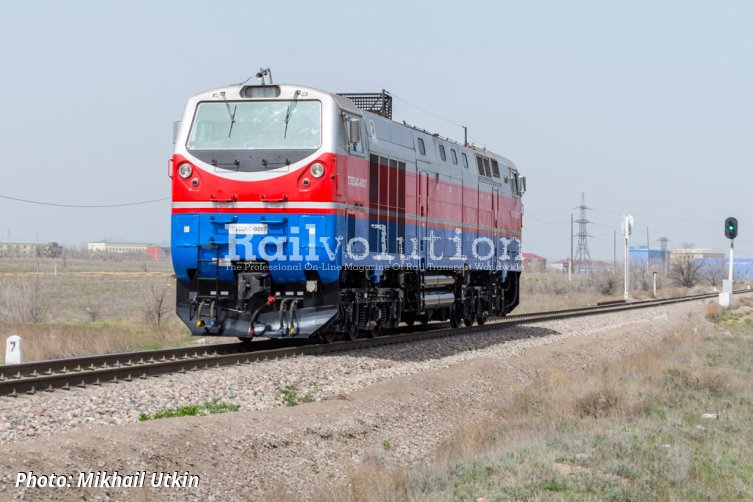 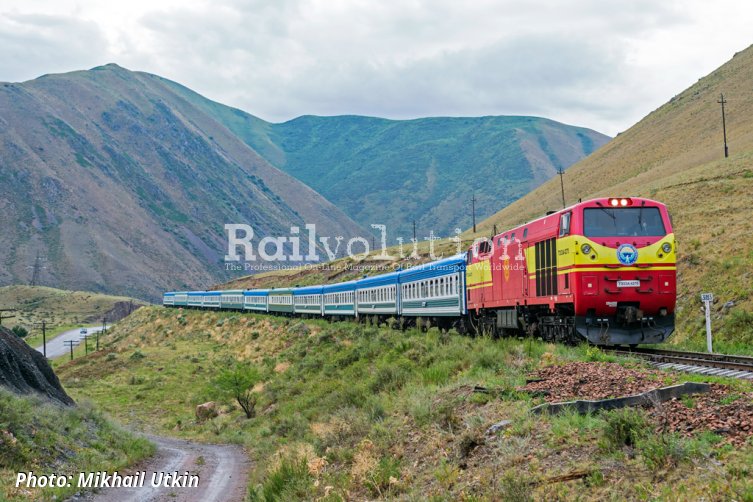 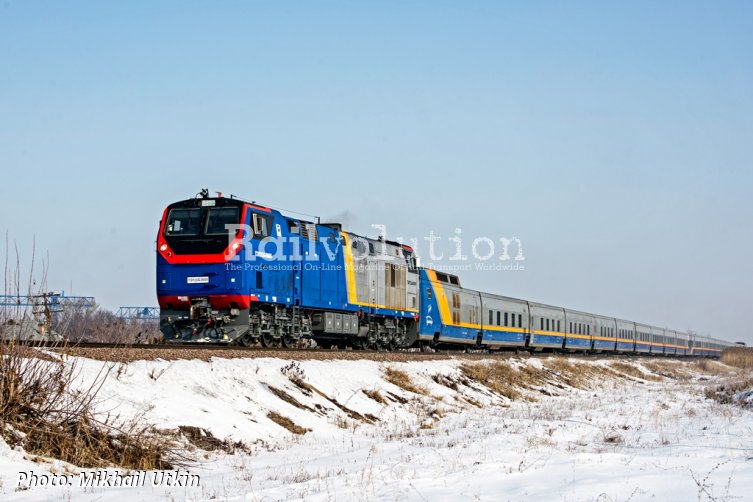 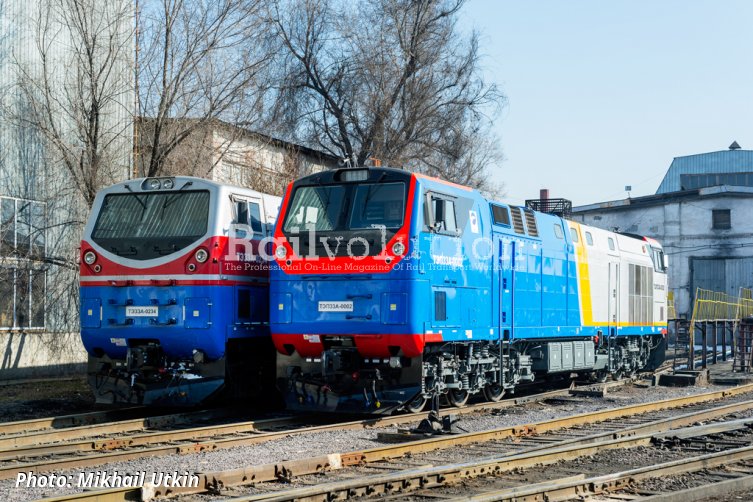 In our article about Prima locomotives we described problems at orders of electric locomotives from EKZ. But similar problems concern also KTZ orders of Tulpar Talgo and LKZ (Lokomotiv Kurastyru Zauyty), both factories based in Nur-Sultan. Of the Evolution diesel locomotives, which are manufactured at the latter site, only part of the initially planned numbers were built so far.

In 2006 a batch of 310 Class TE33A freight Evolutions was ordered by KTZ. According to the contract signed with GE Transportation the first ten locomotives were built in the USA (Erie) and delivered to Kazakhstan in 2009. This created time to build the LKZ facility in Astana, finalise the design and test process for the Class TE33A, and set up the manufacturing process and technology transfer process (Kazakhstan manufacturing personnel were trained in Erie during the building of these ten locomotives).

Then followed TE33A-0012 to 0016, which, despite the original plans, were also built at GE’s Erie works. The reason was that the LKZ facility was being commissioned for the locomotive needs of KTZ longer as initially envisaged.

Taking into account almost 25 export locomotives, KTZ has not received all of its TE33As. Between 2009 and 2015 LKZ has built and delivered 288 Class TE33A locomotives to KTZ. It seems, however, that the current number available is sufficient to cover the operator’s freight traffic needs. Moreover, many of the TE33As have been hauling passenger trains, for quite some time, since they are much more economical than the old Soviet-built diesels.

KTZ also has 11 modified Class TE33AS diesels in its fleet. The „S“ stands for „Sertifikatsionny“, since these machines have been modified and certificated for use in Russia. TE33AS-0001 is the 2013-built prototype. In 2014 LKZ modified ten Class TE33A locomotives as Class TE33AS machines. These had originally been built in 2013 for Estonian operator E.R.S. They were then subjected to RS FZhT approval, and were re-designated TE33AS-0002 to 0011. Although the Class TE33AS locomotives are certified for Russia, they are not used on the international freight trains. Then until 2018 locomotives up to TE33AS-0017 were built for KTZ.

In June 2012 LKZ signed an agreement with General Electric under which 110 Class TEP33A passenger diesels were to be built for KTZ using Evolution Series kits supplied by GE. In the contract it was initially stated that deliveries to KTZ were to start during the first half of 2014. However, in 2014 only two prototypes were built. There was then a delay and batch construction started in summer 2017 by producing the main components for six locomotives, TEP33A-0003 to 0008, and in late October their final assembly started.

They were completed by the end of 2017, LKZ stating that this short time is no problem, since earlier it built up to ten Evolutions per month. Although all deliveries of 110 Class TEP33A passenger locomotives were then expected to be finished in 2019 (instead of in 2018 as envisaged originally), until now only Evolutions up to TEP33A-0017 were built.

Meantime, in December 2016 LKZ signed a new, long term agreement with KTZ under which, in the period up to 2026, the number of Class TEP33A locomotives delivered was envisaged to increase from 110 to 175, and 137 more Class TE33A freight locomotives were expected to be built, making a grand total of 425, resulting in KTZ having a fleet of exactly 600 Evolutions.

However, construction of both classes is not advancing at the moment. On 26 December 2016 an agreement was signed between KTZ and GE involving the acquisition by GE of a 50 % stake in LKZ, which had been founded in 2009 as a 50/50 joint venture between KTZ and TMH. On 12 April 2017 GE announced it has completed the purchase of 50 % of the business interest from KTZ.