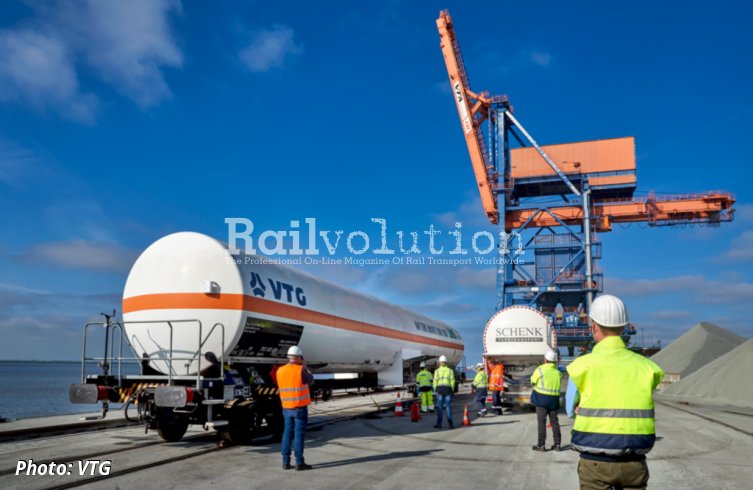 On behalf of LIQVIS GmbH, a Uniper SE subsidiary, VTG AG has successfully completed initial tests involving the transportation by rail of cryogenically liquefied natural gas in specially developed tank wagons. Chart Ferox of Děčín (the Czech Republic) provided technical support for filling on the premises of Brunsbüttel Ports GmbH before the gas was carried by rail to a Uniper power plant roughly 800 km away in Ingolstadt.

LIQVIS is using the project to investigate the option of using rail as a safe, cost-effective and ecologically sound way to transport LNG - a valuable alternative fuel - to putative distribution centers. The ability to move larger volumes in a single batch by rail reduces transport emissions while taking heavy traffic off the roads. Carrying hazardous substances by rail is also generally regarded as very safe. VTG has been carrying LNG for many years.

Now, as the first and - to date - only company in the rail freight sector, it has collaborated with Chart Ferox to develop an innovative tank wagon that can bypass shipping routes, road haulage and the pipeline network to transport LNG across Europe. The brand-new wagons boast a thermally insulated tank to keep the gas at a constant temperature during filling and transportation.

“VTG already has the expertise and the logistical concepts that are needed to move LNG around Europe’s rail networks quickly, reliably and in a way that is kind to the environment,” says Heinz Jürgen Hiller, Business Development LNG Europe. “As a kind of ‘pipeline to go’, our LNG tank wagons can permanently supply liquefied natural gas to whole industries with a voracious appetite for energy. Within the framework of this test project, VTG is joining us in exploring potential to optimize the delivery of LNG to our network of filling stations.”

Brunsbüttel Ports, whose port facility stands at the mouth of the Elbe River, was chosen as the venue for loading: the same site had already handled the first-time filling of VTG’s specially developed tank wagon with LNG back in April 2016. “In recent years, a strategically favorable location at the point where the Elbe flows into the Kiel Canal has combined with close proximity to the port of Hamburg and direct access to the Baltic and Scandinavian markets to establish the Elbe port in Brunsbüttel as one of the leading LNG terminals on Germany’s North Sea coast,” says Frank Schnabel, Managing Director of Brunsbüttel Ports GmbH/the SCHRAMM Group.

Both truck-to-ship and ship-to-ship LNG bunkering are business as usual in Brunsbüttel, and plans for an LNG import and distribution terminal are proceeding apace. LNG could then be redistributed from Brunsbüttel by rail (in cooperation with VTG), by LNG bunker vessel or via the pipeline network.