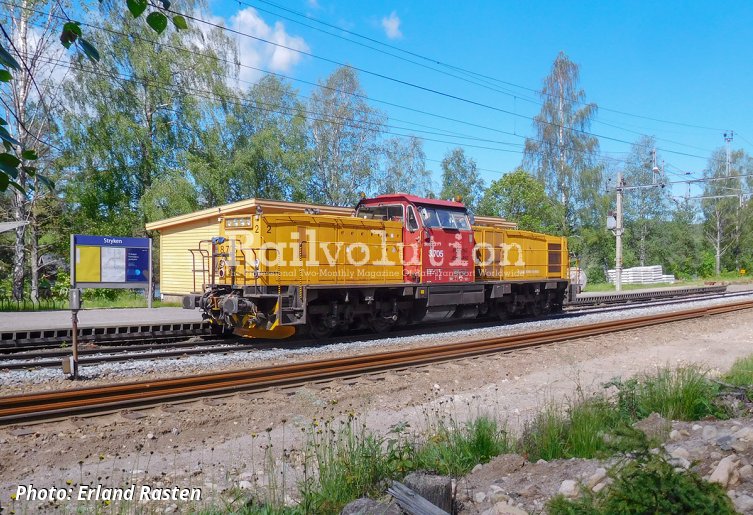 In 2018 the Norwegian rail infrastructure manager, Bane NOR, started a project for the complete digitalisation of signalling and interlocking on the whole of the 4,200 km rail network in Norway, which is scheduled to be fully equipped with ERTMS by 2034.

The first national plan to install ERTMS was part of the national implementation plan prepared in 2015 in accordance with EU legislation. Although Norway is not an EU member, the country as a member of EEC (European Economic Community) cooperates with the latter in terms of legislation and policies, so European Commission directives have to be implemented. These include TSIs, and one of these is TSI CCS (Control-Command and Signalling). With Sweden being an EU member, it has been decided to synchronise installation of ERTMS with the Swedish ERTMS programme.

The objective is to replace all existing interlocking and signalling on the whole network, thus enabling seamless interoperability. For communication purposes the existing GSM-R network will be used. Various technological generations and types of signalling systems, of which Norway has 15, will have to be replaced. The result will be a complete elimination of relay cabinets and other related equipment. Of these, Norway currently has 336. The wayside ERTMS will completely replace mechanical, electro-mechanical and relay interlocking systems.

The replacement programme is a timely one. Most of the most common relay-based systems in Norway will reach the end of their designed lifespan soon, and as the signalling equipment ages, it is becoming increasingly difficult to maintain it and ensure high reliability.

These systems will be replaced with fully digital IP (Internet Protocol)-based equipment and for the whole network a unified system will be created, with a single control centre. ETCS Level 2 is to be installed, with a view to its future migration to Level 3. Bane NOR stated that it has to reduce costs to maintain and operate signalling systems especially in remote locations, where lines are not easily accessible. One result will be the significant improvement of signalling reliability with in consequence the better punctuality of trains. In the future it is also planned to increase line capacity, with the eventual adoption of moving block technology and the implementation of ATO.

Under the Nasjonal Transportplan (National Transport Plan, or NTP) finance of 21 billion NOK (about 2.8 billion EUR) has been made available for this project. No EU subsidisation is used.

The first stretch of line to be equipped with ERTMS was the 80 km between Ski and Sarpsborg on the Østfoldbanen, which runs southeast from Oslo and is called the “pilot line”. This project was not part of the NTP. The first test runs were made in 2013, and the first commercial operations using ETCS began in 2015. The results were very encouraging. Trains on this line now deliver one of the best punctuality levels achieved on the whole of the Norwegian network. In 2018, 92,4 % of all passenger trains on the line was punctual. Compared to the average of Norwegian lines which was 88,6 % in 2018. Bane NOR’s goal is 90 % punctuality for all passenger trains. A passenger train is considered punctual if it arrives at its terminal within a timeframe of 3:59 (local trains, intercity, airport express) or 5:59 (long distance trains, trains arriving from other countries).

The first „test line“ to be equipped with ETCS Level 2 is the 66 km line between Roa and Hønefoss, north of Oslo. In the spring of 2020, Bane NOR will together with their suppliers start the testing on this line with three trains. This will be followed by the northern section of the 729 km long Trondheim to Bodø Nordlandsbanen, between Grong and Bodø (509 km). Here the target start-up time and date are 14.30, on 31 October 2022. With Gjøvikbanen from Roa to Gjøvik following later in 2022. Oslo Sentralstasjon (Oslo S) is to receive ERTMS in 2026, and the NTP will be concluded in 2034, by which time the whole of the Norwegian rail network will be controlled using ERTMS. To avoid compatibility issues, Bane NOR decided to order trackside equipment from only one supplier, the contract for the 4,200 km of route being won by Siemens, which signed the contract being worth 800 million EUR on 6 April 2018. Siemens is to install ETCS Level 2 using its Trainguard 200 RBC (Radio Block Centres) technology. The line interlocking will be Siemens's Simis W, interconnected with the IP-based distributed wayside element controllers, called also Sinet.

The digitalisation programme will be very thorough, and will include, for example, the control of turnouts and level crossings. A 3D scanner mounted on infrastructure vehicle is used to obtain a complete digital „twin“ of all trackwork and installations, including every signalling device, and in the future every balise and other ERTMS trackside installations will be incorporated in that 3D model with automatic interface to the engineering tools. The scanner also analyse terrain to detect where for example cables were laid. Naturally, all train operators will be expected to have their vehicles fitted with ETCS on-board units (OBU), since from 2034 this will be the only form of on-board train control system which can be used. However, during the migration period, trains using both ERTMS- and national ATP-equipped lines (EBICAB 700, also known as ATC-2), will have to be fitted with Specific Transmission Modules (STM) from Hitachi or Alstom. The on-board ETCS equipment will be based on Alstom's Atlas range.

This will involve considerable costs for train operators. The Storting (Norwegian Parliament) decided to provide a Financial Aid Scheme for the acquisition on on-board equipment, this covering 50 % of the costs involved. 5 million NOK will be made available for prototype installation and 2 million NOK for batch installation. However, this assistance is available only for Rail Vehicle Owners that own vehicles that operate on the Norwegian railway network, have signed a Cooperation Agreement with Bane NOR and have signed the Onboard Contract with Alstom.

On 25 May 2018 Alstom and Bane NOR signed three contracts for on-board equipment for passenger, freight and infrastructure trains that will be used on the future ERTMS-equipped network. The work entailed includes system development, design and retrofitting of around 467 vehicles, of 55 different types, operated by 14 companies or vehicle owners - Bane NOR Transport, Baneservice, Beacon Rail Finance (Europe), BLS Rail, CargoNet, Flytoget, Grenland Rail, Leonhard-Weiss, Nordic Re-Finance, Norsk Jernbanedrift, Norske tog, NSB, Railcare T and Speno International. Each of these companies on 5 June 2018 signed separate contracts with Alstom for the on-board ETCS equipment most suitable for their vehicle types. The retrofitting is to take place in Norway, mostly at the Mantena works in Grorud and Marienborg. Contracts also incorporates maintenance of ETCS OBUs for 25 year period. The FLIRT EMU being equipped with ETCS.
Photo: Jakob Dalgaard

The third manufacturer involved in the NTP is Thales, which, under a contract signed with Bane NOR on 12 March 2018, is to supply new software for the remote Traffic Management System (TMS), the contract being worth 600 million NOK (about 60 million EUR). The solution will be based on the ARAMIS system.

On 31 October 2019 an important milestone in the digitalisation of the Norwegian rail network took place with the opening of Bane NOR's new testing, training and signalling simulation centre. This is situated in the suburb of Nyland („New Country“) to the northeast of Oslo city centre, and is collocated with Mantena’s maintenance centres. Campus Nyland covers an area of 2,500 m2 and will eventually have up to 50 employees and instructors. Its initial cost comprises the facilities as well as various training systems, some to be developed over the next 3 years. Campus Nyland is financed by the ERTMS-programme of Bane NOR. It is designed for the eventual training of over 5,000 railway workers in the operation and workings of ERTMS. A throughput will be of around 500 - 1,000 students annually depending on the ERTMS implementation plan. Both simulators and real equipment will be used in these training programmes, the students being also subjected to new digital training by using virtual reality and simulators. The teaching programme incorporates over 150 different ERTMS scenarios. A testing laboratory will also be available for hardware and software testing and evaluation of eventual problems and future development. Here the software simulates train movements and infrastructure, while ETCS hardware and its software is real and monitored in laboratory conditions. Bane NOR will also make Campus Nyland available to Alstom, Siemens, and Thales for the testing of their digital train control systems.

Campus Nyland will also be able to monitor operations on the first test line to be equipped with ERTMS between Roa and Hønefoss. This testing will start in spring 2020. The line between Grong and Bodø on the Nordlandsbanen will be the first line with ERTMS and is scheduled to be activated for commercial use at 14.30 on 31 October 2022. With this stretch active, around 12 % of the Norwegian rail network will be controlled by ERTMS.

Campus Nyland will also be able to monitor operations on the first test line to be equipped with ERTMS between Roa and Hønefoss. This testing will start in spring 2020. Alstom is now equipping the first of three test train to run on the test line. This is a Di8 locomotive owned by Vy, and the rebuilding will take place at Grorud works, near to Campus Nyland.

Siemens is amongst other finishing a 12 month long climate and RAM (Reliability, availability and maintainability) test of the new railway equipment, such as the Siemens Switchguard ITS 710 point machine, technical buildings, level crossing gates, axle counters and more. The testing have taken place in areas you will find Norways most challenging climates: Haugastøl, located in the mountains with snow falls, wind and fluctuating temperatures. Different is Bodø which is at a sea level whipped with salty sea air.

In Røros there is a very cold climate, and Romeriksporten 14.5 km two track tunnel with maximum service speed “offers” for tests a lot of dust, humidity and pressure waves. On 13 November Siemens and Bane NOR inspected the test objects at Bodø station. The test has revealed some improvement suggestions. Amongst other, changes have been made on the point machine for easier access for engineers.

Before Bane NOR can take ERTMS in commercial use, there are lots of construction work needed to be done along the railway. This includes amongst other establishing cable paths at stations, sidings, crossings etc., foundations for new technical houses and power supply for new installations, including backup power. The Norwegian ERTMS programme are now tendering three contracts for further construction work.