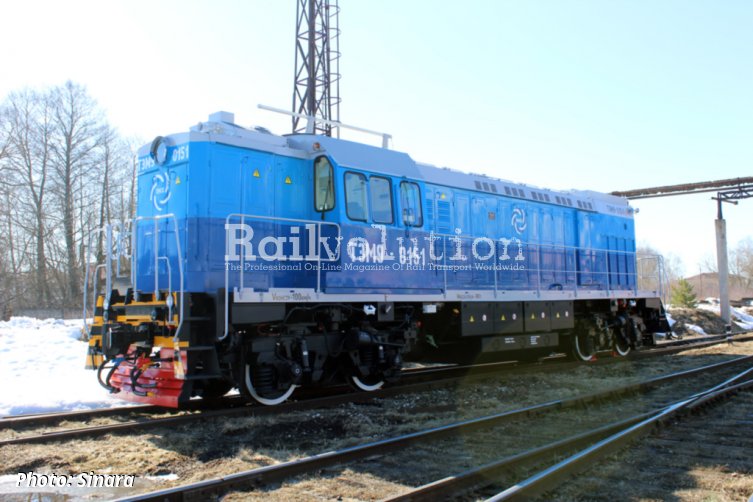 On 24 August 2020, Sinara Transportnye Mashiny signed a contract with Tulachermet of Tula, a large producer of various iron grades for foundries and steel works, for delivery of four Class TEM9 diesel locomotives, built at LTZ (Lyudinovsky teplovozostroitelny zavod, Lyudinovsky diesel locomotive works). The first two, TEM9-0153 and 0154, were handed over to the customer in January and February 2021, and the second duo, TEM9-0151 and 0155, at the end of March 2021.

According to a special order of Tulachermet, the new shunters are equipped with additional heat and noise insulation of the driver’s cab to ensure a higher level of working comfort. The piping system also received additional protection from external factors. In total, LTZ delivered 12 Class TEM9s to Tulachermet. Previously, LTZ also supplied three Class TGM4b shunters to the company.

On 6 April 2021, STM signed a contract with Cemix and LB Minerals for delivery of two Class TEM9 locomotives. Both companies form part of an Austrian-based manufacturer Lasselsberger Group, producing raw materials, building materials and ceramic tiles, and are located in the Republic of Bashkortostan.

The locomotives will be involved in the entire production chain, from extraction of raw materials to shipment of finished products. The first one, preliminary designation TEM9-0157, will be handed over to Cemix at Abzelilovskiy Rayon (near Magnitogorsk) in May, and the second one, preliminary designation TEM9-0160, is scheduled to be delivered to Pervomaysky (near Izhevsk) in August 2021.

The locomotives will be fitted with additional features, including the KVARTA fuel consumption metering system with a GLONASS navigation module, a heating system for the entire locomotive and suchlike.

The prototype of the Class TEM9 was built in 2009, and in December 2020, LTZ built its jubilee locomotive, TEM9-0150, delivered to Targon (a subsidiary of ERC Holding, Kazakhstan). The 100 km/h Class TEM9s have a Bo’Bo’ axle arrangement, a DC/DC power transmission and a 930 kW Type 6DM-21 diesel engine, produced by UDMZ (Uralsky dizel-motorny zavod) of Yekaterinburg, also part of STM.