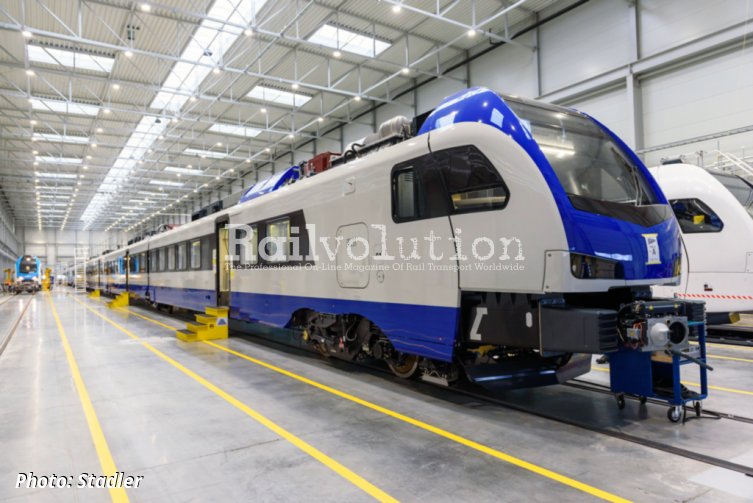 One of Stadler's current orders is the second batch of Class ED160 units for PKP IC. The tender was announced at the end of 2017 and on 21 August 2019 a contract was signed with Stadler for the delivery of 12 eight-car FLIRTs and their maintenance by the manufacturer for a period of 15 years.

The new trains will be very similar to the 20 Class ED160s of the first batch, which was built in 2015. The final assembly is provided by Stadler Siedlce (while production of the first batch involved a collaboration with Newag).

Like the first batch, the new FLIRTs will have first and second class cars and a bar car. For the transport of passengers with disabilities, again two spaces will be available. For bikes again six holders will be mounted, however without the tip-up seats, resulting in a slightly smaller number of seats (354) than in the first batch (360). Furthermore, a new, larger toilet meeting the TSI PRM requirements will be installed, new seats of a Polish production (Growag) will be fitted (in the first batch there were Grammer seats) and the interior lighting will be slightly different.

Units ED160-021 to 032 will be equipped with the on-board ETCS Level 2, Baseline 3 from AngelStar (a Stadler/MerMec joint venture), while ED160-001 to 020 were fitted with the ETCS OBU Level 2, Baseline 1, supplied by Siemens. On account of all the differences compared to the first batch, the second batch will be subjected to an additional approval process at UTK.

The delivery of the first two new FLIRTs is to take place within 18 months from the beginning of the contract, i. e. theoretically by February 2021; however, it was a date agreed prior covid. Both units are then to be put into test service with passengers for a period of 6 to 12 months, when a minimum of 250,000 km is to be covered. The remaining ten trains are to follow within 48 months of the beginning of the contract, i. e. until August 2023.

PKP IC acquires new FLIRTs without an EU subsidy, so it can use them on various lines, without restrictions. The operator’s initial plans envisage use on the Szczecin - Lublin, Szczecin - Kraków and Kraków - Lublin routes. This is to achieve a uniform quality standard with other lines that are already served by the Class ED160 EMUs, such as Gdynia - Łódź - Kraków/Przemyśl, Kraków - Warszawa - Olsztyn, and suchlike.