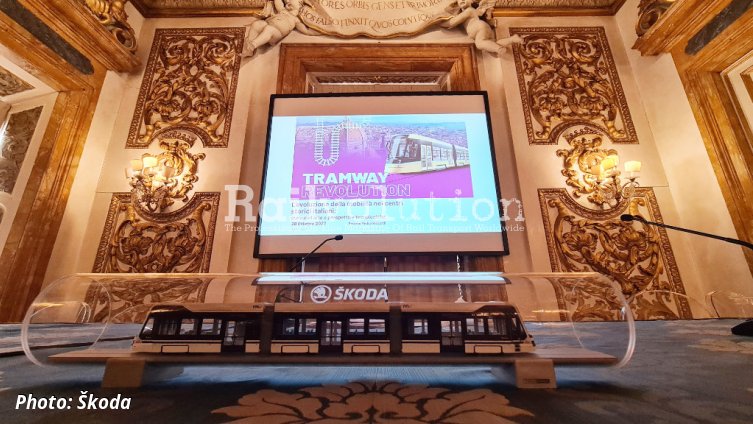 On 28 October, Škoda Group inaugurated the offices of its new subsidiary in Florence. With this step, the largest Czech manufacturer of public transport vehicles strengthens its position on the international market. Olesea Lachi, who has long been responsible for sales of rolling stock in the Group, has become the managing director of the subsidiary. To celebrate the opening of the subsidiary's offices, the Czech manufacturer organised an event entitled "Tram Revolution", which was attended by representatives of Italian institutions and industry experts.

During the roundtable, opinions, studies, experiences and concrete programs on the future of mobility were gathered among needs, urban limits, combined strategies and future projects. Discussions were held on how to sustainably improve the viability of historic cities such as Toscany, which characterise Italy in a distinctive way. "The experience of Florence speaks for itself: the tram is essential for the daily life of cities, changing and improving them," said Florence Mayor Dario Nardella.

"The specifics, preferences and habits of Italian transport operators are similar to those of the Czech ones. Many cities in both countries are UNESCO heritage sites and offer stunning historic centres characterised by narrow streets, arches with small radii, which place higher demands on vehicle manufacturers. Medium-sized cities have a long tradition of trolleybus transport, but often have to cross several sections without overhead lines. The countries are also united by their focus on the Green Deal and sustainable mobility solutions. All this together predisposes the Škoda Group to focus on the Italian market," says Olesea Lachi.

The discussion highlighted the weaknesses of areas with a medieval/renaissance urban layout, such as Florence, and then went on to reveal some development plans to show what a city of the future could look like using state-of-the-art technologies such as those of the Škoda Group.

Thus, mobility and road system solutions are proposed that guarantee the best sustainability, livability and safety for citizens. In the city of the future, according to the Škoda Group, the tram drives itself and runs completely safely thanks to the latest technology. In the near future, cities will see more frequent use of battery-powered vehicles that are not only environmentally friendly and sustainable, but also able to move more nimbly in historic centres with narrow streets.

In Italy, Škoda will focus its attention on railways as well as rolling stock for urban transport. It will offer its partners a comprehensive solution - from the production of individual components, to the delivery of complete vehicles and their subsequent maintenance. By making a similar decision in the past, the company has successfully entered the German or Finnish market, enabling it to be more within reach of its clients and to develop its business in these areas in a fundamental way.

The Czech company has already worked on several orders for Italian customers in the past. Its trolleybuses can be seen in Bologna or Cagliari, where it has also supplied trams. Passengers can take EMU for a ride in Domodossola. Italy is thus one of the fifty countries where Škoda has delivered its products.