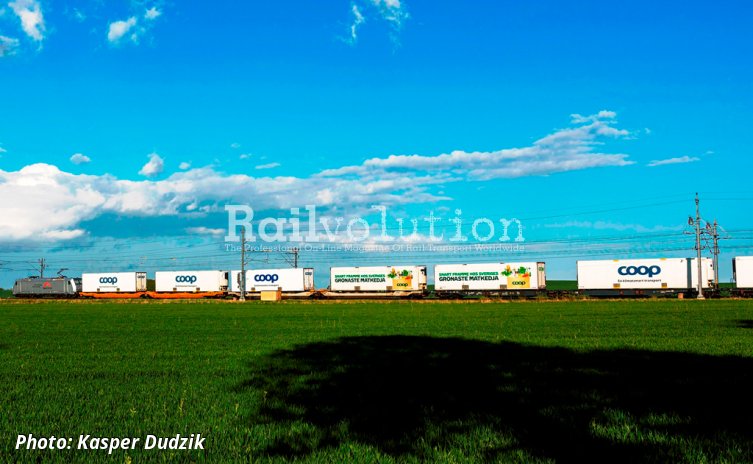 TX Logistik AB, a Swedish subsidiary of Germany's TX Logistik AG, has run a train with a length of 838 m in Sweden. The rail logistics company, which is part of the Mercitalia Group (Gruppo FS Italiane), operated the fully loaded train on the approximately 500-kilometer route between Malmö and Frövi (Örebro province). Foodstuffs from the Swedish retail chain Coop were transported. The Swedish transport infrastructure authority Trafikverket was the third partner involved in the test run. Two test runs took place on 8 and 9 May.

So far, only trains with a maximum length of 630 m are permitted on most routes in Sweden, which in this case means 18 articulated pocket wagons carrying 36 semitrailers or swapbodies. The length of 838 m, including one Class 185 locomotive, enables a rake of 24 wagons, loaded with 48 semitrailers. The highest permitted speed of the train was 120 km/h.

Coop transports food and other goods by rail in Sweden from 2009. Since 2012, TX Logistik has been running for the retail chain between Bro, 30 km northwest of Stockholm, and Malmö. Just two years ago, the number of round trips was doubled from ten to twenty. Today, 30 % of Coop's transports are handled by rail, and the retail chain would like to increase the share further.

For regular operation of such long trains in Sweden it is necessary to extend the braking tables, which only allow trains of the length up to 720 m. For this purpose, the appropriate tests must first be carried out. Last year, test run of a similarly long train on the Hamburg - Malmö route took place. Train lengths of 835 m are already routinely allowed between Hamburg and the Öresund Bridge.