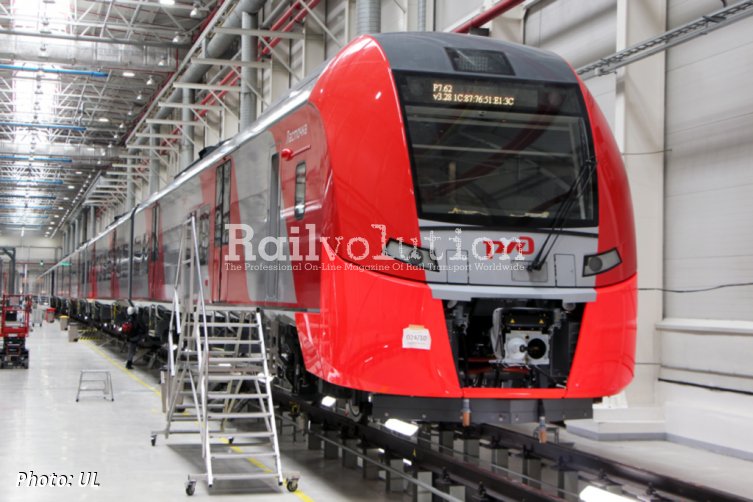 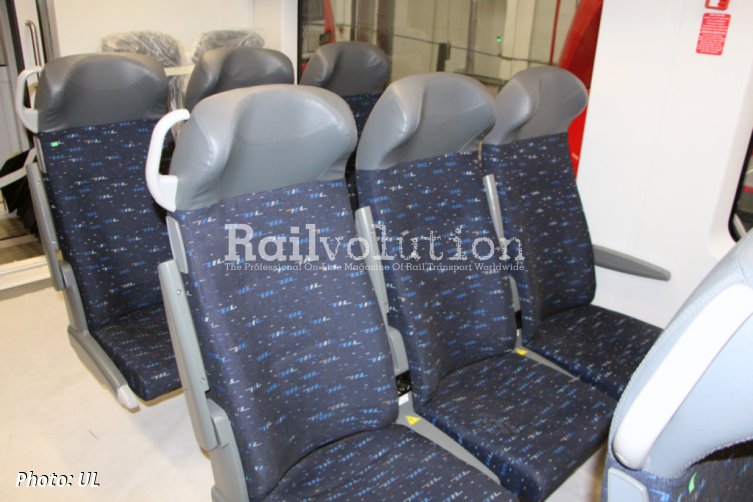 In early April, unit ES1P-024 was completed at the UL works. This is the first Lastochka of another new modification, namely a dual-voltage (3 + 25 kV) ten-car EMU designed for interregional transport for a distance of up to 700 km. The train is fitted with a more comfortable interior which meets this requirement better than that of the Class ES1P EMUs built so far.

The modified interior was designed using the experience from the operation of Class ES2G Lastochkas on the Moskva - Nizhny Novgorod route. The aim is to replace the two five-car Class ES2G units running in multiple.

The new version uses powered intermediate cars, which provide the necessary traction parameters of the train and which were developed at UL in 2018. These allow the extension of Lastochkas to 7, 10 and 12 cars and were first used in the then newly created seven-car Class ES2G EMU (ES2G-087). Three powered cars were incorporated, two end cars and one intermediate one, with a total output of 4,398 kW.

The seven-car ES2G-087 was in autumn 2018 enlarged by three more cars, becoming the very first ten-car Lastochka, with two powered end cars and two intermediate powered cars, however only for 3 kV DC. Therefore, a ten-car dual-voltage version of the Class ES1P with an output of 5,860 kW has now been created, which also has a maximum speed of 160 km/h. Thus it is basically similar to the previously intended Class EM long-distance Lastochka.

In ES1P-024 for the first time, a new type of seats with increased comfort was used in the Class ES1P (Premium), not only in business class, which has another VIP zone in this modification, but also in economy class. In addition to the possibility of adjusting the cushion, the angle of the backrest can be changed, which increases passenger’s comfort when traveling long distances.

The seats are supplied by KF-KIEL, Novorossiysk (founded in 2011 by Kiel International, Germany, and KF Development, USA), which is a main supplier for Lastochkas. All seats are equipped with power sockets and USB ports.

In total, the new Lastochka has 727 fixed seats, two places for people in wheelchairs and seven folding seats. Also new in the ES1P-024 is that the two rows of seats are inverted so that (some) passengers can choose to sit according to the direction of travel. The number of WC cubicles in the train has increased to 11, one of which is suitable for PRM passengers. By way of comparison: in the ten-car Class ES2G EMU there are six WC cubicles and in the two five-car Class ES2G EMUs even only four.

In April, ES1P-024 was subjected to tests at the Verkhnaya Pyshma works and will subsequently be sent for certification tests at the Shcherbinka VNIIZhT circuit, which are to last until the end of May. After authorisation, ES1P-024 is to start operation in the summer, probably on the Moskva - Nizhny Novgorod route. After that, the batch production will start, this year RZD is to receive a total of seven Lastochkas of this new version.

As for the above-mentioned long-distance ten-car Class EM Lastochkas, intended to be developed for FPK in 2017, this did not materialise. When we asked what the situation is with the planned Lastochka EDMU and BEMU versions, UL replied that it is „Ready to develop such trains within three years following the customer demand“.

At the most advanced stage is the intention of the double-deck Lastochka, for which conceptual and construction projects are currently being prepared. It will be a seven-car train based on the Desiro HC EMU, with an output of approximately 4,400 kW and a maximum speed of 160 km/h.