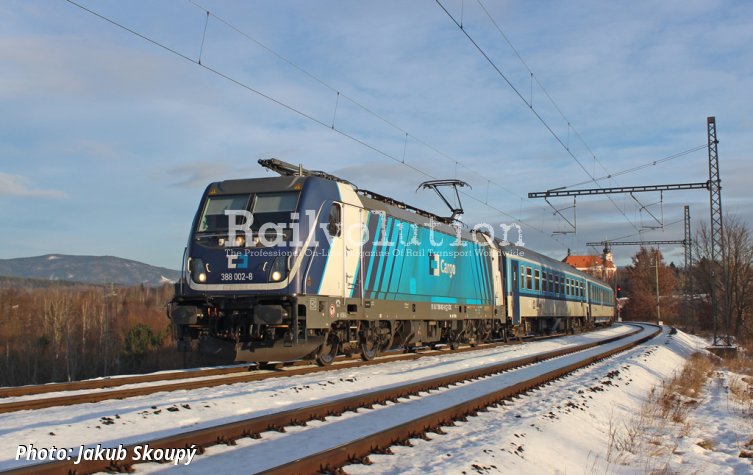 Conditions given by the Czech rail authority Drážní úřad (DÚ) for test operation of the very first TRAXX MS3 locomotives in revenue service, 388.001 and 002, were fulfilled recently. In late June 2020, these two machines, which are the first ones from the ČD Cargo order, started regular operation in test regime. DÚ required for this to cover 50 000 km, thereof 10 000 km in passenger service. This had to be clocked up by single one of those two locomotives, which were subject of the test operation, no matter which one reaches this first.

The mileage of 40 000 km in freight service was covered soon, while those 10 000 km in passenger service not before December 2020. For this purpose, 388.002 was hired to České dráhy. This stage took somewhat longer time than supposed, because part of the coaching stock of the Praha - Cheb trains, which was envisaged for this test service, is not fully compatible with the TSI LOC&PAS communication standards and the locomotive could not control the functions of selective door opening and emergency brake override.

In the end, these functions were successfully verified using the RegioJet locomotives in service of the latter operator, while the first two RJ's new TRAXXes were meanwhile also put in test service in December 2020 (388.202) and January 2021 (388.201).

In early February, ČD Cargo's 388.002 therefore finished its test operation in passenger service, which was eventually executed only on the Karlovy Vary - Cheb section, where limited communication functionality was still sufficient. On 9 February 2021 the locomotive was moved to Praha and is now back in freight service with ČD Cargo.

As the ČD Cargo TRAXX MS3 locomotives were the very first ones to start the test operation, the conditions of a test service were defined to these, while the RegioJet machines do not already need to fulfill any conditions.

Now it is still long way towards full ERA granted type approval, however under the test service regime the machines still can be operated on the Czech network. Therefore deliveries of further TRAXX MS3s from the ČD Cargo and RJ orders to the Czech Republic can start in coming weeks, so that these can be put in service, too.