Development Of The RZD Double-Deck Trains 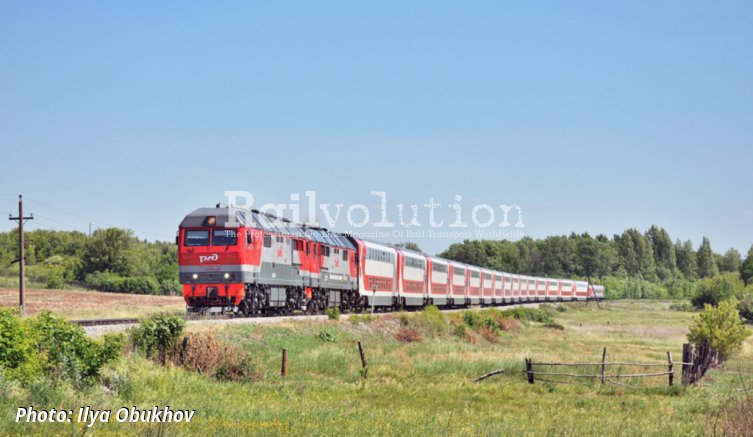 At present, FPK has 623 double-deck cars (sleeping and seating cars for daily trains) in its fleet, from which it makes 20 train pairs on 14 routes. For this summer season FPK has further increased its offer: a new double-deck train 277/278 St. Peterburg - Anapa was introduced to meet the increased transport demand to the Russian Black Sea coast, and since 8 May train 72/71 Moskva - Cheboksary was converted to double-deckers.

This is the first RZD double-deck service in diesel traction, for which some Class TEP70BS locomotives had to be adapted to supply these rakes with electric energy and to operate in multiple in order to cope with all the traction requirements. Until now, due to the impossibility of providing electrical power from diesel locomotives, the use of double-deck rakes was limited to electrified lines only.

This moment marked the fulfilment of the plan announced back in 2017, according to which Kolomensky zavod (KZ) was to start preparing Class TEP70BS locomotives modified for multiple operation aiming to make them possible to haul longer and more power-demanding trains. The first locomotive was then expected to be ready by the end of 2017 and type approval was awaited in 2018.

On the locomotives in question was modified the electric energy supply system and the locomotive control system. The first TEPS70BS with the new control system was 316. Since that moment all TEP70BS machines are fitted on this way. Until now the factory built 40 locomotives, the most recent one TEP70BS-356 for Demirýollary.

Additionally, there is a modernisation initiative for older TEP70BSes, starting with 221 and higher, which will receive the aforementioned modifications as part of their scheduled overhauls. This is in responsibility of LokoTekh, a TMH subsidiary focused on vehicle maintenance.

Also in 2018, it was announced that KZ was preparing a new mainline two-section diesel locomotive capable of hauling double-deck rakes on non-electrified lines, but no such locomotive has yet rolled out of Kolomna. And it is questionable whether it will ever come out again, if the current FPK requirements will be covered by the Class TEP70BS locomotives running in multiple. Moreover, the new RZD strategy is not to buy diesel-only locomotives from 2025.