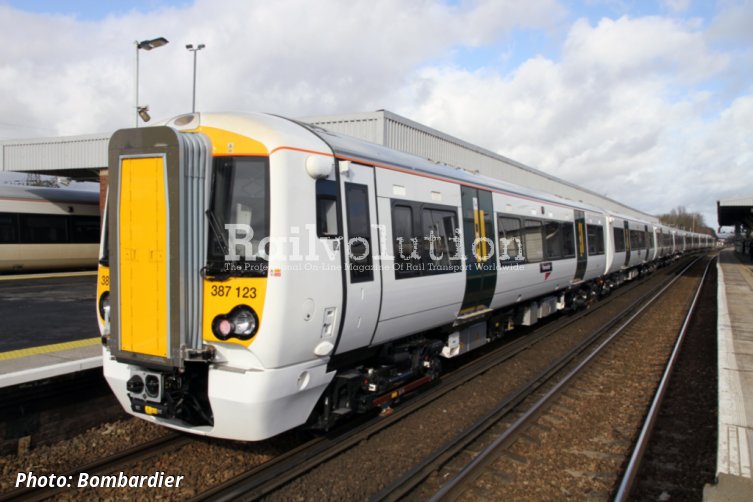 On 22 December 2020, Bombardier Transportation has announced that it has signed a framework agreement with Porterbrook, the UK rolling stock company, to fit ETCS on-board units (OBU) to Electrostar EMUs. This project falls under the UK’s Digital Railway Programme funded by the Department for Transport through Network Rail and is managed by the National Joint ROSCO Programme (NJRP).

Under the framework agreement, Bombardier will deliver the design work needed for the fitment of the ETCS equipment and the BOMBARDIER EBI Cab 2000 onboard Automatic Train Protection (ATP) system to all Electrostars in the UK - the most numerous EMU type currently operating in the country.

The initial agreement is worth 11.3 million GBP to design and fit prototype ETCS OBU to a Porterbrook-owned Class 387 Electrostar train operated by Govia Thameslink Railway (GTR). The prototype contract has been authorised by Porterbrook as the lead rolling stock asset owner for the Electrostars, supported by Angel Trains, Eversholt Rail, Akiem and QW Rail, under the NJRP.

Once the prototype receives regulatory approvals, all other Electrostars owners and operators will be able to opt to have Bombardier fit the EBI Cab 2000 to their trains under the same framework agreement.

ETCS is becoming the standard signalling and train controlling technology on railways across Europe and beyond, and in the UK it is being rolled out on a national basis, starting with sections of the East Coast Mainline, Thameslink and Elizabeth lines. Under the agreement, the equipment will be fitted at operator depots or Bombardier’s Ilford facility, and design work will be undertaken at Bombardier’s Derby facility.

We asked Bombardier, when the prototype ETCS installation is expected to be finished, when it is expected that it will be authorised, when the batch retrofitting is envisaged to start, how many Electrostars will be retrofitted in total and how many can be dealt annually.

Bombardier explained to us: "The initial contract covers just one train, a GTR Class 387/1 ELECTROSTAR and the design element for all the other ELECTROSTAR classes. Once this prototype (‘first in class’, FiC) has been completed at our Ilford facility in London - it is expected to take a matter of weeks in early 2021 - it will then be tested and submitted for regulatory approval by the UK Office of Rail and Road (the ORR).

For context, the ELECTROSTAR is the most numerous EMU in service in the UK with over 2,700 vehicles."

We can add that the Electrostar story began in March 1997 when Prism Rail (taken over in 2000 by National Express) ordered a batch of 44 Class 357.0 EMUs from Adtranz, which was then the Litchurch Lane works incumbent. This was a notable order, being the first one in Britain for EMUs since privatisation. These were the only Electrostars to be built without inter-car gangways in their end cars. They entered service on 31 March 2000 on LTS Rail’s service between London Fenchurch Street and Shoeburyness (now part of the c2c network).

Over the 17 years which followed, the Electrostars became synonymous with new trains ordered for the many suburban services radiating from London. In 2001 Litchurch Lane passed from Adtranz’s hands to Bombardier’s, and following the closure of Alstom’s Washwood Heath factory (the former Metropolitan Cammell works) in 2005 it was Bombardier which quite literally held the fort for the British passenger rolling stock construction industry until the advent of Hitachi in Newton Aycliffe a decade later.

And the output of Electrostars was very impressive, keeping Litchurch Lane works alive during the general slump in new train orders around 2011 - 12. Of the various Electrostar sub-classes the numbers built were:

24 November 2017 was, perhaps, a sad day at Bombardier’s Litchurch Lane works in Derby. For it was on that day that the final Electrostar EMU to be built there, 387 174, left the complex. This was a four-car train, destined for Great Western Railway’s Didcot and Newbury to London Paddington services. Like most recent Electrostars, it was dual-voltage (25 kV AC/750 V DC), though its third rail capability will not be needed in regular service while it remained with GWR.

There was just one export order. This involved the 24 four-car Electrostars ordered for Gautrain services between Johannesburg and Pretoria/Rhodesfield, some of which were built at Litchurch Lane, with the majority being sent out to South Africa in kit form.

In all, the Electrostar family ran to 679 trains and 2,805 cars. These were operated by c2c, Southeastern, Southern, London Overground, Greater Anglia, Great Northern, Great Western Railway, Gatwick Express and Gautrain.

And the Electrostar has a worthy successor in the Aventra EMU, designed to meet the latest TSI specifications (which the Electrostars are not), which came into force in 2017. Essentially the Aventra is a lighter, more energy-efficient version of the Electrostar design. In just four years, between February 2014 and early 2018 Aventra orders had nearly outstripped those for Electrostars, with 398 trains (2,618 cars) on order, being built or in service.