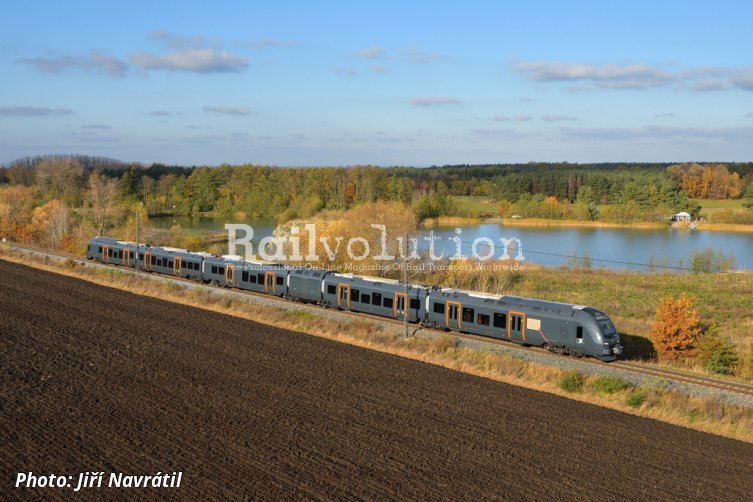 One of the newest vehicles tested at the VUZ Velim test centre is the first Class 76 FLIRT EDMU for Norske Tog. It forms part of the batch of 14 of these trains ordered in 2017 (2 units) and 2018 (12 units). Its cars were built at Stadler Minsk works and then sent to Siedlce for incorporating the Bussnang-built Power-Pack and commissioning.

Initially it was sent for first testing to Germany in mid-September, and subsequently it is being tested in the Czech Republic. In opposite to the FLIRT EMUs built so far for Norway, the Class 76 EDMUs are delivered in a neutral painting, which will later be supplemented by vinyls in corporate colours, according to the operator that will use these vehicles.

Each Class 76 EDMU is equipped with a centre-situated Power-Pack module with diesel engines, which enables the train an operation on non-electrified lines. In addition, the trains are equipped with four traction batteries with a total capacity of 112 kWh, located on the roof of the cars, which store energy from the EDB and provide support for the train during acceleration in a diesel mode.

The Class 76 FLIRT EDMUs will operate in the north of Norway, where they are envisaged to start regular passenger service sometime in 2021. Due to the coronavirus situation, the exact dates cannot be precisely determined now. At present also 76-02 has been completed, which is already being tested in Norway. FLIRTs 76-03 and 04 are now in the final assembly stages at Stadler Minsk works.