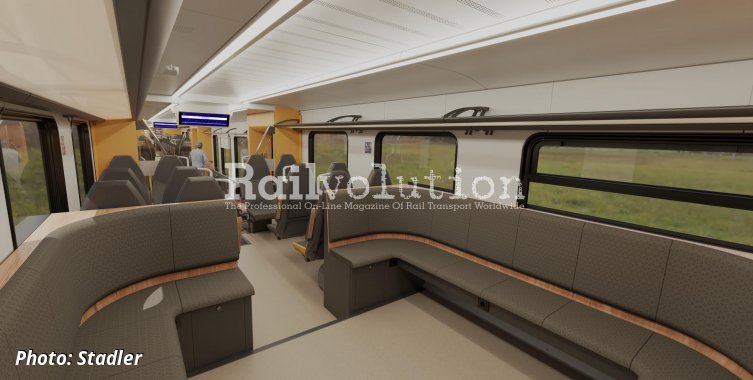 On 25 November 2021, Stadler was awarded a contract by DB Regio for delivery of 44 two-car FLIRT AKKU BEMUs. Both companies are bringing the battery-electric multiple units to Pfalz (Palatinate) on behalf of the commissioning authorities responsible for Rheinland-Pfalz, Saarland and Baden-Württemberg

The use of BEMUs was prompted by a contract granted to DB Regio within the framework of the European award procedure for the Pfalznetze (Palatinate networks; two lots) on 25 November 2021 by the relevant commissioning authorities:

The 160 km/h 55 m long trains will have a capacity of 325 passengers, of them 172 seating (16 in first class). From December 2025, the first of the batterry FLIRTs will enter passenger service on the following routes of Pfalznetz Los 1 (Palatinate network, lot 1) in the southern and western Pfalz, replacing the diesel vehicles currently in use by the end of 2026.

This is already the second contract for FLIRT AKKU BEMUs in Germany, following the one from 2019 to supply 55 battery-powered FLIRTs for the Nahverkehrsverbund Schleswig-Holstein. Moreover, thanks to the new order from DB Regio, Stadler was able to celebrate the sale of its 2,000th FLIRT in total - shortly before its 20th birthday.

The first „Flinker, Leichter, Intercity- und Regional-Triebzug“ („Fast Light Intercity and Regional Train”) was developed following the 2002 contract of Stadtbahn Zug on behalf of SBB. The four-car Class RABe 523 EMUs went into passenger service in 2004. Since then, the FLIRT has become an international bestseller, being in service in almost every climatic zone, from the equator to the Arctic Circle, operating in 20 countries (in Germany 528 FLIRTs are working or on order).

Two- to six-car compositions can be built in standard-gauge and broad-gauge versions for maximum speeds of 160 to 200 km/h. In addition to electric, diesel or bi-modal drive, FLIRTs are also available with a battery and hydrogen drive. The latter is at present being developed for the American San Bernardino County Transportation Authority (SBCTA).