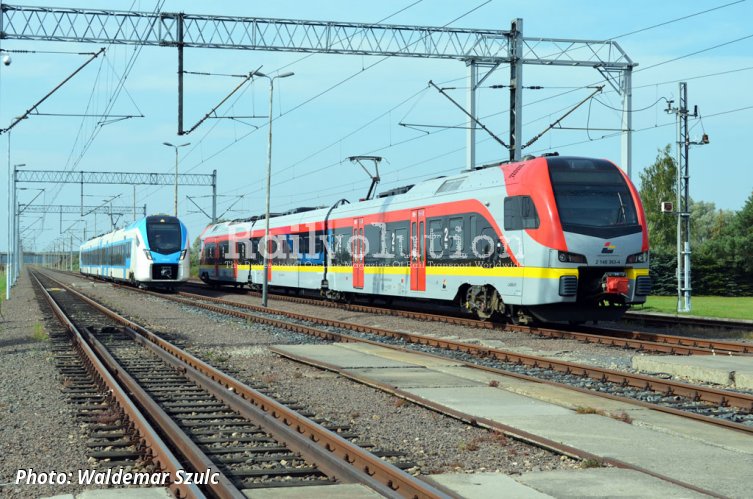 At the Źmigród test circuit are now also being tested various FLIRTs. One of them is 2 140 363/364, which was the first of two-car FLIRT EMUs of ŁKA (Łódzka Kolej Aglomeracyjna, Łódź Agglomeration Railway) to be retrofitted with an intermediate trailer.

The newly three-car unit was completed in September at the Siedlce works and following its tests at Źmigród it will underwent tests of running in multiple with the two-car Class 2 140 EMUs in and around Łódź by the end of this year. The second unit of the Class 2 140 to insert an intermediate trailer will be sent by ŁKA to Siedlce in 2021.

The photo also shows the FLIRT EMU 510/515-001 + 002, the first of a batch of 21 units of this type for SŽ. These trains are being built at Stadler Minsk and for their testing on the 1,435 mm track gauge is responsible Stadler Siedlce. Currently three FLIRT EMUs are complete and the fourth one is now being commissioned at Siedlce. In the meantime, 510/515-003 + 004 left the VUZ Velim test centre on 2 October 2020. Its tests there were focused on EMC, noise, power supply and commissioning of the AC traction equipment of these triple-voltage (3, 15 and 25 kV) units.