Gazoturbovoz At The End Of The Road 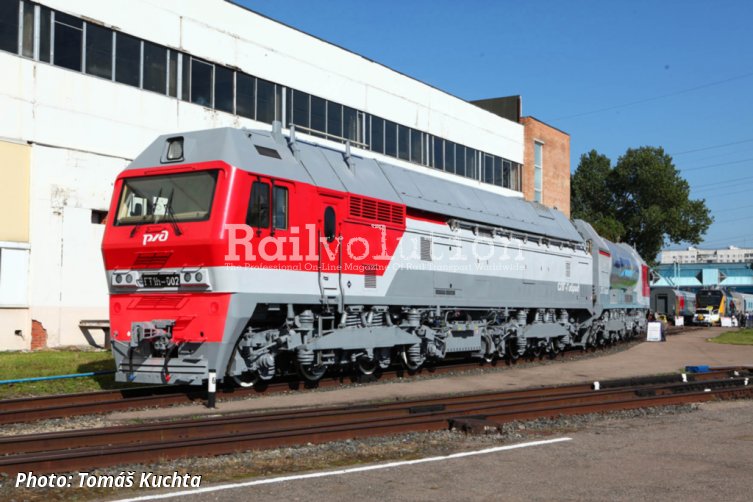 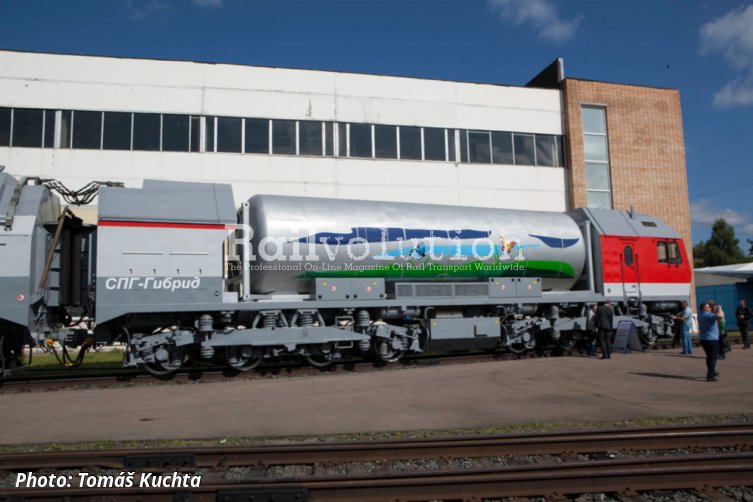 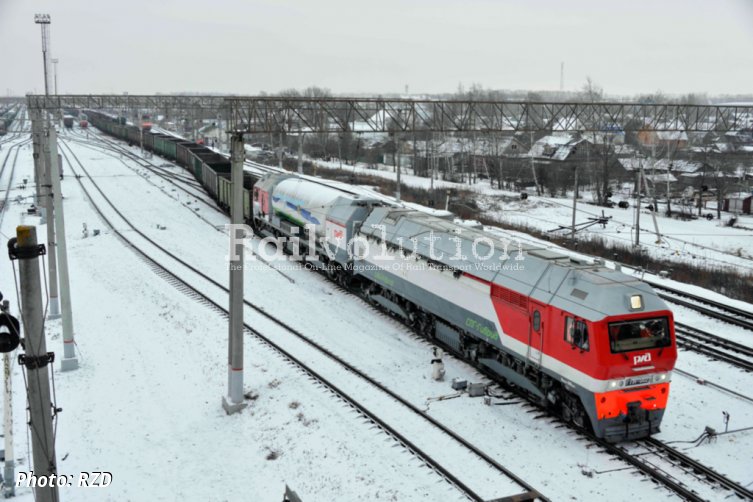 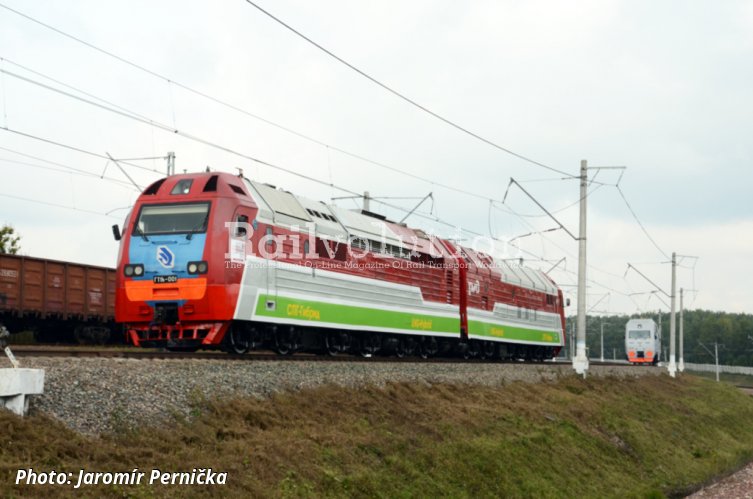 In June 2012, RZD awarded Sinara - Transportnye mashiny (STM) the contract to build the gas-turbine locomotive („Gazoturbovoz“ in Russian), intended for use on non-electrified lines especially in Siberia and the Far North, hauling heavy freights. The design documentation was developed by VNIKTI, which also took part in the GT1h-001 prototype project. Then in mid-January 2013 LTZ started building the prototype designated GT1h-002.

The RZD contract stipulated a deadline date of 1 July 2014 for completion of the prototype, together with certification realised by RS FZhT. It was stated that if GT1h-002 fulfills the technical and economic parameters established by RZD, the latter will sign, by 1 January 2015, a contract for 39 more locomotives, to be delivered by 2020. This idea did not materialise, though.

GT1h-002 is a true giant on rails. It is a two-section locomotive and is even more robust than the GT1h-001 twelve-axle prototype, since it has sixteen axles in a Do’Do’+Do’Do’ arrangement. Each of its sections is 21.5 m long, giving a length of 43 m. The bowser section (with the CNG tank) and the traction section each weigh 184 t, giving a combined weight of 368 t. Maximum axle load is thus 23 t. The top service speed of GT1h-002 is 100 km/h, while it can negotiate curves with a minimum radius of 125 m.

The bowser section accommodates the CNG tank, housing at least 20 t of pressurised gas, while the traction section incorporates the gas turbine. The gas tank is a self-contained module mounted on the bowser’s main frame, and replacement of an empty tank by a full one can be achieved by simply lifting the module off and on, using a crane. This easy „refuelling“ technique takes only around 30 minutes. Alternatively, the tank can be topped up en route, at refuelling points. A complete refuelling session takes between 1.5 and 2 hours, depending on the rate at which the compressed gas can be pumped into the tank. There is the gas pipe which links the bowser and traction sections.

The design of the underframe of the „Gazoturbovoz“ is based on that of the Class TEM7A diesel which is also similar to the Class TE8 and TEM14 designs. The driver's cabs are similar to those of the Class TE8 diesels. GT1h-002 has a turbine power of 8,450 kW, delivering 6,650 kW (continuous rating) and 7,335 kW (one-hour rating) at the traction motor shafts. The maximum tractive force is 981 kN. The turbine powers the AC synchronous traction alternator, which feeds the DC traction motors via a rectifier.

As indicated by the „h“ in the class designation, there is a „hybrid“ element in the traction chain. The GT1h is equipped with a speedily rechargeable battery that can be used for shunting operations (at depots or when running to a train) without the use of the turbine. The batteries allow an operating range of roughly between 60 and 80 km. This will speed up the work, since the start-up of the main gas turbine engine takes 15 minutes.

"Gazoturbovoz" started regular work on the RZD network on 17 February 2017, between Yegorshino (northeast of Yekaterinburg), Alapaevsk and Serov-Sortirovochny (marshalling yard). Here it was hauling freights of suitable trailing loads to reflect its considerable abilities. Its maintenance was provided by STM-Service, one of the Sinara - Transportnye mashiny subsidiaries.

The Sverdlovskaya doroga has the necessary infrastructure for the operation of gas-turbine locomotives. There is an LNG complex near Yekaterinburg with a locomotive refuelling point. Moreover, the network is only partially electrified, so there are plenty of opportunities for these locomotives to be put to work, on long non-electrified stretches of line with a variety of gradient profile characteristics.

GT1h-002 was not the first gas-turbine locomotive to be used on the Sverdlovskaya doroga. The pioneer machine, GT1h-001, has been in service there since 2013, and GT1h-002, which is an improved version, has also been there before on test runs. During 2014 and 2015 GT1h-002 was put through its preliminary and acceptance tests, which it passed. Between October 2015 and May 2016 it was tested satisfactorily on freights in the Tyumen district. Then this 368-tonne machine hauled 78 trains, including 56 with trailing loads of up to 8,937 t.

In December 2016 it passed the certification tests realised by VNIKTI of Kolomna and received a TR TS 001/2011 certificate of conformity from RS FZhT. Certification enabled the locomotive to be used in regular service. GT1h-002, becoming thus officially part of RZD’s fleet, remained, however, still only as a prototype and no definitive production schedule for a batch has been announced.

From the very beginning it was interesting to see the results of GT1h-002’s tests - how the more complex (and noisier) turbine technology compares with the efficiency of diesel-engined locomotives also able to offer similar power and tractive effort characteristics (for example, the 12-axle Class 2TE116UD is fitted with two 3,100 kW engines and delivers a tractive effort of 2 x 403 kN). Moreover, a CNG supply network has to be created for a fleet of gas-turbine locomotives.

To remember is that following first tests, RZD published the results of the cost effectiveness of the project: improved environmental friendliness compared with diesel locomotives, a reduction in harmful emissions of up to 70 %, the cost of CNG being between 30 and 50 % lower than that of diesel fuel and 20 t of pressurised CNG being required for the locomotive to cover 1,000 km between refuelling. No special infrastructure modifications for the operation of gas turbine locomotives were required.

RZD’s project to develop and expand the use of gas-turbine locomotives took a significant step forward in late summer 2019, after several years of stagnation. On 28 August 2019 at Pro//Motion.Expo in Shcherbinka STM and RZD signed a Memorandum of Intent under which STM would provide lifespan servicing and maintenance for the fleet of Class GT1h locomotives, of which Sinara’s Lyudinovsky works is ready to supply 23 by 2025. These were envisaged for use on the Sverdlovskaya doroga, and in the longer term not only on the exacting BAM, but also on the Northern Latitudinal Railway, which is slowly being rebuilt and revived between Labytnangi and Novy Urengoy, across northern Siberia.

However, in spite of several years of testing since 2013 and a lot of superlatives, the batch GT1h locomotives has never been ordered. We asked STM to evaluate the current situation: „About GT1h locomotive there is not much to share as we are facing some difficulties and now our design department are coping with it. But we still have a strong belief in the technology and hope that all possible faults will be settled and we will be able to present our new development to the market.“

RZD, however, sees the situation quite differently, and its press department commented as follows: „Based on the results of the test operation, questions arise regarding the profitability and reliability of the Class GT1h. In particular, there is still no gas turbine designed specifically for locomotives, which increases operating costs. That is why RZD is currently interested in other locomotives for alternative fuels, not turbine locomotives.“

In light of this expression, we will probably no longer be surprised to refute the questions that have accompanied the project from the beginning, especially given the experience of other gas turbine vehicles in the past. At present, the „Gazoturbovoz“ is not operational.

Moreover, the last sentence from RZD's statement also corresponds to the latest developments in the field of environmental efforts at this operator, as it recently announced that after 2025 it will only purchase locomotives powered by electricity, natural gas or other alternative energy sources.