GoldenPass Express At The Start 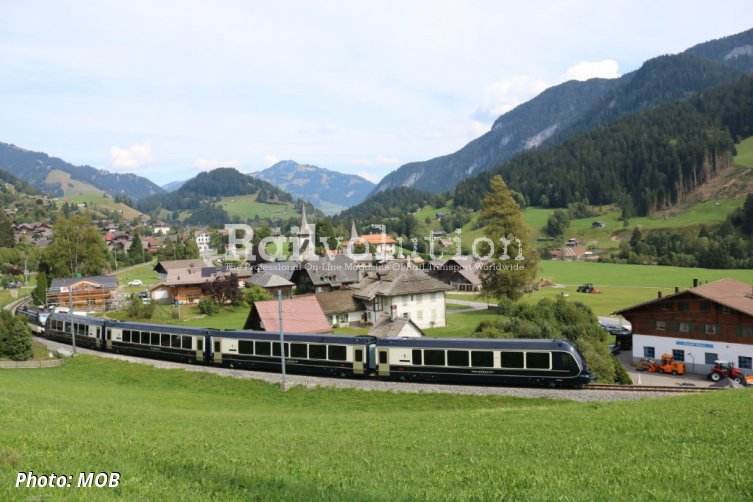 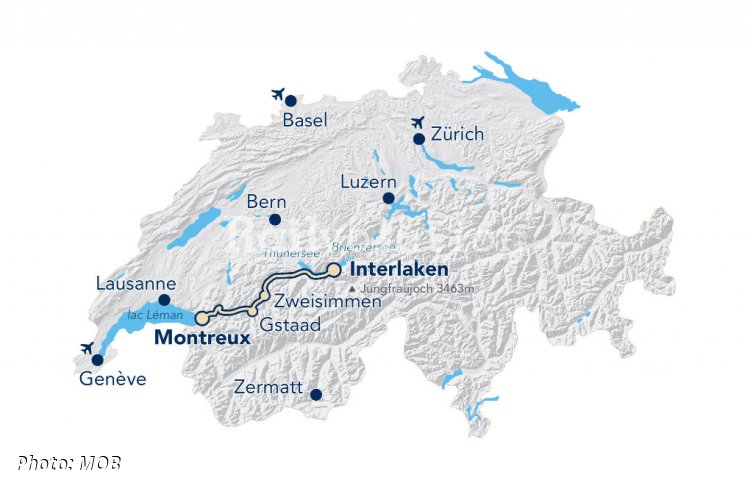 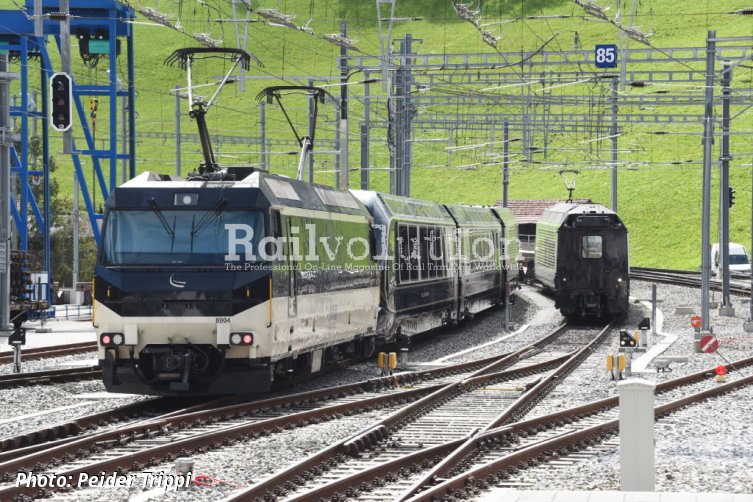 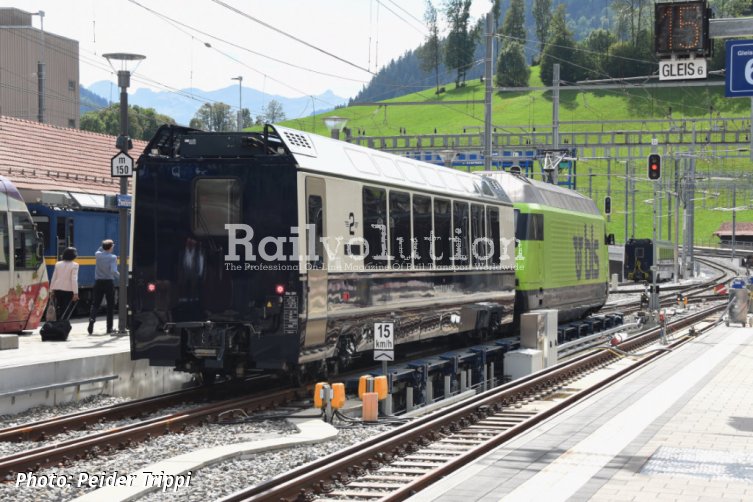 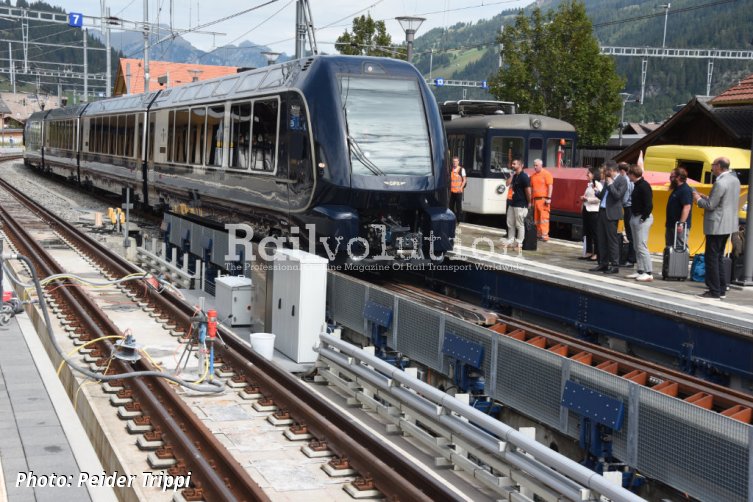 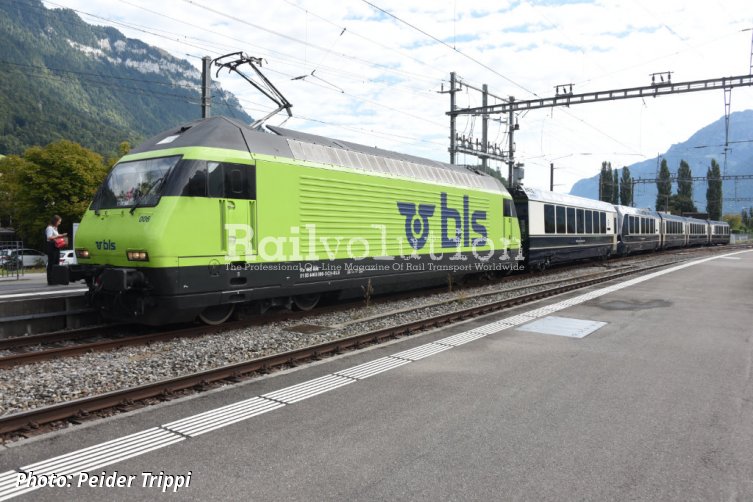 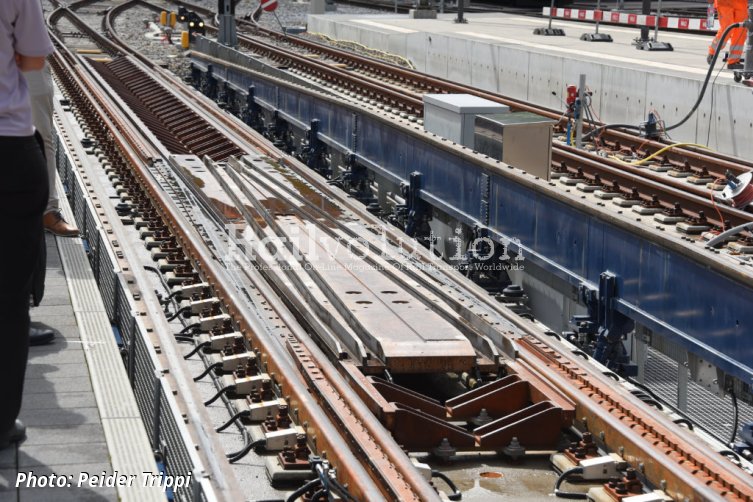 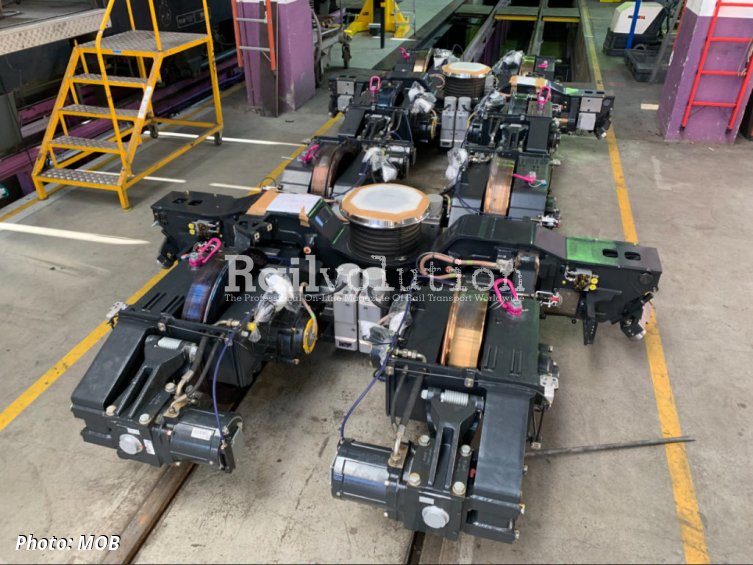 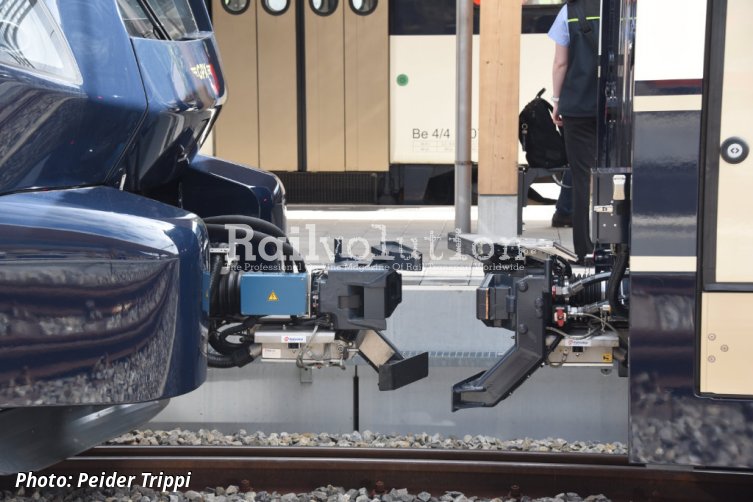 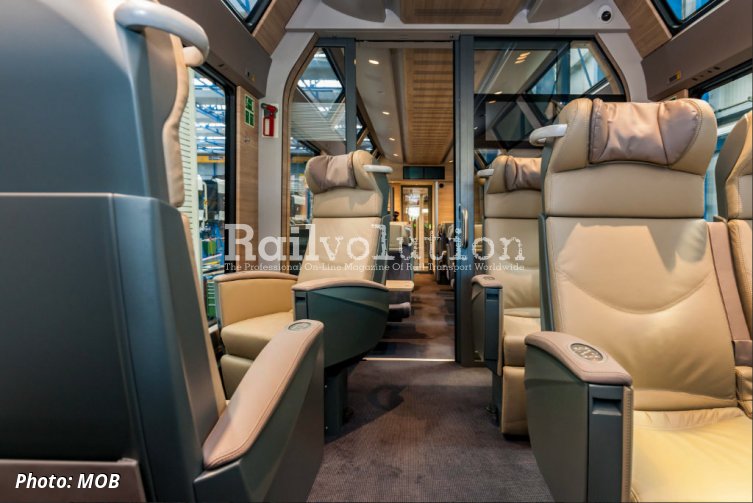 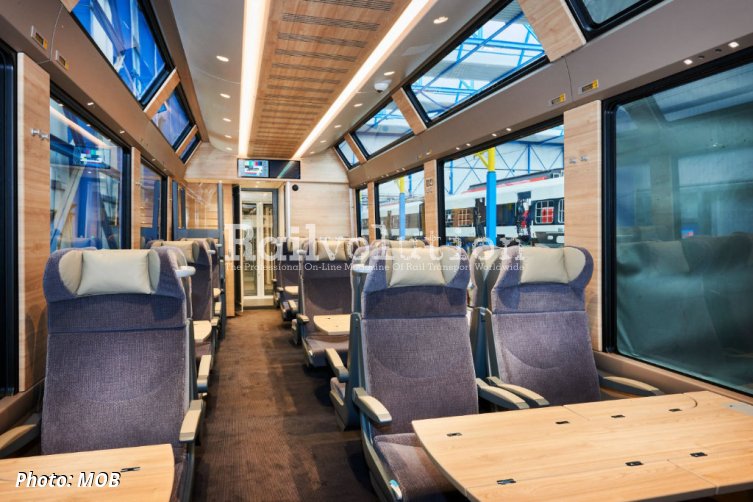 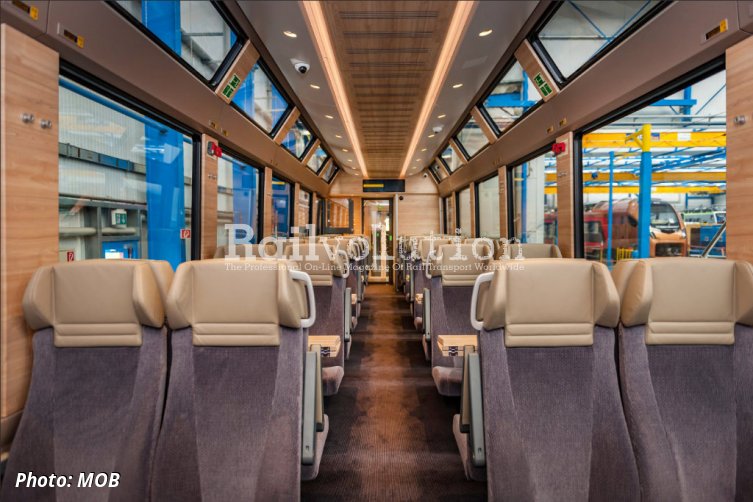 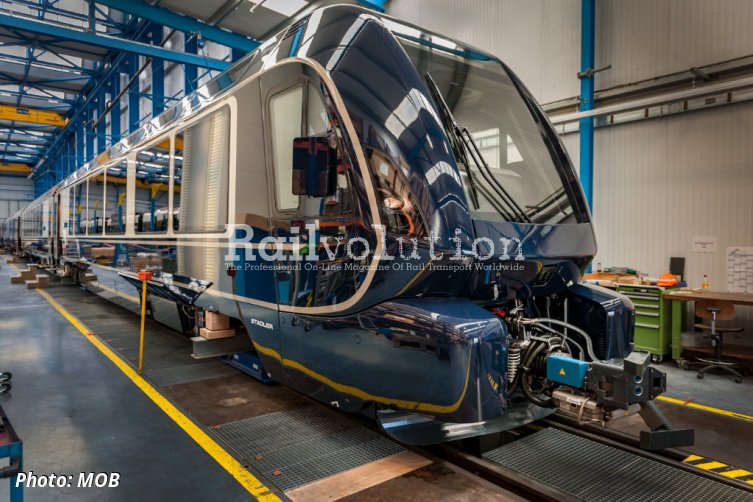 On 25 August, MOB announced that GoldenPass Express (GPX) direct trains are scheduled to start operating on 11 December 2022 on the 115 km Montreux - Zweisimmen - Interlaken Ost route, with 1,000 and 1,435 mm track gauges.

This will happen after a long period of preparation, as the project of direct "Expresses over the Golden Pass" in this form was launched by the MOB (Chemin de Fer Montreux Oberland Bernois) in 2008, with the original plan being to start operations in 2015. This was not the case for such a challenging project and, after further stages, it was planned to start operations in December of that year at the beginning of 2020, then postponed to the summer of 2021 because of the covide, and finally not until the end of this year.

The idea of linking Lake Geneva (Genfer See), the city of Gstaad and Lake Thun (Thunersee) and Lake Brienz (Brienzersee) at the northern foot of the Bernese Alps dates back to 1873 with the aim of building a railway between three important tourist regions. However, the line was eventually built as a narrow gauge on the Montreux-Zweisimmen section (62.4 km) and as standard gauge on the Zweisimmen-Interlaken section (52.9 km). In 1924, the GoldenPass association was founded and from the 1930s onwards, a three-rail line was envisaged on the Zweisimmen - Interlaken section belonging to the BLS.

This was not materialised and the solution chosen was to use passenger cars with bogies with the possibility of changing the track gauge and with a gauge changer installed in the Zweisimmen station. The cars are formed into a Non-powered Multiple Unit (NMU), where this application has a clear technical and operational justification, as:
- only the cars have variable gauge bogies and not the locomotives, which are changed on a daily basis due to the different track gauge,
- the locomotives are regularly coupled from both sides of the non-traction unit, which is for this purpose equipped with technically identical driving trailers  at both ends, from whose driver's cabs the trains are alternately controlled.

In January 2018, 20 fully equipped bodyshells were ordered from Stadler (later reduced to 19) and assembled at its Bussnang factory. Pininfarina was commissioned to design the end cars, while the interior and some exterior elements were designed by Innova Design of UK. Alstom was commissioned to develop and manufacture special bogies, of which a total of 58 (two bogeis per car plus spare bogies) were produced at the Villeneuve plant, located near Montreux.

To these non-powered units will be coupled the Bsi 291 - 293 second-class interface cars (length 18.9 m, dead weight 25.11 t) in Interlaken, which are designed for a 1,435 mm gauge only. The interface cars are necessary for mechanical coupling, as the couplings on the MOB vehicles are at a different height from the screw couplings and buffers on the BLS locomotive, and will also allow communication between the GPX rake and the Class Re 465 locomotive.

These interface cars are of the same (new) age and design as the GPX NMU, so they do not imply a quality drop in travel comfort for passengers - unlike the different (lower) comfort level of (older) external cars coupled to the non-powered units at other operators. In addition, the GPX interface car (linked by a screw  coupling to the Class Re 465 locomotive) is connected to the GoldenPass Express NMU by an automatic coupling with an electric and pneumatic head, which is a significant difference from the external cars coupled to non-powered units of other operators.

In December 2021, the original MOB order was further supplemented by the addition of the low-floor second-class Bs 271 - 274 cars (length 18.75 m, weight 25.3 t), which are to be delivered in late 2023 and early 2024 and will enable the barrier-free transport of passengers in accordance with the BehiG law on equality for people with disabilities (Behindertengleichstellungsgesetz). With the acquisition of the four additional vehicles, the total investment in the fleet has increased from 76 million CHF to 89 million CHF to the federal government and the cantons of Waadt, Bern and Freiburg are contributing.

When the Class Bs cars are delivered, they will be incorporated in the middle of the four-car NMUs to allow low-floor boarding and transport of persons with reduced mobility, and creating the five-car non-powered rakes.

The capacity of the train on a metre gauge in the first phase will be 145 passengers, of which 18 in Prestige class, 48 in 1st class and 79 in 2nd class. With the delivery of the low-floor Class Bs cars, the capacity will increase to 184 passengers, with 39 seats added in 2nd class.

On a standard gauge, the train will have 199 seats in the first phase, of which 18 in Prestige, 48 in First Class and 133 in Second Class (this difference is due to the presence of the Bsi interface car). Once the low-floor cars are delivered, capacity will increase to 238 seated passengers, with 172 seats available in 2nd class.

Due  to the high level of service, the new GoldenPass Express will be a product expected to attract significant interest from international clientele, but is not intended to override the existing MOB’s GoldenPass Belle Époque and GoldenPass Panoramic products. Travel time for GPX is 3 h 15 minutes and operation start will be gradual:
- between 11 December 2022 and 10 June 2023, only one pair of trains will run daily between Montreux and Interlaken (departures from the departure stations at 09.35 h and 09.08 h),
- from 11 June to 9 December 2023 will the number of trains increase to four pairs a day (departures from Montreux at 07.35, 09.35, 12.35 and 14.35 h, departures from Interlaken at 09.08, 11.08, 14.08 and 16.08 h). At this time, three trains per day are to be deployed here, while a fourth will be available as a back-up and for maintenance.

As GoldenPass Express also serves regional transport, tickets from the relevant Swiss fare systems are also accepted. The prices of the culinary offers will be defined at a later date.

As the owner of the GPX trains, MOB is responsible for the project and leases the standard-gauge vehicles on the Zweisimmen - Interlaken line from BLS. MOB and BLS are responsible for the correct planning and organisation of the GPX operation on their respective sections. On-board catering services are outsourced to a specialised external company, which is also the responsibility of MOB. The trains will be maintained by MOB's rolling stock division at its Montreux, Chernex and Zweisimmen workshops.

The type-approval for these new vehicles is currently still in progress and is being carried out by the MOB. The data is submitted to the Federal Office of Transport (BAV), which analyses it and issues an approval decision once all requirements have been met. The test phase runs from summer 2020 and is due to end this autumn. For now, the BAV has issued a preliminary permit for a test run without passengers.

Given that the role of GPX trains is also to better connect Montreux with Lucerne, on which route only one change of trains will be necessary from this December, the MOB also mentions the prospective possibility that the new gauge-changing technology could also eliminate a change of trains at Interlaken, if a gauge changer is installed there as well.

The same GoldenPass Express NMU could then run on three different lines: the metre-gauge Montreux - Zweisimmen (MOB), the standard-gauge Zweisimmen - Interlaken (BLS) and the metre-gauge, but with a rack, Interlaken - Luzern (Zentralbahn). For now, however, as MOB states, this is music of the future...