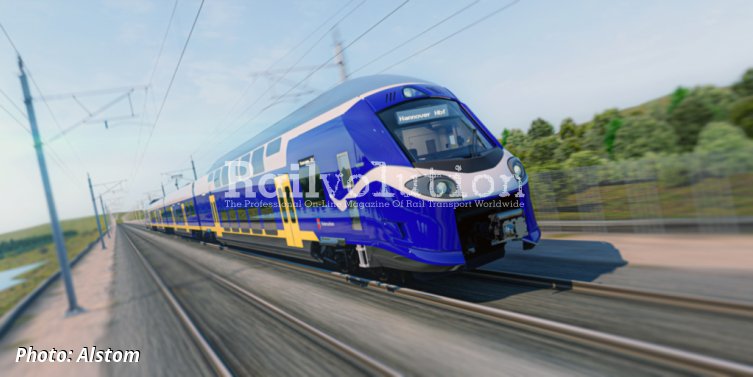 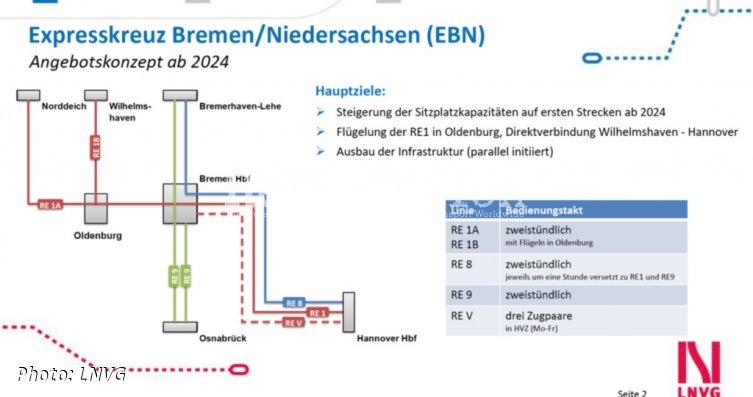 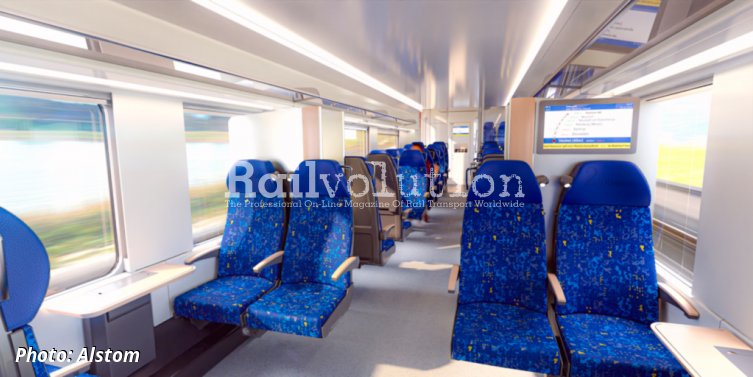 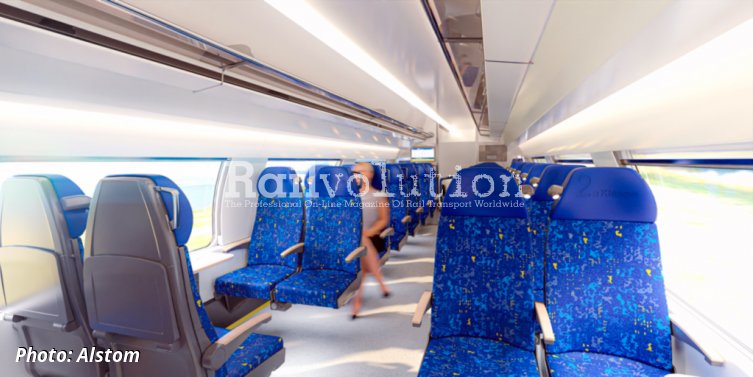 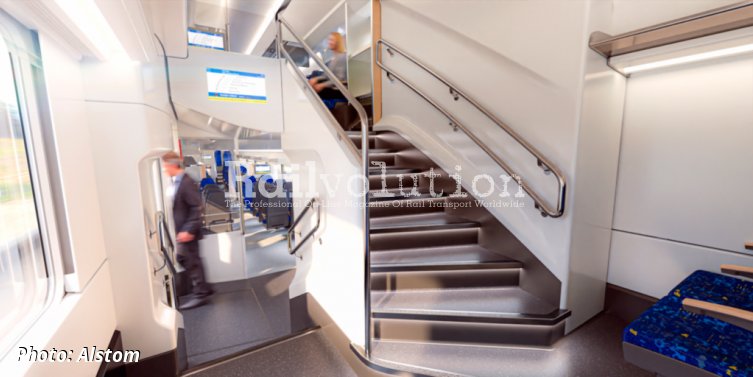 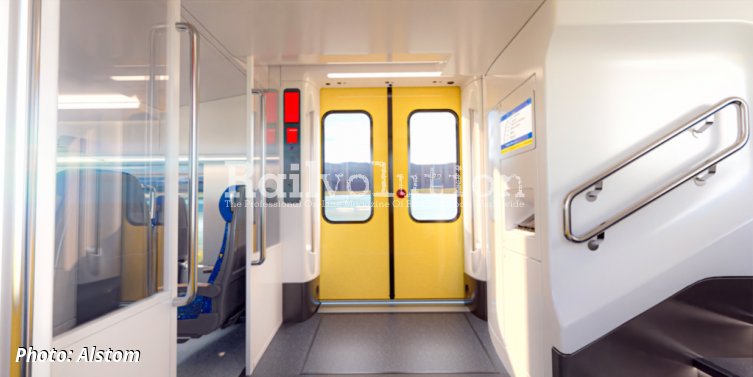 On 25 February 2021, the Niedersachsen Land announced that it had selected Alstom as the supplier of 34 double-deck Coradia Stream HC (High Capacity) EMUs. This was done through the LNVG vehicle pool, which plans their use on the Expresskreuz Bremen/Niedersachsen network (EBN; „Kreuz“ means „cross“), linking Bremen, Hannover, Oldenburg, Wilhelmshaven, Norddeich-Mole, Osnabrück and Bremerhaven. The operator of this group of services will result from the respective tender, which is planned to be invited this year.

The contract for the new EMUs was signed on 8 March, after none of the unsuccessful participants in the tender appealed within the 14-day appeal period. The contract has a total value of around 760 million EUR. Of this sum, 420 million EUR is for the trains and 340 million EUR for their maintenance, which will be provided by their manufacturer for 30 years. This will be carried out in a new depot, which will be built in Bremen at a cost of 40 million EUR and financed by LNVG (the sum is already included in the amount of 340 million EUR).

For Lower Saxony, this is the largest one-off order for new trains to date, sending a clear signal that the Land wants to further strengthen its rail transport. The new Coradia Stream HCs will be four-car units, consisting of two double-deck driving trailers and two non-powered intermediate single-deck cars, with a 2'2 '+ Bo'Bo' + Bo'Bo'+ 2'2' axle arrangement (i. e. the opposite concept than at the Desiro HC family from Siemens). They are to be put into service from the end of 2024 and will have a maximum speed of 160 km/h, a length of 104.6 m and 408 seats. Alstom did not provide more technical information stating „that it is too early yet“ and with reference to LNVG. The latter informed us that it is preparing brochures and would distribute them later.

In addition, 18 more intermediate cars will be ordered, which will allow these EMUs to be extended to six-car ones. A total of 154 cars (68 end cars and 86 intermediate cars) will be acquired, of which 25 four-car and 9 six-car units can be created. However, three- or five-car units may be formed if necessary. Coradia Stream HC EMUs will replace the DB Regio trains, which will be transferred to other lines.

Coradia Stream HC production will take place at Alstom Salzgitter works in Lower Saxony, which the Land Minister for Transport also considers to be an important element in securing employment in the region. LNVG states that the electricity consumption of the new EMUs, calculated at around 9 kWh/km when running in multiple (eight cars), will be significantly lower compared to that of push-pull rakes consisting of seven double-deck coaches and a Class 146 TRAXX electric locomotive, which is about 15 kWh/km.

The Coradia Stream HC EMU will be the first new-built vehicles in Germany to make full use of the interoperable, TSI compliant DE 3 loading gauge. This is made possible by new parameter calculations and network assessments at DB Netz. This will provide more space for passengers in the head and shoulders area on the upper deck, at around of 20 centimeters.

So far, the national DE 1 (for ICE) and DE 2 (for double-deck cars) loading gauges have been used. For the future, DB Netz and operators envisage that the DE 3 loading gauge will be introduced on a rising number of lines, this being prompted by the ex-WESTbahn KISSes bought by DB in 2019, and by the recent LNVG vehicle orders.

The EBN group of services will include from the 2025 timetable the RE 1 line from Hannover to Bremen and Oldenburg, where the trains running in multiple will be divided into the directions Norddeich Mole (RE 1A) and Wilhelmshaven (RE 1B), and the RE 8 Hannover - Bremen - Bremerhaven line. Both will run in a two-hour clock frequency, which will create an hour-clock timetable between Hanover and Bremen.

The situation will be similar between Bremen and Bremerhaven, where the RE 8 and the RE 9 line Osnabrück - Bremen - Bremerhaven will be interleaved, creating an hourly train frequency. Moreover, additional services connecting Hannover and Bremen will be introduced. This will launch the first EBN stage, for which 33 four-car EMUs will be available (one of the batch will initially be used by Alstom for on-board ETCS testing and approval). The four-car Coradia Stream HCs running in muliple will have a length of 209.2 m and 816 seats.

As the RE 1 line is in high demand between Hannover and Oldenburg, the second stage of EBN operation is expected to be launched from 2028 using extended six-car Coradia Stream HCs. The ten-car sets running in multiple will be 263 m long and will offer 1,050 seats. This is also related to the infrastructure upgrade, which includes, among other things, the platform extension or modifications of signal positions, but above all the completion of electrification and double-tracking of the Oldenburg - Wilhelmshaven stretch of line, which is scheduled to be completed by 2028.

For the new depot in Bremen, which will be built by Alstom, the company chose the Reitbrake district in the northwest of the city. The depot will use state-of-the-art technologies, especially with regard to environmental protection and energy efficiency. In addition, LNVG has set particularly stringent noise protection requirements, so that noisy work can only take place in the halls, the shunting will not be carried out by a diesel locomotive but by an electrically driven shunting device, and the trackwork should be constructed so to avoid howling of the trains when moved through curves and switches.

In 1997, Niedersachsen established the Hannover-based LNVG (Landesnahverkehrsgesellschaft Niedersachsen, Lower Saxony Regional Transport Association). It now owns 385 vehicles, to which will be added the 34 new Coradia Stream double-deck EMUs and also 14 iLint HMUs (for the number 385 it is necessary to specify that this stands not for complete trains, but that it includes the Bombardier-built double-deck coaches, which are counted individually).

LNVG then provides its vehicles to operators arising from the tenders. With the investment volume of around 1 billion EUR (not yet including the Coradia Stream HC fleet), LNVG is the largest vehicle pool among the German Länder.