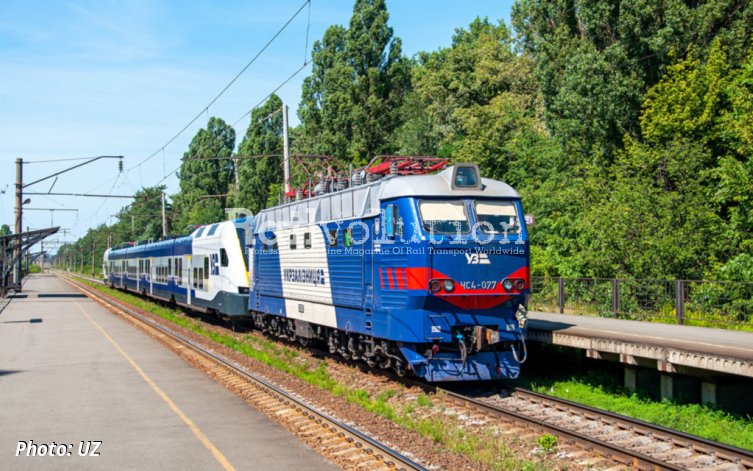 Stadler is developing its activities on the 1,520 mm gauge. In February 2021, the company’s representatives visited the UZ’s electric vehicle repair works in Kiev and several other facilities to see the possibilities of local production. Then on 7 May 2021, Stadler, the Ukrainian government and Ukrzaliznytsia have signed a non-binding MoU regarding the development of the railways in Ukraine. Both companies have agreed to further explore a possible cooperation regarding the manufacturing and supply of modern vehicles with local value added in Ukraine. This involves modern EMUs for UZ as well as trams and metro trains for Kiev.

Subsequently, on 14 August a FLIRT in UZ colours and with the respective logos entered Ukraine from Belarus. Manufactured at the Stadler Minsk works, it is designated EPMII-005 and is one of the ten five-car FLIRT G (GOST) EMU ordered by Belarusskaya Chygunka in January 2019 as a follow-up batch to the two long-distance seven-car Class EPM units that have been deployed on the Minsk - Gomel route since August 2016.

This 160 km/h FLIRT was temporarily stationed at the Darnitsya depot in eastern Kyiv, which belongs to UZShK (Ukrainska zaliznychna shvidkisna kompania, UZ's Rapid passenger transport subsidiary). EPMII-005 will stay in Ukraine until mid-September for trials on suburban lines around Kiev. It will then return to Stadler Minsk to be returned to the BCh standards and following a takeover by the operator it will be dislocated to the Minsk-Severny depot, like the other EMUs of this class. The type approval for Class EPMII was awarded in June 2021.

FLIRT test runs in Ukraine began on 15 August on the Darnitsya - Kiev Passazhyrsky line, and are taking place as part of the government's City Express programme, which, as an equivalent to the S-Bahn system, was announced earlier this year and aims to strengthen the suburban network of the capital, Kharkiv and Dnipro, and possibly other cities (Kharkiv plans to set up its own suburban company).

At least 20 EMUs for City Express in Kyiv are to be ordered as early as 2022. Their financing is to be provided from the state budget and from loans offered by potential manufacturers. According to UZ, the preparation of technical requirements for the new trains is already underway and an international tender should be announced by the end of September.

On 26 August 2021, EPMII-005 was presented to the recently appointed new UZ director Oleksandr Kamyshin in the presence of Peter Spuhler (Stadler’s Executive Chairman and Group CEO ad interim). On the same day, a meeting between representatives of the Ministry of Infrastructure of Ukraine, UZ, Stadler Rail, Stadler CIS and SERV (Swiss export risk insurance agency) took place at the office of the President of Ukraine.

It resulted in a MoU in which the parties have agreed to continue to pursue financing for the manufacture and supply of modern rail vehicles with local value added in Ukraine. The project envisages the purchase of 60 new EMUs for the City Express project (30 for Kiev and 30 for Kharkiv and Dnipro) and the renewal of the UZ interregional fleet (20 regional and 10 long-distance EMUs).

In addition (not subject of the aforementioned negotiations), UZ also plans to purchase over 500 new long-distance passenger coaches and is also preparing projects to upgrade lines for speeds of 160 - 200 km/h.