Testing Of The GTW 2/6 EMUs In Vysoké Tatry Continues 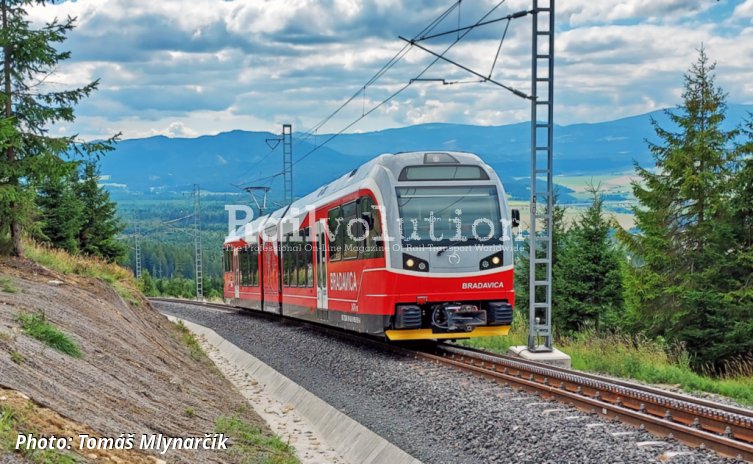 As we mentioned here, all five new 1,000 mm gauge Type GTW 2/6 EMUs for ZSSK are now in the Vysoké Tatry (High Tatras). Three of them, 495.952, 953 and 954, have already performed technical acceptance test runs on the adhesion line, as well as did the dual-power multifunctional locomotive 485.951.

After the tests on the adhesion network (TEŽ, Tatranské elektrické železnice, Tatra electric railways), the testing phase on the rack and pinion track between Štrbské Pleso and Štrba (OŽ, Ozubnicová železnica, Rack railway) started on 2 August 2021. These took place for the first week first only at Štrbské Pleso station and then also on the line to Štrba (4.7 km), which was temporarily released only for test runs, as its modernisation is still not completed (among other things, static measurements on bridges still need to be carried out).

The first run „down“ took place on 9 August and was attended by representatives of ZSSK, Stadler and Strabag, where the latter is the contractor for the modernisation of the OŽ line. For safety reasons, the speed of the train was limited to only 2 km/h, as this was the first run of the new vehicle on a 150 ‰ gradient. 495.951 was used in this first phase.

As an interesting fact about the capabilities of the new technology, the GTW was able to brake only with the electrodynamic regenerative brake even at a speed of only 2 km/h, using only 60 - 70 % of its 900 kW braking power when running on a gradient of 150 ‰. Runs on the rack and pinion line now also involve the 495.955 EMU.

With the described tests on the OŽ, the tests of the new GTW 2/6 on the TEŽ lines have therefore stopped for the time being, as the Class 495.95 is waiting for the approval of the Slovak railway authority DÚ (Dopravný úrad) and also for the completion of the reconstruction of the rack line, which started last July and has been delayed; ŽSR is yet to inform about the exact date of completion. Also locomotive 485.951 is not currently undergoing test runs, as its power supply is being modified to enable it to feed the existing ZSSK’s snow blower.