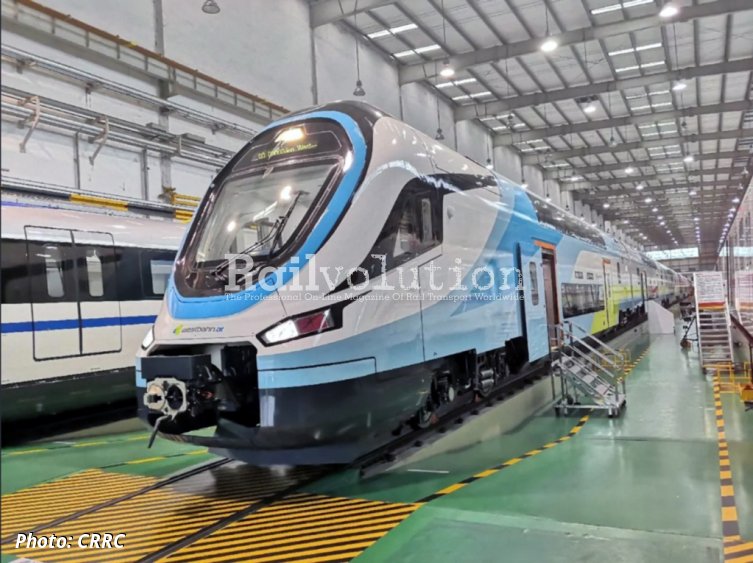 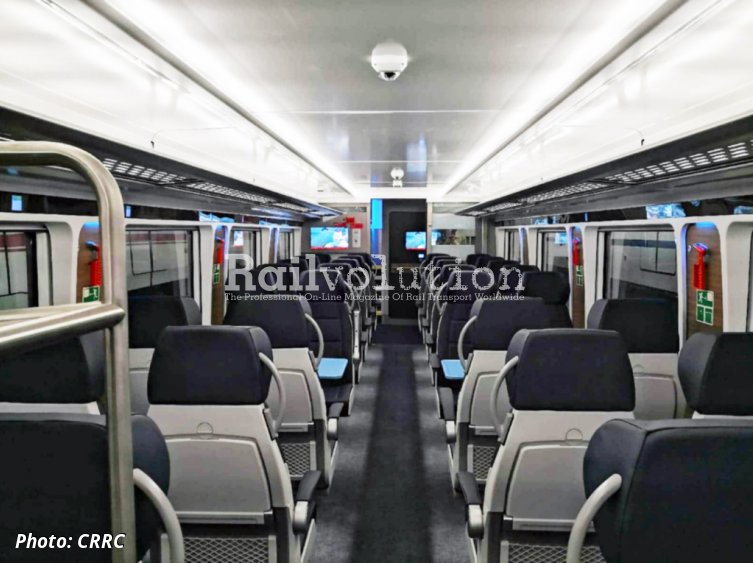 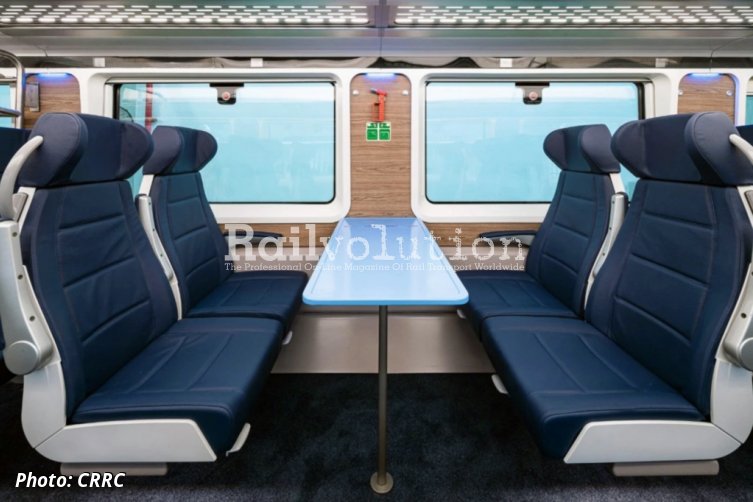 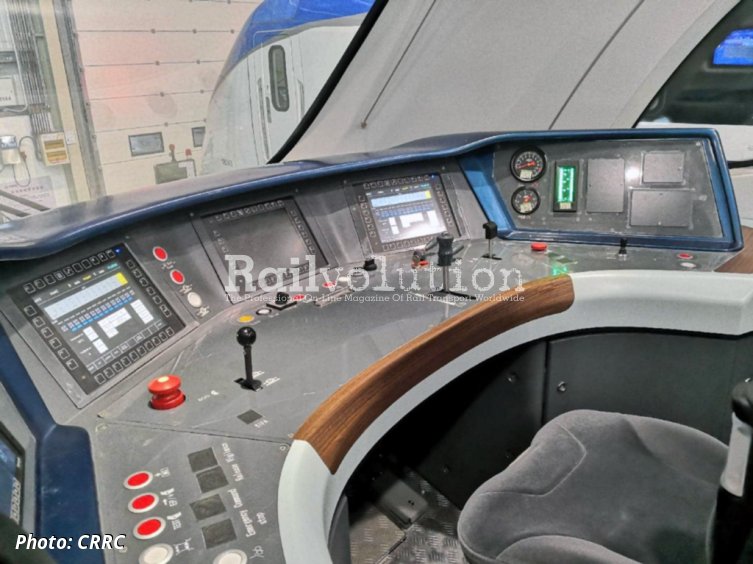 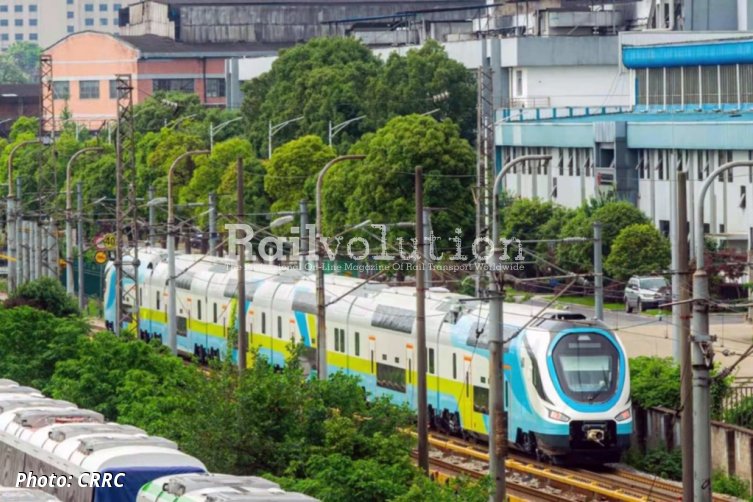 At the end of May, a big celebration was held at the CRRC Zhuzhou works. Let's quote from the manufacturer's press release: „On 31 May 2021, the first double-deck EMU for export to Europe was unveiled on the order of Sun Yongcai, Secretary of the Communist Party Committee, Chairman of the Board of Directors and General Manager of China CNR.

Eric Foster, WESTbahn Management CEO, Christian Kahn, Chairman of the Board of Directors of the Austria-China Chamber of Commerce, and Li Xiaoyi, Chinese Ambassador to Austria, also attended on behalf of the customer via video link from Wien.“

The object of interest are the four six-car units with a maximum speed of 200 km/h and traction equipment for 25 kV 50 Hz and 15 kV 16.7 Hz, ordered by WESTbahn in December 2019. This was not long after the 15 KISS EMUs were ordered following a „duel“ between CRRC and Stadler, with the order announced on 29 October 2019.

However, as the Chinese manufacturer reports, negotiations with WESTbahn have not been interrupted and have resulted in a contract for similar trainsets of 150 m in length. The manufacturer therefore developed and built them within 18 months and they can be four- to eight-car units. A selection of names from the guests at the ceremony speaks about the other participants in the WESTbahn project: Li Xuefeng, Deputy Director General of the China Railway Research Institute, Nie Ziqiang, General Manager of CNR Zhuzhou Electric Company, Han Zhujun, President and CEO of Knorr-Bremse China, and Hu Zhijun, Chairman of CNR Zhuzhou Investment Holding.

The units, known as DEMU2, are designed according to TSI requirements, have 571 seats and, when counting the standees capacity (709), would reach a total capacity of 1,280 passengers if used. They are equipped with first and second class seats, refreshment vending machines, coffee machines, wheelchair and bicycle spaces. In addition to interior air conditioning, they are also equipped with heated floors, and the entrance doors are 1,400 mm wide.

The bodyshells are made of aluminium alloy profiles. CRRC says the units have only a 10 % increase in weight compared to an adequate single-deck train because of their lightweight construction with a large number of components using lightweight and high-strength carbon and fibreglass as well as other new composite materials. CRRC already has plenty of experience with these, as demonstrated at InnoTrans 2018 by the CETROVO metro car, which had not only the bodyshells made of carbon fibre, but also the bogie frames (which are 40 % lighter than the steel ones), the cab ends or the electric equipment cabinets.

At this point, let us once again quote from the above-mentioned CRRC press release: „On the occasion of the 100th anniversary of the founding of the Communist Party of China, the China Central Television and Radio Corporation (CCTV) has launched a major special programme, China Today. On 1 June, China Today - Hunan featured an eight-minute report on the industrial cluster of railway companies in Hunan province.“

Sun Yongcai also said that „this year marks the 50th anniversary of the establishment of diplomatic relations between China and Austria, as well as the 140th anniversary of the founding of CNR. The latter will fully support broader and deeper cooperation with Austrian customers and contribute CNR's products, technologies, solutions and wisdom to the development of European railways.“

Eric Foster expressed that he „can't wait to welcome the new train to Europe and is confident that the project developed by CNR will deliver technical innovation and a high quality experience, and looks forward to further friendly and collaborative partnerships. (...) We have developed this train together with CRRC and have taken great care to ensure that major components such as doors and couplings are of European origin.“

The Austrian Consulate General, Commercial Consul and Acting Head of Mission Mr. Moue, sent a congratulatory message: „This year is the 50th anniversary of the establishment of diplomatic relations between Austria and China, we are happy for this path of economic cooperation between Austria and China, and hope that China CNR and Austrian companies will go further and further on the path of cooperation.“

The first of these trains is expected to arrive in Europe in late summer and will be tested at the VUZ Velim test centre. The DEMU2s will be provided to WESTbahn by way of a lease, which will commence once the vehicles are approved for service; this is expected to happen in the summer or autumn of 2023, according to CRRC.

The trains are expected to be capable of operating in five countries, three of which are Austria, Germany and Hungary. Given that operation to Switzerland was never planned by WESTbahn, and given that the DEMU2s are also equipped for 25 kV 50 Hz, it can be assumed that the other two countries could be the Czech Republic and Slovakia, as more distant countries are not even much of an option for various reasons.

In total, WESTbahn wants to end up with 19 six-car EMUs, more than the original 17 ones (nine six-car and eight four-car KISS 1 and 2 EMUs) that were sold to DB in 2019, which was WESTbahn's solution to its financial problems at the time. In their place, 15 new six-car KISS 3 EMUs have been ordered and deliveries have already begun; they are also being provided on lease so that payments are phased in.

One of the CRRC managers commented that the WESTbahn order, while not large, is certainly prestigious: „We are not aiming for large numbers, that is complicated with government contracts in Europe, but we are betting on a policy of small steps. ‘First the chickens have to be raised, then the eggs are laid’," he explains in metaphorical way.