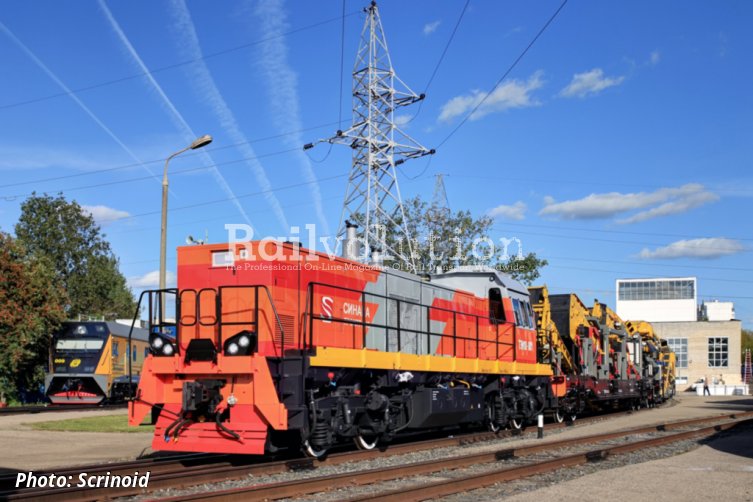 On 29 June 2021, STM signed a contract to supply five Class TEM10 diesel shunters to the Magnitogorsky metallurgichesky kombinat (MMK, Magnitogorsk iron and steel works). The locomotives, TEM10-004 to 008, are scheduled for delivery in September and October 2021, and as an optional feature they will be fitted with CCTV with five cameras, and with a wheel flange lubrication system.

This is a significant order for these new diesel shunters produced by LTZ of Lyudinovo. The prototype TEM10-001 was built in 2019 and in September 2020 it was awarded the TR TS 001/2011 certification by RS FZhT. In December 2020 it was bought by NLMK (Novolipetsky metallurgichesky kombinat, Novolipetsky metallurgical plant) of Lipetsk, north of Voronezh.

TEM10-002 was finished in February 2021 and TEM10-003 followed in March, both being used since April by TMK (Trubnaya metallurgicheskaya kompania, Pipe metallurgical company): 002 is in service at Seversky trubny zavod (STZ, Seversky pipe plant) of Polevskoy, southwest of Yekaterinburg, and 003 at Volzhsky trubny zavod (VTZ, Volzhsky pipe plant) of Volzhsky, which is the northeast suburb of Volgograd.

While TEM10-001 was bought directly by NLMK, both TEM10-002 and 003 are rented by STZ and VTZ from SinaraPromTrans, which is a Sinara subsidiary focused on providing locomotives and their maintenance, and transport services.

The Class TEM10 dieselelectric locomotive has a modular design, a Bo‘Bo’ axle arrangement, and the two Type TAD1651-VE-B Volvo Penta diesel engines, each having a 856 kW power, which meet the EU Stage III emission standard. In operation, mainly one engine is used, the second one turns on only when the load increases. The 100 km/h locomotive has an AC/DC power transmission, a starting tractive effort of 291 kN and a continuous tractive effort of 216 kN.

Its length over couplings is 17,140 mm, its width 3,112 mm, its weight in working order 90 t, an axle-load of 22.5 t and a minimum curve radius negotiable of 40 m. The fuel tank has a volume of 4,600 kg, around 3,800 litres (on account of severe climate conditions in Russia the volume is often specified in kilograms, not in litres, as liquids can change its amount when it is extremely cold).

The newest Type MPSUiD (Mikroprotsesornaya sistema upravleniya i diagnostiki, Microprocessor-based control and diagnostic system), manufactured by NPO SAUT of Yekaterinburg, is fitted. It includes a working algorithm adapted to controlling two diesel gensets and it monitors over 3,000 operational parameters of the locomotive equipment. In addition, this is the first control system based on Russian microcontrollers. The locomotive is also equipped with a screw compressor with a capacity of 5.25 m³/min. All auxiliary drives are powered by asynchronous motors, fed by static converters.