First Years Of SALis In Service 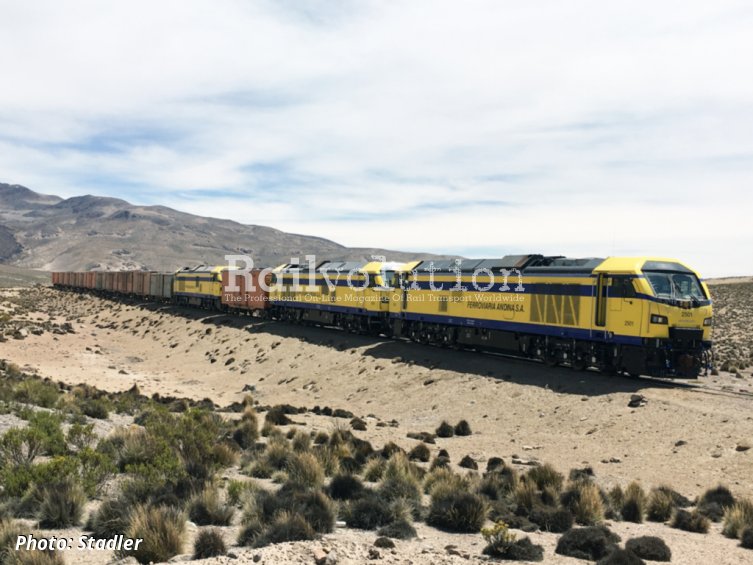 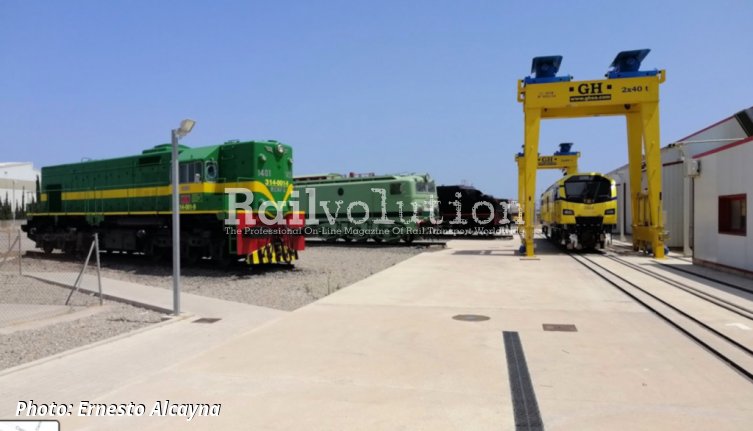 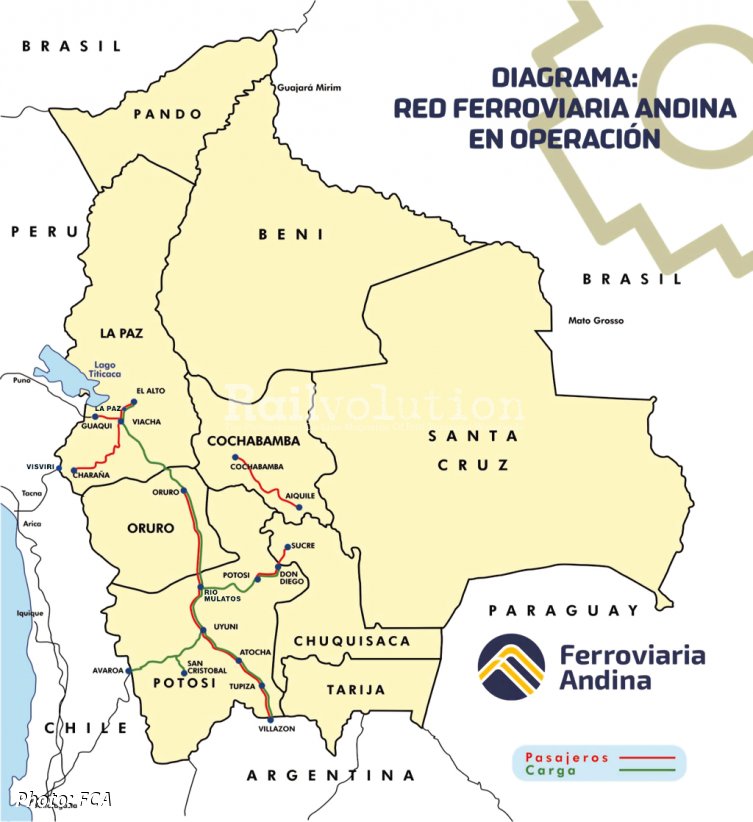 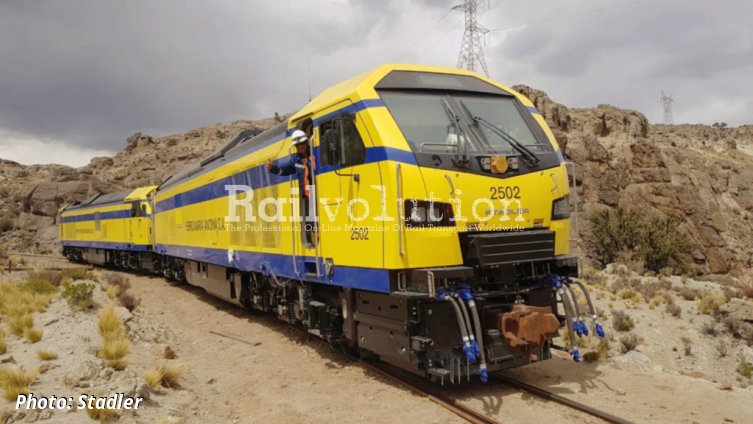 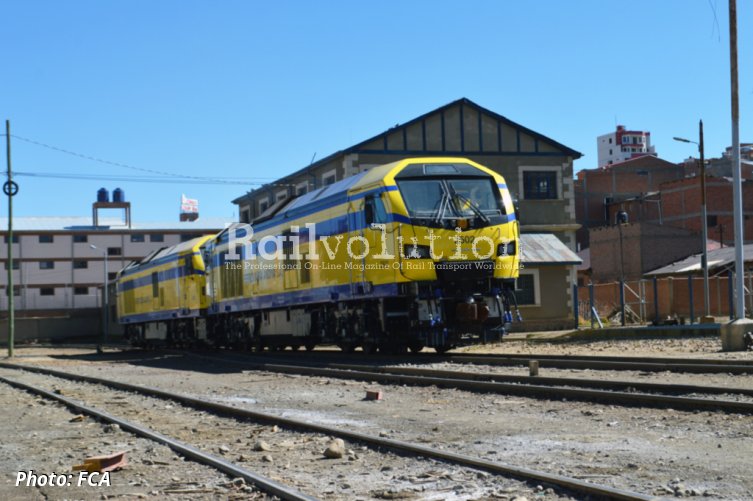 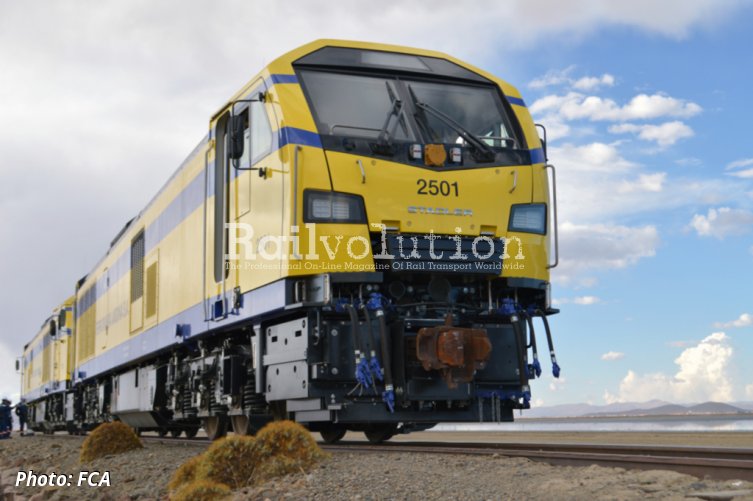 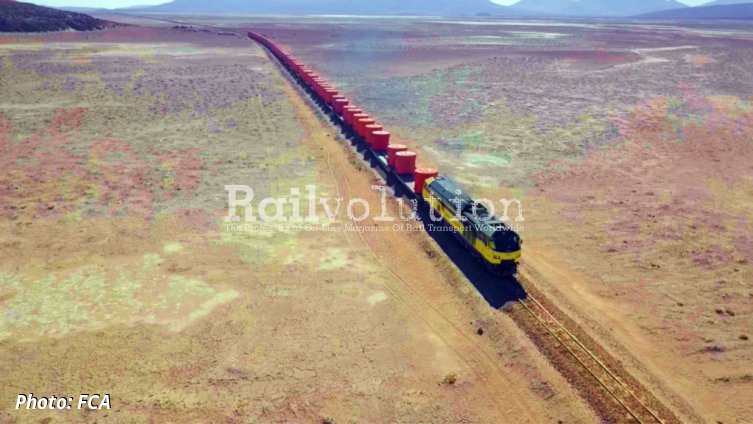 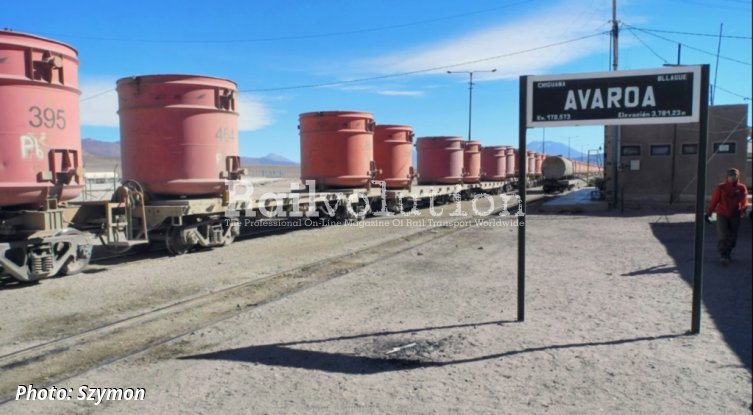 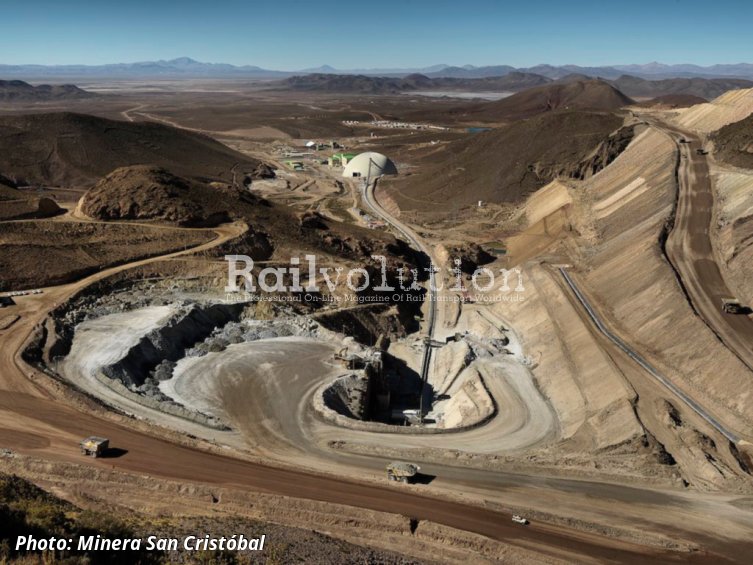 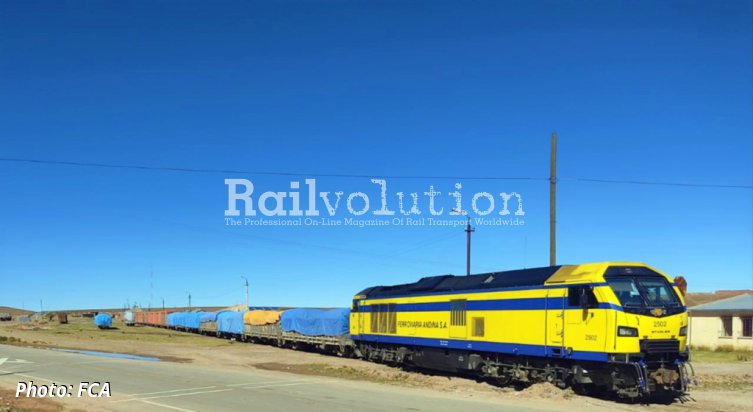 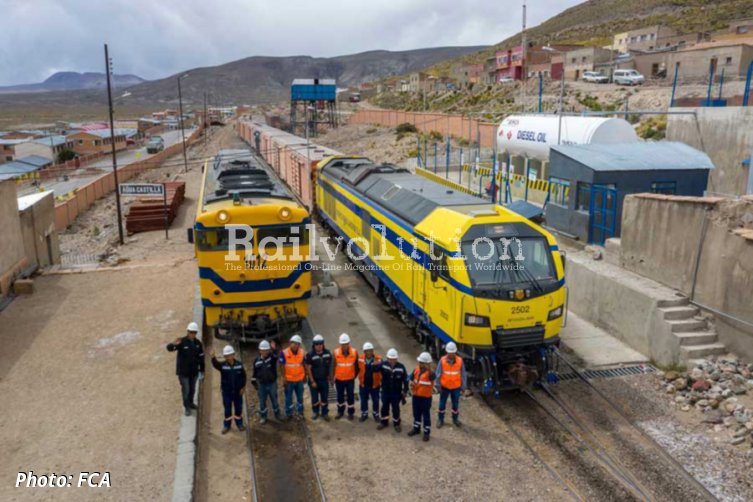 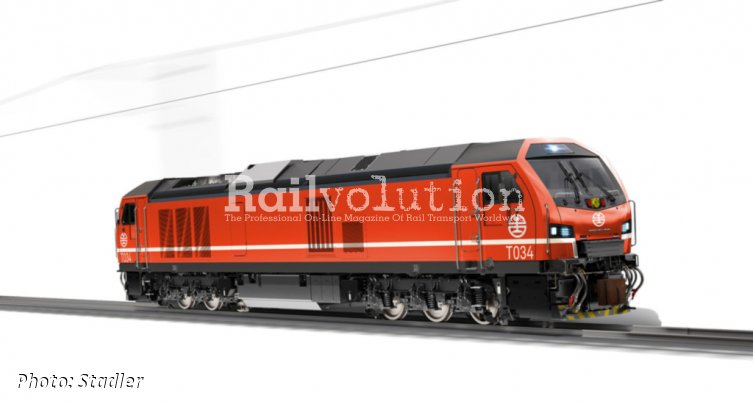 Initial testing and commissioning took place at Albuixech, and subsequently the locomotives were despatched from Bilbao to the client. Designated 2501 to 2503, they reached Antofagasta in Chile by sea on 8 September 2019, and were railed on the quayside.

They arrived in Bolivia on 26 September and were subsequently based at Uyuni, around 3,700 m above sea level, in southwestern Bolivia, which lies on the largest salt plain in the world (Salar de Uyuni, over 10,000 m2). Subsequently, test runs were started between Río Mulato and Agua Castilla to the northeast of Uyuni, where the line in the Andes reaches heights of up to 4,786 m above sea level.

Since November 2019 they are in regular service and became the first new locomotives on the FCA network (and its predecessor) in more than 40 years, as the last new-built locomotives came in 1970s from the Mitsubishi-Hitachi consortium. At present, FCA operates 15 Type BFA-32M Bo’Bo’Bo’ locomotives of Series 900 and 1000, thus its fleet reached 18 locomotives.

The FCA’s SALis are powered by a 1,865 kW Cummins QSK60 diesel engine, have asynchronous traction motors and two Type BORDLINE CC1500 IGBT traction converters supplied by ABB. Top design speed is 100 km/h, although the rail infrastructure in Bolivia will limit the locomotives to a 60 km/h maximum. Starting tractive effort is 415 kN.

The locomotives have monocoque steel bodyshells conforming with Association of American Railroads (AAR) design standards, and AAR automatic couplings. The driver's cabs, linked by a passage through the machinery space, are hermetically sealed, and fully air conditioned, to provide a comfortable working environment in the climatic and altitude extremes at which the locomotives will be used. A 6,000-litre fuel tank is fitted. Weighing 96 t in working order, the SALi locomotives have an axle-load of 16 t. The locomotive can be ballasted up to 108 t in order to increase the axle-load up to 18 t and improve traction characteristics.

Their regular route is from the Minera San Cristóbal’s silver, lead and zinc mine near San Cristóbal in Potosí Department to Avaroa on the border between Bolivia and Chile. The Minera San Cristóbal is the world’s six largest zinc or and third largest silver producer. While San Cristóbal is at an altitude of 3,775 m, the locomotives are designed for use in altitudes up to 5,000 m, though the highest location on the Bolivian rail network is at Cóndor station, 4,786 m, on the line between Río Mulato and Potosí. The SALi locomotives are also used on the main line between Oruro and Uyuni, and they operate at the moment only in Bolivia.

They have proven themselves well in operation and, according to the FCA, have increased the company’s annual transport capacity by more than 30 %. In 2020, the three locomotives reached a total mileage of 182,966 km. There was a negative impact of COVID-19, as FCA stopped operating of these locomotives between April and May 2020.

At present, each SALi achieves monthly an average mileage around 6,400 km, while at the old Mitsubishi-Hitachi locomotives it is around 4,900 km monthly, and none of the old locomotives have been withdrawn from the regular service.

Empresa Ferroviaria Andina was founded in November 1995 and is based in La Paz, one of the two capitals of Bolivia (La Paz is the seat of executive and legislative power, the other capital is Sucre, the seat of constitutional and judicial power). FCA was one of the two companies that took over various parts of the railway in Bolivia after the collapse of ENFE (Empresa Nacional de Ferrocarriles del Estado, National State Railways Company) in 1996. So this year FCA celebrates its 25th anniversary.

The second successor after ENFE is Empresa Ferroviaria Oriental (FO). The railway infrastructure is still owned by the State.

In recent years, especially since 2015, FCA has ceased to be just a railway transport company, but now it focuses on integrated logistics services, which has made it a significant element of Bolivian exports and imports. Since 2015, the most important task was to reverse the economic situation in FCA, which in 2013 - 15 recorded losses due to declining revenues and rising spending.

The FCA now operates 1,834 km of metre-gauge lines in the western part of the country, connecting the departments of La Paz, Oruro, Cochabamba, Potosí and Sucre. Internationally it connects Bolivia with Chile (the ports of Mejillones and Antofagasta), Argentina (the city of La Quiaca) and Peru (the city of Puno on Lake Titicaca). Its main activity is freight transport, but it also operates (modest) passenger transport and tourist trains.

The main goods transported are mineral concentrates and borates (a large group of minerals that serve as a source of boron and are also used in the chemical and food industries, as fertilizer, etc.). The third most important are the products of the cement industry. And there are also foods such as flour, wheat, barley, malt, rice, bananas, soy flour and more.

In freight transport, FCA wants to play an important role in creating the CFBI, the proposed Corredor Ferroviario Bioceánico Central, envisaged as linking the port of Ilo in Peru with Santos, near São Paulo, in Brazil. Data released in 2018 indicated that this 3,865 km line would generate around 10 million tonnes of freight annually. 450 km of the line will be within Peru, with over 180 bridges and around 40 km of tunnels. 1,521 km of route will lie within Bolivia, and 1,894 in Brazil. 20 % of the route will be entirely new, the remaining 80 % will involve the restoration of railways which have been out of use for several years.

For this purpose, too, FCA acquired three SALi locomotives worth 16 million USD. The operator states that for the moment it is not going to confirm the option due to the global economics problems, even more when the new Bolivian government has stopped the CFBI project.

FCA currently transports goods representing 35 % of Bolivia's GDP with comprehensive logistics services. Its transport capacity is 1.5 million tons annually, using more than 140 stations, of which 11 are most important ones. At present FCA uses 18 locomotives and 723 wagons.

At present, the expansion of traffic is planned, on the Arica - La Paz route, where a freight train passed again after 16 years. It happened on 11 May 2021 and it was a train that moved 430 tons of steel coils from the Chilean port of Arica to Ferrotodo of Santa Cruz and 416 tons of soybeans in the opposite direction.

It was a test run to check this route, which ceased to be used in 2005. The FCA locomotive 1015 was used in Bolivia, which was replaced on the border by two repowered Fcalp locomotives, which hauled the train between Arica and Visviri. The total turnaround time was 12 days.

The reactivation of this line is the result of two years of negotiations between the FCA and Fcalp (Ferrocarril de Arica a La Paz) and EPA (Empresa Portuaria Arica, Arica port manager). If the test train prove successful, it will bring a significant improvement in the conditions of Bolivia's export logistics.

We would like to thank the FCA for its support in writing this article.

SALi On The Market

With SALi family, Stadler wants to open up a market opportunity on the South American continent with many important narrow gauge networks and a large fleet of obsolete locomotives. Nevertheless the second contract came from Asia.

On 15 October 2019 Stadler announced that it had been awarded a contract by the Taiwan Railways Administration (TRA) worth around 165 million EUR for 34 mixed-traffic diesel locomotives. TRA is responsible for managing, maintaining, and running passenger and freight rail services on the Taiwanese 1,097 km rail network.

The locomotives will be 1,067 mm gauge Co'Co' machines, capable of a top service speed of 120 km/h, and will be 20,000 mm long, 2,852 mm wide and 3,900 mm high above rail top. They will be equipped with 2,014 kW Cummins QSK60 prime movers. The electric transmission will have traction alternators, IGBT traction converters and six nose-suspended asynchronous traction motors. Starting tractive effort will be 430 kN, and up to three locomotives will be able to operate in multiple.

They will be specially designed for working in the Taiwanese tropical and subtropical climate, where humidity often reaches 100 %, and where temperatures can occasionally top 45 °C. Construction will take place at Stadler's Albuixech works in València with the first four locomotives initially expected to be delivered within 30 months after signing the contract, i. e. until April 2022. Now, it is envisaged that the first four SALis will be delivered to TRA sometime in 2022.

For Stadler the contract represented the first major locomotive order in Southeast Asia and also the second major success for the company in Asia within a short time. On 20 September 2019 Stadler established a joint venture with the Indonesian rail vehicle manufacturer PT Inka (PT stands for Perseroan Terbatas, a limited liability company in Indonesia) with the objective of building 500 carriages for suburban trains, with an option for 500 more.

These are to be used by Kereta Commuter Indonesia, a subsidiary of the Indonesian national railway company Kereta Api Indonesia, on suburban services in Jakarta. Construction - all assembling, fitting-out and commissioning - is to take place at a new factory now being built in Banyuwangi, at the eastern end of East Java, starting in 2021.

Stadler stated on 18 June 2021 to this contract: „Stadler and the Indonesian rail vehicle manufacturer PT Inka signed a joint venture contract in September 2019. Part of the contractual conditions is an order for 250 suburban carriages cars with an option for a further 250 carriages. However, the order has been delayed due to the ongoing pandemic.“

Another new family member is the SALi Dual with the same principal parameters like the SALi locomotive, but capable to run in electric (1.5 kV DC from catenary) mode and diesel mode. Five of such 1,000 mm gauge locomotives were ordered by FGC (Ferrocarrils de la Generalitat de Catalunya) in December 2019, the contract worth being 29.9 million EUR and including spare parts. They are expected to enter freight service in mid-2022.