ICNG On Test In The Netherlands 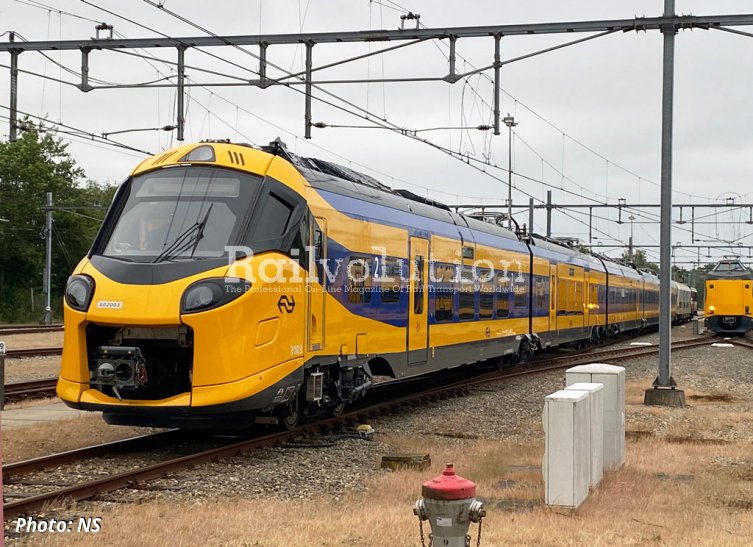 On 23 May 2020 a five-car dual-voltage ICNG 3108 arrived as a first NS Coradia Stream EMU in the Netherlands, being sent from the Alstom Chorzów factory. This EMU is being used by NS for training of maintenance crew and is located at Amsterdam Watergraafsmeer depot. It will stay there until all trainings will be finished. Subsequently it will return to Chorzów for further fitting.

Then, on 4 June 2020, a second five-car dual-voltage ICNG 3103 passed the Dutch-German border at Oldenzaal and arrived in the Netherlands, being sent from the Alstom Chorzów factory. This train is destined for test runs on the Dutch network, realised by Alstom, ProRail und NS, and was located at Onnen station in the north of the country, as shown in the photo. In the first phase it did some test runs in the Onnen area and a week later it was relocated to Utrecht for test runs on the HSL between Schiphol and Breda. In the beginning of this program phase these test runs will be realised at night.

Initially, deliveries of the 200 km/h EMUs were scheduled to start in January 2020, with entering service in 2021. The scheduled start of deliveries by Alstom was delayed even prior COVID-19, and subsequently the coronavirus pandemic caused more problems in the production and testing, because the national borders are/were closed and factories closed. NS states that „it is not known exactly what the ultimate impact of COVID-19 will be, but the commitment remains that passengers can board in 2021. As first, the ICNG EMUs will enter service as IC Direct on the Amsterdam - Rotterdam - Breda line. Then the Den Haag - Eindhoven line will follow.“

Alstom stated that the first ICNG deliveries are planned to take place in 2020. By mid-June 13 EMUs were built, which are all intended for test and validation activities and for NS staff training before delivery. The triple-voltage cross-border trains will be authorised after the ICNG trains for the Dutch network.

Additionally NS ordered two more eight-car ICNG trains fitted also for operation on 3 kV DC and equipped for operation in Belgium, which will be referred to as ICNG-B. NS ordered these units with the objective of speeding up the Authorisation to Place in Service (APIS) procedures.

On 5 August 2019 an option, worth 200 million EUR, was confirmed for 18 more of these triple-voltage eight-car EMUs, which will form a new NS Class 3300 (Nos. 3301 to 3320). The 20 Class 3300 EMUs, together with one of the original batch of 30 Class 3200 EMUs, which will be delivered as a Class 3300 unit (thus the fleet being numbered 3301 to 3321), will also be authorised for use on services to and from Belgium, namely between Amsterdam and Brussels, starting in 2025. The 3 kV DC equipment will be necessary to enable them to use the Belgian end of the HSL-Zuid, which in Belgium, between the border and the outskirts of Antwerpen, becomes Line 4.

In total NS will have 99 Coradia Stream EMUs. The Coradia Stream fleet will replace NS's Type ICRm rakes of carriages, designed for 160 km/h running, which will by then be almost 40 years old, and also the quadruple-voltage TRAXX MS locomotives used by NS and SNCB to top-and-tail these services. NS's TRAXX MSes are on lease from Akiem, Macquarie Rail and Alpha Trains, while SNCB has a batch of the same type on lease from Alpha Trains.