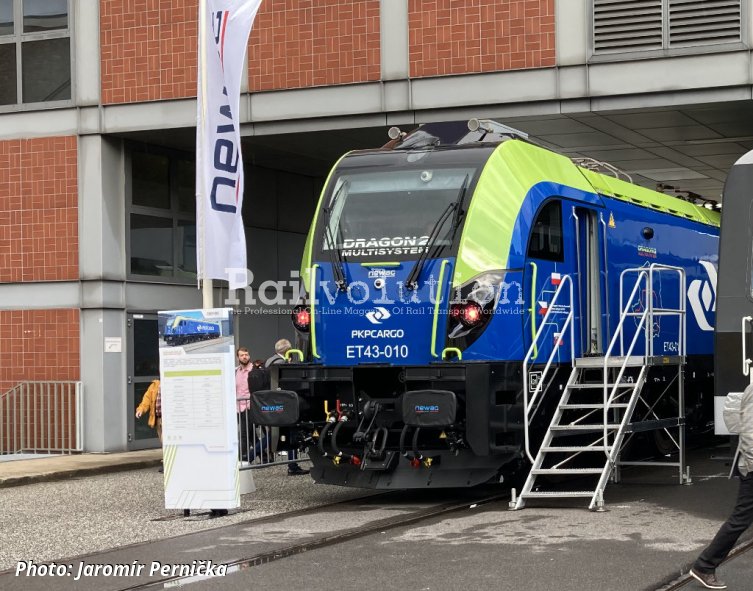 NEWAG exhibited a Type E6MST locomotive, better known by its commercial name Dragon 2. Specifically, it was the ET43-010 (3 260 012), or the representative of the batch for PKP CARGO, which ordered a total of 24 dual-voltage (3 kV DC and 25 kV 50 Hz) machines in September 2019. These are part of a contract for a total of 31 second-generation Dragons, in which the remaining seven are of the Class ET26 (3 160), 3 kV DC only, but fitted with the Last Mile module, which the operator received in 2020. These were preceded by a trio of PKP CARGO's Class ET25s (also 3 160), which are the 3 kV DC version without the Last Mile module.

Meanwhile, production of the Class ET43 is nearing completion and type approval with ERA is being finalised. For 2023, the intention is to place individual locomotives on the EU market in conformity with type, which will bring with it the possibility of use in the Czech Republic and Slovakia; the Class ET43 was first planned to be in service with PKP CARGO INTERNATIONAL (formerly AWT) from the beginning of 2023.

It should be recalled that in the first half of 2022, ET43-001 (3 260 003) was tested for compatibility on the networks of the Správa železnic and ŽSR networks, preceded by tests at VUZ Velim, during which ET43-001 achieved a starting tractive effort of 420 kN.