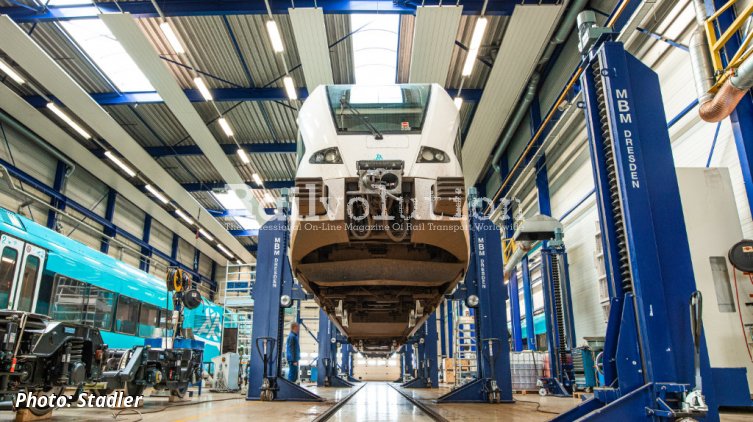 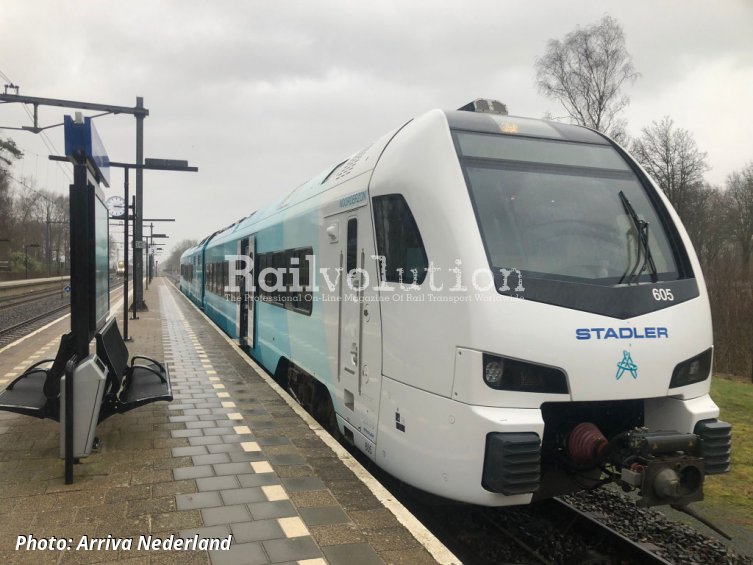 With the number of trains being maintained at Leeuwarden depot at an all-time high and more of them using batteries, Leeuwarden depot has been completely overhauled. A new ‘smart’ track has been laid and a dedicated container that can hold up to six batteries has been installed. Both the stores and the office area have been made bigger.

To celebrate the completion of the work, as well as the introduction of the WINK trains into passenger service last year, Stadler hosted on 28 October 2022 an event for key stakeholders, comprising speeches, a tour of the new depot and the opportunity to look around a WINK and GTW train.

One of the most significant improvements of the upgrade is the installation of a new, so-called ‘smart’ track, where several maintenance tasks can be carried out. Trains can be moved from outside to inside the depot using a special lifting jack and work can be undertaken on the roof, using a fixed staircase. Inside, the track has space for two trains, heightening productivity and efficiency. This new track means that there are now three tracks at Leeuwarden depot.

As both the WINK and the GTW trains use the battery power, a dedicated secure storage facility has been installed. It can hold up to six batteries, boasting state-of-the-art fire-retardant features to promote safety. The stores has been enlarged, in line with the higher number or trains and to accommodate the higher amount of spare parts required to ensure that trains can be maintained quickly and efficiently. Similarly, the office space has been expanded, as there are now 40 members of staff, twice as many as there were in 2013, when Stadler assumed responsibility for the depot.

The two fleets of trains, both built by Stadler for Arriva Nederland and maintained at Leeuwarden depot, are the 18 new WINK units and the 50 refitted GTW 2/6 and 2/8 DMUs, which were introduced in service in 2005 and named SPURT. The WINKs are tri-mode units, fitted with the 1.5 kV DC traction equipment (not used at present), with the diesel engines running on hydro-treated vegetable oil (HVO), and with the traction batteries. Arriva Nederland introduced them into passenger service in April 2021 and they serve the Noordelijke Lijnen concession.

In February this year, Stadler, Arriva Nederland and government partners undertook tests on a modified WINK, demonstrating that trains are able to operate solely with batteries on non-electrified lines. Stadler undertook a comprehensive overhaul of the entire fleet between 2020 and 2022 (the two "prototypes" were rebuilt 2018 - 19), making them more comfortable for passengers and installing recuperation batteries. This allows trains to shut down the diesel engines when they are at a standstill, which cuts carbon emissions.

Voith Rail Services first opened the facility in 2006. Stadler took over in 2013 with 43 trains and 20 employees. It now looks after 68 trains and has 40 employees. In 2020, Arriva Nederland extended its contract with Stadler to 2035.

Stadler has sold 286 trains to clients in the Netherlands, including Arriva Nederland, QBuzz, Keolis, NS, Abellio and Connexxion. It is responsible for servicing more than 150 trains and has around the same number of employees. Stadler services trains in Leeuwarden, Venlo, Hengelo and has a re-fit location in Blerick. The headquarters are in Apeldoorn.

We asked Stadler and Arriva Nederland and on 10 November received answers as follows:

1) What power is installed in the batteries?
"Recuperation batteries have power of 2 x 30.5 kWh. When working in electric/battery mode, the WINKs have power of 1,000/748 kW. (The power of 748 kW is the same like in the WINK's diesel mode.)"

2) Since what date the WINKs and the GTWs use the battery power in regular pasenger service?
"Currently, these batteries are not used during the operation. The batteries are only used when trains are staying at a station for more than 5 minutes (ESS modus). When the WINK’s and the refurbished GTW’s are out of operations the power converters are used."

3) On how many trains a day is the battery used? How many km daily (in average) each of the trains use the batteries?
"We have 18 WINK’s and 43 refurbished GTW’s which are equipped with the batteries and can use the ESS modus in stations".

4) Have you quantified the diesel and CO2 savings from running the WINK and GTW trains on batteries?
"No. But we have a collaboration with TU Delft. Together we have developed a software, the CO2 barometer, to calculate expected CO2 emissions. We haven't deployed the software yet."

5) Is there any consideration now being given to electrifying any of the lines served by WINKs to make use of their 1.5 kV DC traction equipment?
"There are no infrastructure development planned to electrify train lines in the north of the Netherlands."

Thus we asked again: if it was recently stated that "in February this year, Stadler, Arriva Nederland and government partners undertook tests on a modified WINK, demonstrating that trains are able to operate solely with batteries on non-electrified lines", why the battery mode for traction is not used?

Arriva Nederland subsequently added: "We just tested with batteries that were charged on the electrified route and then with the full battery could cover the non-electrified route. We did that with the WINK where modifications were done to make possible its batteries suitable to work for traction. And why the WINKs still run on HVO is simply because we are dealing with non-electrified routes. For running with battery trains, we depend on our client the province of Overijssel. They determine which equipment we have to use."

We can add that this situation has to do with the fact that ProRail and the Overijssel Province have announced recently to postpone plans to introduce BEMU operation indefinitely „after several months of test operation“. As stated by Bert Boerman, Executive member of the Overijssel Province responsible for Mobiliteit, water en klimaatadaptatie (Mobility, water and climate adaptation): „At the last minute, the costs turned out to be significantly different from what was reported.“

According to him: „The purchase of the BEMUs was to cost about half of that for the electrification of the lines. But ProRail said the cost of the BEMU operation did not include building infrastructure to recharge the battery trains, which made the economics of the whole project much worse. The province therefore prefers to push the state to fund the electrification of the lines where the battery train was to run.“

However, it should be made clear that there were in fact no „several months of test operation“, because  the only tests with the BEMU in the Overijssel Province have been carried out only in late February 2022 on the Almelo - Mariënberg line with the WINK 605, which was specially fitted with the traction batteries - see here. This followed an information from late August 2021, when ProRail, Arriva Nederland and the provinces of Overijssel, Gelderland and Fryslân announced that they are working together to test and introduce battery operation of WINKs.

We therefore asked Bert Boerman, what exactly is „the last minute“ and what exactly „turned the costs so significantly“. We also asked him for the concrete economic and technical calculaction of the respective WINK tested in the BEMU mode that led to this negative conclusion.

Moreover, we asked Bert Boerman and ProRail if it seems normal for both, not to calculate the cost of charging infrastructure when planning the operation of battery trains. And finally we asked both for comparison of specific cost for electrifying lines and operating EMUs, and for building charging infrastructure and operating battery trains. We are waiting for an answer.

On the basis of these developments, it has to be said that the result of this is that Arriva Nederland and respective provinces have the tri-mode WINKs, suitable for working as the EMUs under 1.5 kV DC, as the BEMUs and as DMUs, but they are still operated only in the diesel mode (we do not take the ESS modus seriously in this respect). In other words, there are 18 WINKs that carry traction equipment for 1.5 kV DC (and its weight) - unnecessarily, that are technically ready for battery operation - unnecessarily, and that still run on internal combustion engines only. And it seems it will so continue for an indefinite (endless?) period of time.

All this points to something being amiss in the transport policies of the provinces concerned - see here, all the more so when they mix in considerations of running hydrogen trains, which are even more costly than EMUs or DMUs, and this only after the short testing of the iLint - see here. So let's be surprised what direction further developments in passenger rail transport will take here...

On 17 November 2022, ProRail answered us only: "ProRails response at this point is that both the battery train and full electrification are still options and there is sufficient time taken to properly compare them."

On 18 November 2022, Ingrid Heijman-van Dijk, Spokesperson for Mr. Boerman answered us: "A proposal for the Provincial Council is currently being prepared. Seen in this light, I cannot share any further details about it now. But know that both the battery train and electrification are still options."

We therefore asked on 18 November to explain, why Mr. Boerman expressed in media that ... „after several months of test operation“… „At the last minute, the costs turned out to be significantly different from what was reported.“ And we therefore asked again to answer in detail our initial questions: what exactly is „the last minute“ and what exactly „turned the costs so significantly“.

We also asked for the concrete economic and technical calculaction of the respective WINK tested in the BEMU mode that led to this negative conclusion. And finally we also asked again for comparison of specific cost for electrifying lines and operating EMUs, and for building charging infrastructure and operating battery trains. We are again waiting for an answer.