Nestlé Waters France To Use The Hydrogen-Powered Freight Trains 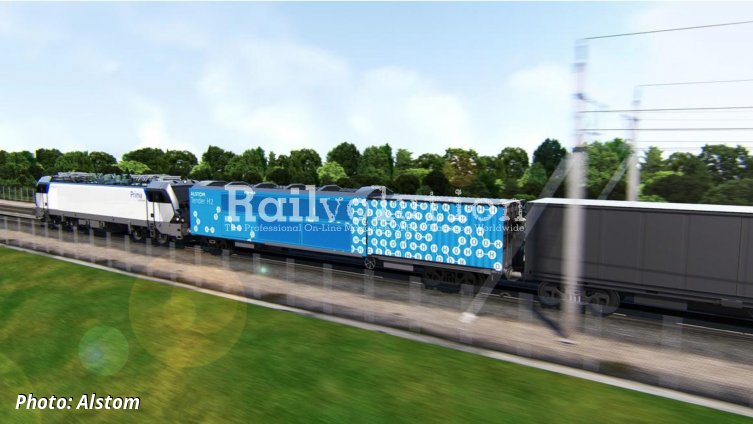 Nestlé Waters will be the first company in Europe to benefit from the hydrogen fuel cell solution for massified rail freight, including renewable hydrogen supply, developed by Alstom and ENGIE. As a significant innovation, the new hydrogen solution will be developed from a high-powered fuel cell system that can power electric locomotives in non-electrified areas.

From 2025, this freight train powered by electricity from the rail network and from hydrogen in non-electrified sectors will aim to progressively ensure the transport of VITTEL natural mineral water between the factory located in the Vosges and its various distribution centers in France (i. e. Vittel - Arles 600 km and Vittel - Montreuil-Bellay 760 km).

The dual-mode solution will be composed by a generator wagon (in the picture designated Tender H2) incorporating a high-power fuel cell system powered by renewable hydrogen and an electric locomotive, all connected by an electrical power cable. The generator wagon will be able to supply the locomotive with electricity without the need for any catenary. "At Nestlé Waters, we favour rail freight whenever possible. We are constantly looking for efficient solutions to reduce the carbon impact of our supply chain," said Sophie Dubois, Chief Executive Officer of Nestlé Waters in France.

Nestlé Waters will be the first company to benefit from the hydrogen fuel cell solution for rail freight, including renewable hydrogen supply, developed by Alstom and ENGIE under a partnership  announced in April 2022. This solution aims to replace the diesel-powered locomotives, currently used on most lines in France and most European countries. The high-power hydrogen fuel cell system developed by Alstom will power electric locomotives in non-electrified areas and offer a 100 % electric solution for rail freight, end-to-end, including to the first and last kilometers, which are rarely electrified.

This solution will make it possible to carry out all freight journeys with the same electric locomotive, powered by the catenary on electrified main lines and by the Tender H2 in non-electrified areas. ENGIE will supply the renewable hydrogen for this solution through the deployment of an innovative supply chain.

This project with Alstom and ENGIE is the latest for Nestlé Waters, which has long favoured rail in its logistical approaches to minimize the environmental impact of transport, equivalent to a quarter of its carbon footprint. While for French industry, the share of rail freight represents on average 8 - 10 % of the volumes transported, for Nestlé Waters in France, it represents nearly 45 % of the volumes of the Vosges factory.

In 2018, Nestlé Waters joined the FRET21 approach and signed an agreement with the French Agency for Ecological Transition (Agence de la Transition Ecologique - ADEME) to take action to reduce the carbon footprint of its product transport flows in France. In 2020, the group set a further target of reducing its transport-related CO2 emissions in France by 13 % by the end of 2022. This ambition is based on the following concrete actions:

- In 2018, the opening of a railway line between its PERRIER plant and the port of Fos-sur-Mer, reducing the passage of 27,000 trucks per year.
- In 2019, the introduction of the EURODUAL locomotive, which has saved 1,920 tonnes of CO2 equivalent per year compared to a diesel locomotive.
- In 2021, the Glass Train project, which promotes the transport of VITTEL and S. PELLEGRINO returnable glass bottles by train, reduces the passage of 1,000 trucks per year.

The initiatives led by Nestlé Waters since 2020 have already made it possible to reduce almost 11 % of the carbon emissions from transport, or about 5,900 tons of CO2 equivalent by the end of 2021. All these actions contribute to the Nestlé Group's ambition of zero net greenhouse gas emissions by 2050 at the global level.

In addition to the general disadvantages resulting from the application of hydrogen in transport, the proposed solution also hides operational problems consisting in handling the hydrogen „tender“ at the end of each route, where it will have to be run round by the locomotive to change the direction of travel.

We therefore asked Alstom how it envisages organising such an operation, since the European railway is now looking for ways to save manpower during the shunting (via the DAC), which in this case will be even more difficult since the Tender H2 will also be connected to the electric locomotive by a high-voltage cable.

Alstom answered us: "The locomotive will be electrically and mechanically coupled to the Tender H2 for the complete route, in order to power the locomotive on the first and last miles non-electrified. At each end station, the Tender H2 will be uncoupled and moved to the other side of the locomotive, during the train wagon composition operations."