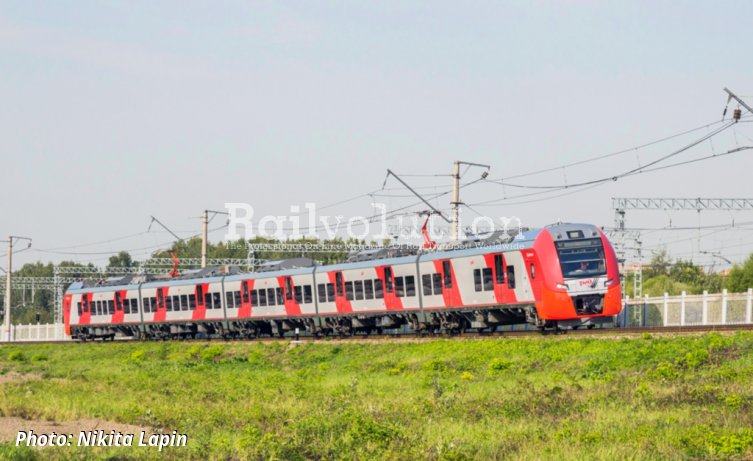 Also present at the fair was the five-car Lastochka ES2G-136, which ran on the circuit in „bespilotny“ mode (without a driver). This is because this EMU is equipped with a „machine vision“ system, which is the first step necessary for unattended (automatic) operation. In this case, Lidar, radar and cameras sensing in the visible and infrared spectrum are used, which was already presented at the Shcherbinka fair in 2019, on the ES2G-113.

This system was developed by the NIIAS institute at the request of the RZD with the support of technicians from the UL and has been undergoing tests on the MTsK (Moskovskoye tsentralnoye koltso, Moskva ring railway) roundabout since 2019.

According to NIIAS representatives, the technological solutions used in Lastochkas are unparalleled in the world and are several years ahead of foreign countries. Pavel Popov, Deputy CEO of NIIAS, says: „We have been implementing the unmanned operation programme since 2017. The E2SG EMU with the GoA3+ automation level has so far covered more than 5,000 km on the MTsK lines. A prototype of a fully functional automated traffic management system has been implemented, interfacing with a safe passenger boarding system and stationary obstacle detection complexes. The object detection range is 600 m and an automatic sensor cleaning system has been installed.

The immediate plans for 2022 are to complete and harmonise the regulations. An analysis of the current legal framework in the Russian Federation revealed no direct prohibitions on automatic and remote operation. At the same time, it is necessary to obtain a number of compliance certificates, remove indirect regulatory restrictions and amending certain documents. The analysis of the developments carried out at Siemens, SNCF and DB shows that Russia is several years ahead of its closest competitors.

At the same time, there is no single vision of the problem in both Europe and Russia, and it is not certain that we should seek to eliminate human involvement in train driving altogether. We are working on automated systems and we can already identify their advantages and disadvantages at this stage. On the positive side, there are lower operating costs due to lower wear and tear and energy consumption, and greater operational safety due to the elimination of human error.

The disadvantages are high investment costs, long lead times and slower economic benefits, which are only achieved in large projects. And of course there is an inevitable link: the more open and uncontrolled the railway line, the more complex and expensive the unmanned train control system.“