KISSes For ZSSK To Be Ordered 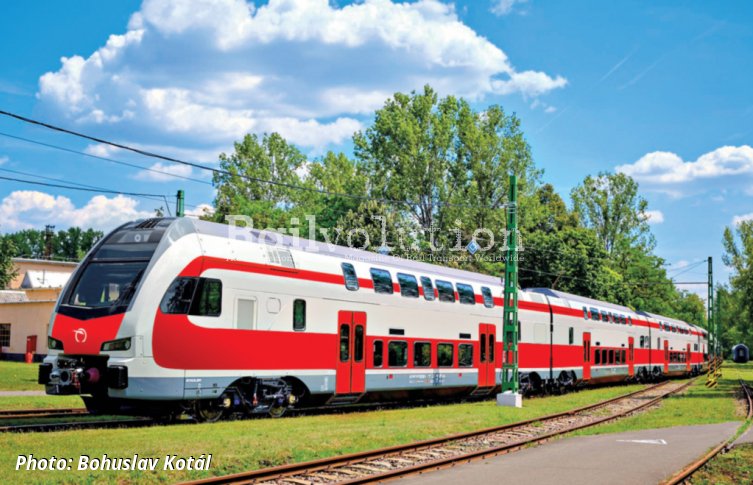 On 2 August 2021, Železničná spoločnosť Slovensko (ZSSK) announced that Stadler Polska, Siedlce, was selected as the supplier for four six-car double-deck EMUs for regional transport in a tender announced on 15 July 2020 with its KISS type. This should be a design similar to that for MÁV-START, as our editorial collage inspired by the existing ZSSK livery suggests.

The KISSes are to have traction equipment only for the 25 kV 50 Hz voltage, representing the first such case for ZSSK's new EMUs (so far only dual-voltage units - the Classes 671 and 660/661 built by Škoda - have been purchased for the 1,435 mm gauge). Their maximum speed will be 160 km/h and they are to have a capacity of 560 passengers, of which 30 in first class. They are intended for regional express trains (RR) on the Bratislava - Nové Zámky, Bratislava - Kúty and Bratislava - Žilina services.

The last-mentioned service will be fully possible by the new KISSes only after the completion of the power supply conversion from 3 kV to 25 kV on the stretch of line between Púchov and Žilina, the date of which is very unclear. However, this will definitely not happen prior 2023, when the delivery of the KISSes is to be completed in October (if everything goes according to the current plans). It is currently assumed that the line from Púchov to Žilina will be converted to 25 kV in the second half of 2025, and it is not yet clear whether this also applies to the Žilina station.

The ZSSK deadline for submitting bids for the new double-deck EMUs was set to 17 May 2021. The contract was initially expected to be signed in August 2021, but it is currently envisaged to happen later, according to Tomáš Kováč, ZSSK spokesman: „The signing of the contract with the successful bidder is scheduled for October 2021, and all the necessary administrative tasks are currently underway. As part of the public procurement process, the bidders had, of course, a deadline to appeal against the result, but none of the bidders took advantage of this possibility.“ Let us specify that the second tenderer was Škoda Transportation.

The estimated value of this contract is 76,955,000 EUR, with co-financing from EU funds. It is planned that ŽOS Vrútky will be subcontracted (4 % of the contract value), which will provide radio stations, passenger information systems and authorisation of KISSes for Slovakia.