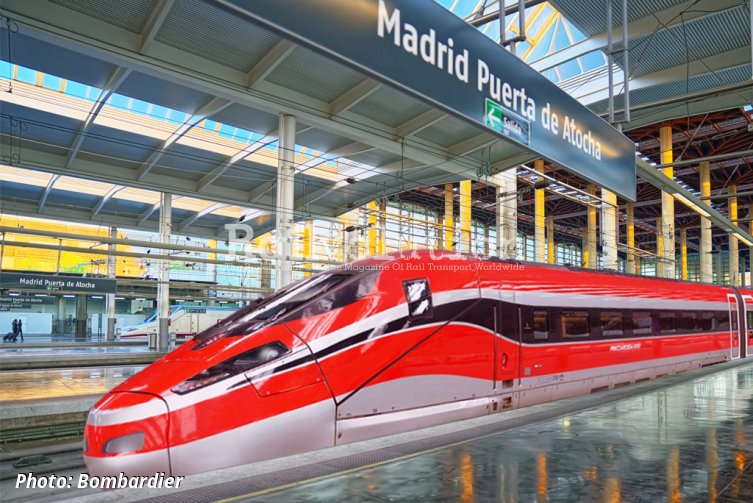 On 10 August 2020 Hitachi Rail and Bombardier Transportation announced a contract with Trenitalia to supply 23 Class ETR 400 high speed trains for ILSA (Intermodalidad de Levante SA). The contract was signed on 6 August and is worth 797 million EUR, of which 319 million EUR is part of Bombardier.

The TSI compliant trains from the V300ZEFIRO platform will be similar to that which are operated by Trenitalia since 2015 and designated ETR 1000 or Frecciarossa 1000. This is a follow-on order to that for 14 more units for Trenitalia, awarded in June 2019.

The new ILSA trains will be designed and built by Hitachi Rail and Bombardier in Italy. Each 360 km/h eight-car unit will be approximately 200 m long, with capacity for around 460 seating passengers. There will be also a bistro area. We asked the consortium for the exact delivery times of the trains, and if Bombardier/Hitachi will provide their maintenance.

The consortium answered us that deliveries of the ILSA trains will start in September 2022 and that the contract includes activities of warranty assistance.

ILSA has been selected by the infrastructure manager Adif as the first private operator to be granted access to the Spanish long distance rail market. From 2022, ILSA plans to run high speed services on the Madrid - Barcelona, Madrid - Valencia/Alicante and Madrid - Seville/Malaga lines.

ILSA was initially a subsidiary set up by Air Nostrum. In September 2018 it received approval for its open access high-speed passenger services in Spain. On 26 February 2020, the European Commission announced that it has decided under Article 6(1)(b) of the EU Merger Regulation to approve the acquisition of Intermodalidad de Levante by Operador Ferroviario de Levante and Trenitalia.